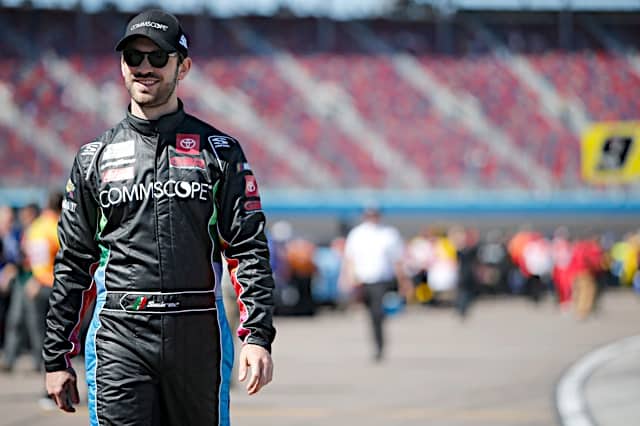 The team will field the No. 99 Chevrolet Camaro in an alliance with Richard Childress Racing.

“I see in Trackhouse a great opportunity for me with a very strong group of people that share the same vision, commitment and goals that I have,” Suárez said in a release. “Justin has been involved in the racing world for over 20 years and understands the ins and outs of the sport both as a driver and from the business side. I have learned a lot in the last few years and have been very fortunate to be a part of very good organizations.

“I have learned that this sport is about people, and I know we are going to work very hard to put together a talented team. Furthermore, getting the support from a strong manufacturer like Chevrolet will be a key to our success. My goal is simple, I want to win races.”

Ty Norris is president of racing operations for the organization.

“I believe deeply in the direction NASCAR’s executive group is taking the sport,” team owner Marks said. “There is a disruptive and courageous vision for the future taking place that is displayed by the incredible 2021 racing schedule and new ways of looking at a sustainable economic model culminating in the debut of the 2022 NextGen car that, in my opinion, will lay the groundwork for a dramatic value proposition for future owners, media partners, stakeholders and sponsors for decades to come. Everything Trackhouse will be doing in 2021 from a business development standpoint will be in the context of positioning ourselves to win races and championships as NASCAR embarks on a new chapter in 2022 and beyond.”

Suarez currently competes for Gaunt Brothers Racing and recently announced he would be parting ways with the team at the end of the season. Previously, he drove for Joe Gibbs Racing from 2017-18 and Stewart-Haas Racing in 2019.

The team will have a charter for the season, though whose charter it has acquired was not disclosed at press time. The charter in question was acquired by Spire Motorsports, which in turn leased it to Trackhouse. Spire has two charters left in its possession and plans to run two cars in 2021.

Sponsorships and the crew chief will be announced at a later date.

Big get for Trackhouse. With Suarez off the table, I have to think RPM might be the one selling their charter. I doubt Trackhouse is buying Hendrick’s charter for the 88, unless they’re leasing it. If RPM is still around, they need someone with some money. Corey LaJoie has some sponsors, but not a ton. Not sure BlueEmu would bankroll Landon Cassill enough to help RPM to the degree needed. Not sure Justin Allgaier or Michael Annett have the backing to make that move and whether they’d want to tool around Cup around 25th place. Brandon Jones, maybe. Might require change to Toyota.

Rick Ware selling a charter would be possible. That team converting 4 teams to new cars in 2022 seems steep.

Surprised Childress would support a car where Ty Dillon isn’t the driver given the fact that he has no ride next year.

Suarez’s career is dying if he keeps taking 3rd tier rides. I wonder if he had the opportunity to go to a top tier Xfinity team.

Jill P
Reply to  Bill B

RCR lost Germain, so it’s not really a surprise. I’m sure Childress is trying to get Ty a ride at RPM so they don’t disappear as well.

Suarez career has already died. If you cannot produce a single win driving for the 2 best teams, you are as good as dead. He will ride out the rest of his days as a backmarker.

There are still several legitimate options for RPM, biggest name being Kyle Larson. Are we sure Hendrick is willing to take a chance on him ( I personally think so). But outside of that, there is still Erik Jones, and Matt DiBennedetto (most likely) who would both be clear upgrades over BW.

There are driver options, but it’s not the 90s where full-season sponsors were plentiful. RPM needs sponsorship and money talks. Jones brings nothing. DiBenedetto brings no sponsorship. Larson isn’t going to bring sponsorship. Ty Dillon brings no sponsorship. LaJoie brings a little. Allgaier would bring more. Annett would bring more. If Blue Emu were committed to Cassill, that might be something. Brandon Jones brings actual money. Suarez and the sponsorship he brings is something, which makes him passing on RPM for a new team interesting. It makes me really wonder if Trackhouse has purchased RPM’s charter and RPM’s demise is imminent. I hope not, but unless RPM has some major sponsorship on deck without Bubba Wallace…

I believe I read that Trackhouse is leasing the 95 charter from Spire.

“… who would both be clear upgrades over BW”

Careful, you might be labeled as raaaaayyyyycist for having something other than the pc allowable opinion. Worse, you might be called a quasi-raaaaayyyycist (whatever the hell that is).

Does that mean they were “ty”ed together?

I only read the replies because the poster’s are so funny with their theories. The main story journalists don’t know much history of the sport.
Enough with the Kyle Larson predictions. Let’s not forget BW personal history in this sport. What a media whore. Does he have no shame with some of his admissions? Phil, you’re still doing a good job.