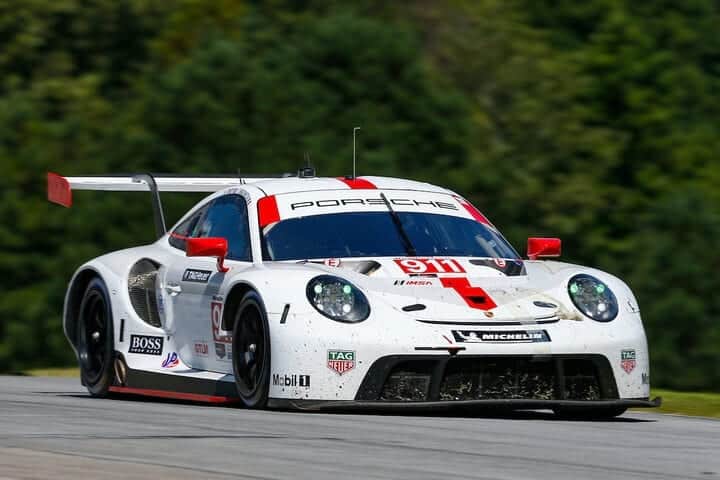 Saturday night will see the IMSA WeatherTech SportsCar Championship’s GT classes tackle Charlotte Motor Speedway’s ROVAL for 100 minutes of racing.  It will be the first major sports car race at Charlotte Motor Speedway since the American Le Mans Series raced there in 2000.  A season-low 18 cars are entered to take the green flag.

In the GT Le Mans class, Porsche GT Team is back on the grid after missing Mid-Ohio due to a mini COVID-19 outbreak at Le Mans.  There will be no changes from normal.  As a result, Frederic Makowiecki and Nick Tandy will be in the No. 911, while Earl Bamber and Laurens Vanthoor will be in the No. 912.

In the GT Daytona class, there will be 12 cars entered.  There are two changes of note here.  Michael de Quesada has been tapped to share the No. 12 Lexus with Townsend Bell, replacing Frankie Montecalvo.  Don’t worry, it’s for a good reason.  Montecalvo’s getting hitched.

.@Michaeldequesada will sub for @Fmontecalvo in the No. 12 #LexusRCF GT3 at the Charlotte Roval this week. Frankie will miss the race due to his wedding which was scheduled before IMSA's reordering of the 2020 schedule due COVID-19.

Montecalvo will likely be back in the No. 12 for the Motul Petit Le Mans at Michelin Raceway Road Atlanta on Oct. 17.  On the other hand, there’s a more long-lived driver change at Compass Racing.

While it doesn’t actually say this on the entry list, Corey Fergus will not be in the No. 76 McLaren 720S GT3 for the remainder of the 2020 season.  During the broadcast of the Acura Sports Car Challenge at Mid-Ohio, the commentators noted that Fergus’ wife is pregnant with her first child.

“When we started the season, the Sprint Cup would have been finished by October and there wouldn’t have been a conflict,” Fergus stated in a Compass Racing press release.  “With the schedule as it now stands, I’d likely end up missing the birth of my daughter, which I’m loathe to do.”

To give Fergus the necessary time to spend with the mother of his child, Compass Racing has tapped Jeff Kingsley to replace him in the McLaren.  Kingsley is the current points leader in the IMSA Porsche GT3 Challenge Cup, having won six of nine races so far this season.  For Kingsley, this weekend will mark his IMSA WeatherTech SportsCar Championship debut.

The Motul 100% Synthetic Grand Prix is scheduled to go green just after 8 p.m. ET Saturday night.  The race will air live on NBCSN.