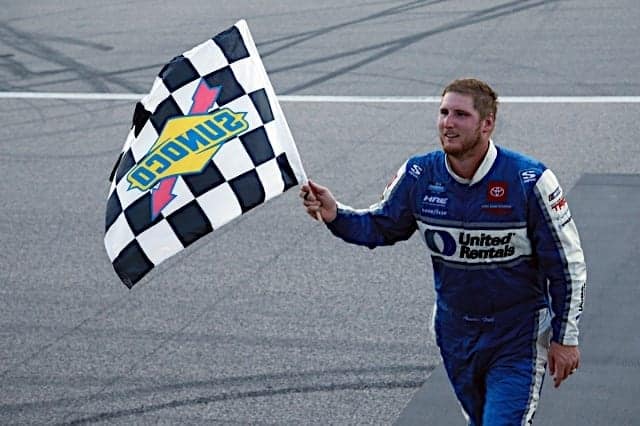 When the Gander RV & Outdoors Truck Series heads to Kansas Speedway next weekend to open the Round of 8, GMS Racing and ThorSport Racing will make up seven of the eight drivers looking to make their way into the Championship 4.

While it seems like GMS has really stolen the show in the Truck Series this year, the numbers for its full-time efforts are comparable to those of ThorSport’s, not including the part-time efforts of the No. 24 GMS truck. Both teams have five wins and 43 top 10s, but ThorSport actually has the edge with 25 top fives to 16 for GMS.

GMS makes up half of the current playoff field with Sheldon Creed, Zane Smith, Brett Moffitt and Tyler Ankrum compared to three for ThorSport in Grant Enfinger, Ben Rhodes and Matt Crafton. Johnny Sauter, the fourth driver for ThorSport, has had an absolutely dismal season and didn’t make the playoffs at all.

Meanwhile, Austin Hill looks to play spoiler and find his way into the battle at Phoenix Raceway. Driving for a single-truck team in Hattori Racing Enterprises that already has a championship to its name from Brett Moffitt in 2018, Hill has improved on his 2019 numbers, despite the lack of practice and qualifying this season.

Last year, when Hill took over the No. 16 Toyota, he scored four total wins, two of which came in the playoffs at Las Vegas Motor Speedway and the finale at Homestead-Miami Speedway. But by the time the win at Homestead came, Hill was already eliminated from the championship battle after a challenging Round of 6 where finishes of sixth, 26th and 13th left him six points out of the Championship 4.

Fast forward to this season and Hill has just two wins but nine top fives and an impressive 15 top 10s in 19 races. In fact, Hill leads the series in top fives and top 10s this season. But his playoff run didn’t start all that impressive when early contact, combined with brake issues, made the trip to Bristol Motor Speedway a long one that ended in a 26th-place finish.

“You’ll have some setbacks like that during the playoffs,” Hill said after that race. “It’s just a matter of how you respond and fight back from those issues. I truly feel like this is the best team in the garage and we can come back from anything.”

The response after that 26th-place finish? Hill’s second win of the season at Las Vegas Motor Speedway the following week. And as it turned out, that victory proved to be a little more important after getting caught up in a late-race crash at Talladega Superspeedway last weekend.

But perhaps what’s most important to pay attention to in these coming weeks is where the Truck Series is racing. This round of the playoffs begins at Kansas next weekend, the same track where Hill won the first of a doubleheader earlier this season. His finish in the other race at the mile-and-half oval that weekend? Sixth, which is actually his worst result at Kansas since joining HRE in 2019.

After Kansas, another mile-and-half in Texas Motor Speedway comes up. Remember, both of Hill’s wins this season have come on mile-and-half tracks. In fact, four of his six career wins are on mile-and-halves (two at Las Vegas and one each at Kansas and Homestead-Miami). And while Texas wasn’t too kind to the No. 16 team earlier this year, a race where Hill struggled for speed and ultimately scored a DNF due to motor troubles, he did finish eighth in the fall race last season.

And that’s probably a good thing considering Martinsville hasn’t been all that kind to Hill. Through nine career starts at the track, he has just two top 10s and an average finish of 17.3, and both of those top 10s came while he raced for Young’s Motorsports. Since joining HRE, Hill’s best result at Martinsville is 16th last April. He crashed out of the playoff race last season, a DNF that ultimately led to Hill’s elimination from the championship battle.

As the playoff field heads toward being dwindled down to the Championship 4, Hill’s point advantage shrinks tremendously and he currently leads fifth-place Brett Moffitt by just eight markers.

Certainly, a win over the next three races are ideal, but given his prior history at two-thirds of the tracks in the next round, rest assured Hill isn’t going down without a fight, and he’ll certainly give both GMS and ThorSport a run for their money.

NEWS!!
Update on my Heath and Racing! I love you all so much and thank you for all the kind words and prayers! I will be back in the car soon?? pic.twitter.com/YFKSSrUsEd