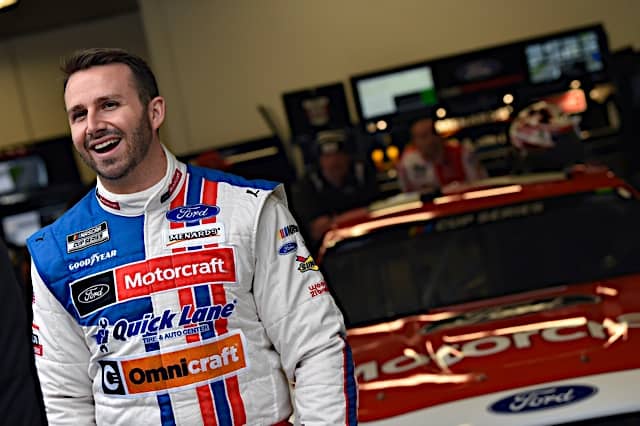 The realm of sports is often home to feel-good stories, but they frequently prove fleeting in nature.

Given the industry’s sponsorship-focused business model and frequent need for immediate return, that’s arguably more true in motorsports than any other industry.

It’s because of that truth that deals like Thursday’s (Oct. 8) second opportunity for Matt DiBenedetto in the NASCAR Cup Series can elicit such joy from the NASCAR community.

DiBenedetto, 29, is something of a rarity in the NASCAR space. He’s one of the few ones to stick around long enough and catch enough breaks to work his way to a competitive Cup ride without a meteoric rise through the traditional ladder system or host of wealthy backers.

He was a Joe Gibbs Racing prospect in the early 2010s and won races in the ARCA Menards Series East from 2009 through 2011 but quickly fell off the radar as the decade got into full swing.

The Californian toiled around the Xfinity Series from 2012 through 2014, often starting-and-parking for teams like The Motorsports Group and TriStar Motorsports. It wasn’t glamorous work, but it kept DiBenedetto on the scene long enough to make it to the Cup Series with BK Racing in 2015.

Since then, DiBenedetto’s done just enough to hang around and steadily move up the Cup ladder, running full time since he entered the fray at BK. He gave that team a shock top 10 at Bristol Motor Speedway in 2016, departed for a two-year stint at Go Fas Racing from 2017 through 2018 and then took a leap of faith that landed him at Leavine Family Racing in 2019.

Each move signaled a step up in performance. At BK, DiBenedetto was left looking for minimal gains in the back of the pack, increasing his average finish from 32nd to 30th and tallying three more lead-lap finishes. GFR lifted DiBenedetto to an average result of 27th and his first top-30 points finish, with a 29th-place effort in 2018.

LFR proved to be a major step forward, yielding a trio of top fives and an 18.3 average finish. The No. 95 didn’t quite stand among the tour’s top teams, but it gave DiBenedetto a ride that could run with the leaders on a good day. He showed that early in leading 49 laps of the Daytona 500, then came heartbreakingly close to a victory in the Bristol night race late in the summer.

After a decade of effort, DiBenedetto looked capable of being a playoff contender. But he was ultimately just a placeholder. Christopher Bell, a successful JGR prospect and graduate of the Toyota Racing Development feeder system, was announced as his replacement for 2020 in August 2019.

DiBenedetto found himself at risk of falling out of a competitive opportunity just as he was coming into the spotlight as a genuine contender. But he secured a lifeline at Wood Brothers Racing when Paul Menard elected to retire early at the end of 2019.

Menard had a year left on his contract. His family’s Menards stores are a major sponsor of both the No. 21 and various Team Penske entries. That gave him input on the team’s driver decision for 2021. He told them to “go get Matt,” according to team owner Eddie Wood. So they did.

That gave DiBenedetto the best ride of his career to date heading into this season. But it also left him in the same place as he’d been in with the No. 95 team just last year.

Wood Brothers Racing is a historic organization, one win away from 100 victories in a lengthy NASCAR tenure. But the No. 21 team operates in an alliance with Team Penske these days, sometimes serving as a host for the organization’s prospects when Penske proper doesn’t have any openings.

Such was the case for Ryan Blaney from 2015 through 2017, with the future Penske star completing two full seasons after a partial run in 2015 before making the move over to the No. 12 car for 2018.

There hasn’t been anyone waiting in the wings and clearly ready for the past three years, but that wasn’t the case for this year’s silly season. Austin Cindric has broken out in his third full-time year at the Xfinity level, claiming five wins and 17 top fives en route to the regular-season crown. He’s one of two favorites for this year’s championship, joining fellow Ford prospect Chase Briscoe.

Cindric seemed an obvious candidate for a leap up to Cup heading into 2021, with the Wood Brothers rumored as a potential spot for a full-time landing. Even with his family ties, no one would have blamed the company for making that move either with his results.

But DiBenedetto made a strong case for himself to keep the ride throughout the year. He’s yet to visit victory lane but has proven to be a consistent contender and managed to crack the playoff field in 16th. That berth ended in a first-round elimination, but DiBenedetto bounced back from that with a second-place run at Las Vegas Motor Speedway and a near-win at Talladega Superspeedway in successive weeks.

That made the choice difficult for both WBR and Penske. But the group made a fair compromise.

DiBenedetto will get one more year with the No. 21 team in 2021. Cindric will have to settle for full-time Xfinity competition but will also get to make select Cup starts and is already announced as DiBenedetto’s replacement in 2022.

Both drivers win and lose something from the deal, but this time DiBenedetto isn’t left out in the cold like he was with the No. 95 team one year prior.

Cindric has to settle for one more year in NASCAR’s second series but can gain experience and make a name for himself in his handful of Cup starts while knowing his future is secure. He’ll be able to enter Cup full time just as the NextGen car is debuting in 2022.

DiBenedetto doesn’t see his playoff berth and recent potential for wins go to waste. His future beyond 2021 remains uncertain, but he gets one more year to work with his group and show other team owners, potentially even Penske, what he can do.

In a sport that so often leaves drivers and teams scrambling — see Daniel Suarez in 2019, Erik Jones this year and surely someone else next year — both Penske and WBR, along the relevant sponsors, have reached a compromise that benefits both DiBenedetto and Cindric.

Time will tell if DiBenedetto can make anything of the extra year. But at least he gets a chance to do so.