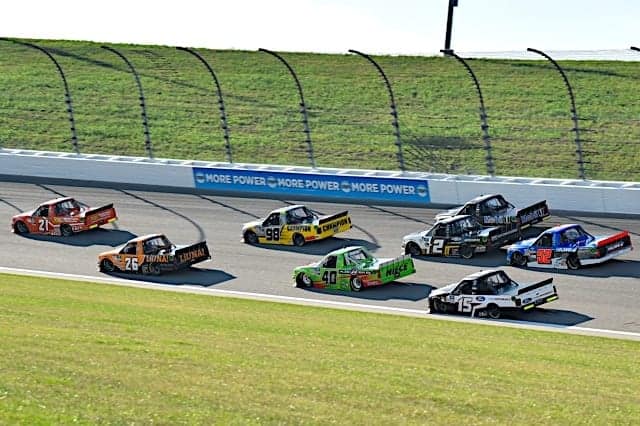 Kansas Speedway will host the NASCAR Gander RV & Outdoors Truck Series for the third time this season, and 36 drivers are entered for the second race in the Round of 8.

As previously announced, Hailie Deegan will make her Truck Series debut, driving the No. 17 DGR-Crosley Ford.

The No. 52 Halmar Friesen Racing Toyota is listed as driver TBA, as Stewart Friesen previously announced he will not compete in this race due to a conflict with another race on his schedule.

Both Reaume Brothers Racing entries, the Nos. 00 and 33, have drivers listed TBA.

Chase Purdy will drive the No. 24 GMS Racing Chevrolet. He has one top 10 this season in a limited schedule, 10th in the most recent Truck race at Kansas.

The Niece Motorsports driver lineup will consist of Ryan Truex in the No. 40, Colin Garrett in the No. 44 and Trevor Bayne in the No. 45. Bayne will drive the No. 45 for the rest of this season.

The Clean Harbors 200 will take place on Saturday, Oct. 17, preceding the NASCAR Xfinity Series race later that day. The Truck Series race is set to begin at 4 p.m. ET with TV coverage provided by FOX.