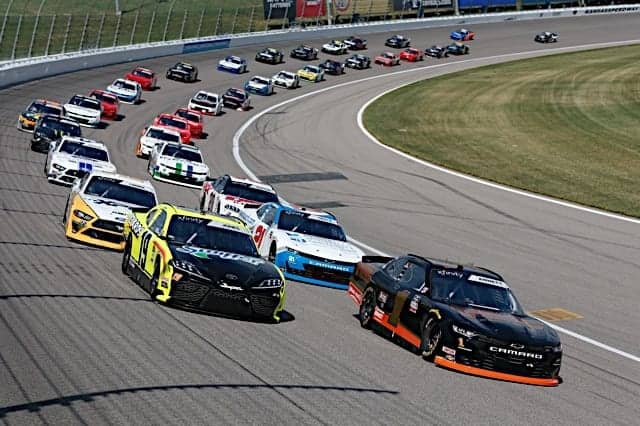 Thirty-six drivers will compete in the first race of the NASCAR Xfinity Series Round of 8 at Kansas Speedway in the Kansas Lottery 300.

Anthony Alfredo will drive the No. 21 Richard Childress Racing Chevrolet. In his first season racing part time in the Xfinity Series, he has one top five and eight top 10s. He earned his career-best finish of fourth in the first race of the doubleheader at Homestead-Miami Speedway.

Two of the three seats for BJ McLeod Motorsports entries are listed as TBA. Matt Mills will drive the No. 5 Toyota.

Daniel Hemric will again wheel the No. 8 JR Motorsports Chevrolet. He won the pole for the NASCAR Cup Series second race at Kansas last year.

David Starr will drive the No. 07 SS-Green Light Racing Chevrolet. It will be his 10th start this season.

The No. 90 DGM Racing Chevrolet also does not yet have a listed driver.

The Kansas Lottery 300 will take place on Saturday, Oct. 17 at 7 p.m. ET with TV coverage provided by NBC Sports Network.

Mark joined Frontstretch at the beginning of the 2019 NASCAR season. He is an Eagle Scout & a proud University of Dayton alum. He also writes about NASCAR for Beyond the Flag.
@MarkKristl
Previous Austin Cindric Returning to Xfinity in 2021, Running Cup for Wood Brothers in 2022
Next Entry List: 2020 Clean Harbors 200