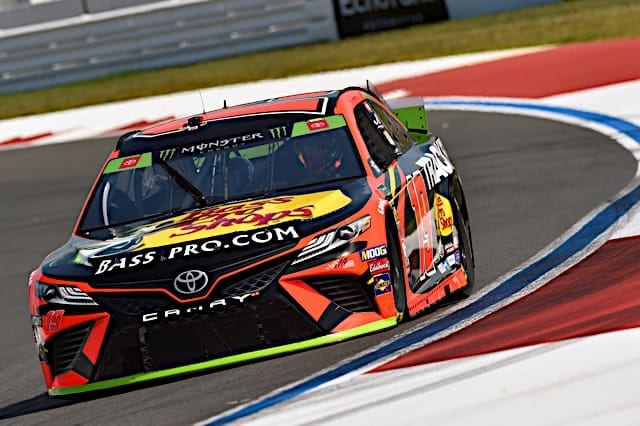 After a wild race at Talladega Superspeedway last weekend, NASCAR Cup Series drivers take on the twists and turns of the Charlotte Motor Speedway ROVAL on Sunday, Oct. 11. Get your NASCAR DraftKings lineups ready for the final race in the postseason Round of 12!

The Bank of America ROVAL 400 is currently scheduled to run 109 laps around the 2.28-mile course. As is the case for all short tracks and road courses, teams will use the higher-horsepower package with a small spoiler.

Sunday marks the third time the series will run on this configuration but Mother Nature might throw a wrench into their plans. Inclement weather, including rain and thunderstorms, is in the forecast for that afternoon. If the rain is too heavy, or lightning hits near the track, then the race could be shortened or delayed. Otherwise, teams have rain tires to use if needed, making what’s traditionally been a wild race even more chaotic.

Under normal racing conditions, DraftKings users would often need lap leaders, high-place finishers and position differential drivers in their lineups. However, rain would make for a very slick racing surface, especially on the curbs. Many drivers have raced in wet weather before, but it has been awhile. Create your rosters carefully and search for experienced choices you trust.

Remember, DraftKings awards 0.5 points for each fastest lap and 0.25 points for each lap led. Additionally, the site adds or subtracts a point for each position a driver gains or loses on track. Finally, the driver in first scores the most points (46). Second place gets 42 DraftKings points, third gets 41 and so on. The key in daily fantasy NASCAR DraftKings is not only to target the best drivers but the ones who gain the most positions from where they start.

Before I share my picks, let’s go over the results from last week’s event at Talladega Superspeedway.

Remember that trend I shared last week about Ricky Stenhouse Jr.? Well, unfortunately, the rollercoaster continued… and it wasn’t good for me. I should have placed Denny Hamlin in this lineup instead, as he has finished near the front of the field at Talladega and Daytona International Speedway the past few races. Still, Ty Dillon surged to third after starting 28th, which increased his DraftKings score to 66.5. That was enough to salvage a disappointing day from Stenhouse and Ryan Blaney.

This lineup cashed the $1 single-entry double up and earned $1.50 in the $1 Happy Hour tournament.

After crashing in the TUMS Heartburn Turn on a restart, Elliott rallied back to win last year’s ROVAL race. He started 19th, but made his way through the field and led 35 laps in total. Even more iconic was his burnout celebration.

There’s probably no one hotter on road courses than Elliott, as he’s won the past three such events. Earlier this season, the No. 9 Hendrick Motorsports driver led 34 laps en route to victory on the Daytona road course. Additionally, the Dawsonville, Ga., native dominated the last two races at Watkins Glen International, leading 132 of 180 total laps.

Elliott is a bit of a risky play, though. He’ll start on the front row, next to polesitter Hamlin, and could lose a ton of DraftKings points if he crashes out early. Still, Elliott’s recent history suggests you should still place him in your lineup.

Will he earn a third victory of 2020 on Sunday? Let’s just say lock him into your roster.

In the inaugural Charlotte ROVAL event, Truex was about to win when Jimmie Johnson started spinning in the final chicane and tagged Truex, which sent him into the wall. As a result, Truex ended up 14th while Ryan Blaney passed by for the victory. The No. 19 Joe Gibbs Racing driver rebounded for a seventh-place finish last season but wasn’t as strong a contender.

Truex has done well at other road courses, though. At Daytona’s road course in August, he earned a podium finish after leading 10 laps during the event. Also, Truex was runner-up to Elliott in the past two WGI races; in 2017, he led 24 laps to earn the victory in his championship season. Finally, the Toyota driver has claimed three trophies at Sonoma Raceway, including 2018-2019, on two different configurations of the track.

If Truex can get to the front from his seventh-place starting position, lead some laps and earn a top 10, he should score well on DraftKings. I think that’s a sure bet.

McDowell is definitely known for his road course prowess. In this event last season, he ended 12th, 10 spots higher than where he began, in one of his strongest races of 2019.

This August’s performance at Daytona was even better for the Front Row Motorsports driver. He gained 20 positions to finish 10th, earning 54 DraftKings points as a result. Additionally, the Arizonan has earned top 20s in the past four events at Watkins Glen, with his best finish of 12th coming in 2017.

Since the No. 34 Ford driver starts 31st Sunday, he could earn bonus points for each car he passes on the track.  Add in position differential points and they could really tally a win for your lineup, especially if he earns another top 15.

Bell became quite the road racer in the NASCAR Xfinity Series. He won at Road America and was second at Mid-Ohio Sports Car Course and WGI last season. However, the rookie’s not in well-funded equipment this year, so he probably won’t race for the win. Still, the Oklahoma native has experience at the Charlotte ROVAL and earned a top five in the first NXS event held there.

Unfortunately, Bell didn’t have a good result at the Daytona road course a couple of months ago. He started 15th and ended 21st in the weather-delayed race. On Sunday, though, the Leavine Family Racing Toyota will begin in the back of the pack and could earn several spots if there’s a lot of attrition. If the No. 95 can hang in there, a top-20 finish would make Bell a good addition to your DraftKings lineup.

Buescher has been OK at this course, earning top 20s in both races. He hasn’t been good on DraftKings, though, because he started higher in those events. This trend caused him to lose fantasy points instead of cashing in on solid runs.

However, Buescher’s racing for a different team this year – Roush Fenway Racing, which is better equipped than his previous ride. He also earned top-20 finishes at Sonoma and Watkins Glen, respectively.

In the Go Bowling 235 in Daytona, Buescher wheeled his No. 17 Ford Mustang to fifth place after starting 21st. This boosted his DraftKings score to 55 – really high value for his salary.

Where is he starting this week? That’s right: 21st. Hopefully Buescher gets another top 10 to help you cash your DraftKings contests.

Wallace hasn’t exactly been a road course ringer with Richard Petty Motorsports. So why did I choose him? Well, for one, he’ll line up 26th on Sunday and could get a high DraftKings score if he ends 20th or higher. Two, Wallace was racing for a top 10 or 15 at the DIS road course when he was punted off a turn in the final laps (25th). Lastly, Wallace finished in the top 10 at Road America in NXS from 2015-16 (fifth and ninth).

Like Bell, Wallace could use some attrition during the race to help him earn some spots with the No. 43 Richard Petty Motorsports Chevrolet. Perhaps this time, he won’t be knocked out of line. Finishing 16th or higher would give him a solid score on DraftKings… and I think he’ll get there.