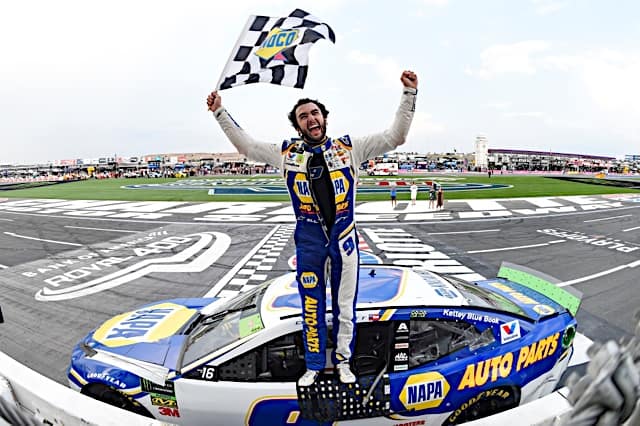 So, here it is. The third season of the Charlotte Motor Speedway ROVAL event in the NASCAR Cup Series.

This track configuration has been the site of so much chaos in its early life, with it being a playoff cutoff race. Two pretty crazy finishes – Ryan Blaney surviving a last corner wreck to win, Chase Elliott winning to advance in dramatic fashion – have defined this race so far.

While I think NASCAR should get rid of the backstretch bump stop so that lap times can be a little faster, that bump stop makes the track a fun-size version of the Daytona International Speedway road course. When making selections, it’s going to be crucial to take a look at that race in August. That event should give you some kind of idea as to if there are going to be any differences between who will be fast at the ROVAL this year and who won’t be.

Also, with only 0.1 points awarded for each lap led by a driver, the need for a dominator is less important when building a winning lineup. The 109-lap race will have a total of 10.9 points up for grabs in this category. Take note when building your roster and focus on midpack competitors who can climb up toward the front on race day.

Here are a few drivers to keep an eye on when setting your daily NASCAR FanDuel roster for the race this Sunday.

There’s really no road course driver in the Cup Series better than Elliott.

That kind of statement puts a lot of pressure on the pride of Dawsonville, Ga., but he’s backed it up constantly. Elliott has won three straight road-course races, beginning last season with Watkins Glen International. With an average finish of 3.5, the ROVAL is the best statistical track for Elliott.

Last season, Elliott entered this race needing a win to advance, and he was able to drive through the field during the last stage to take the win. That’s an impressive enough accomplishment that it’s hard not to have him on the team again this season.

If Elliott is the best road course driver in this series, Truex is second best. While Truex has not had the success Elliott has had at the ROVAL, he’s won a couple of times at another low-speed road course, Sonoma Raceway.

Truex is almost guaranteed big points at a road course, and while both he and Elliott are fairly pricy editions, you can afford to get them as you can save money with picks more suited to this style of racing lower on the lineup.

This event will be potentially Johnson’s last at Charlotte. The venue formerly sponsored by longtime Johnson sponsor Lowe’s was a stronghold for the future NASCAR Hall of Famer throughout his career, winning eight total races there and four in a row at one point in time.

Johnson may not seem like a great pick this weekend outside of sentimental reasons with his one Cup road-course win. But there are a couple of advantages Johnson brings to the table. For starters, Hendrick Motorsports has been excellent on road courses the last few years, with Elliott and teammate Alex Bowman scoring a 1-2 finish in last year’s ROVAL event.

Johnson also isn’t bad there; he almost won in 2018, but a daring last-chicane pass attempt on the leader failed and he finished eighth. Johnson followed that up with a ninth last season. So this isn’t a terrible pick whatsoever this weekend.

Buescher is an oddball pick on the surface, but look under it.

He has been sneaky consistent this season, with a career high eight top-10 finishes. He has an Xfinity Series road-course win to his name, a Mid-Ohio Sports Car Course triumph in 2014. And one of his two top-five finishes this season was a very solid fifth at the Daytona road course, suggesting that the Texan may surprise a few people on Sunday.

This is the ultimate Moneyball pick. Davison has been the worst driver on the worst team this season, which is expected due to his lack of stock car racing experience.

This pick is based off one word: rain. There are thunderstorms in the forecast on Sunday, and rain in the forecast on Monday in the event of a postponed race. Davison is one of the only drivers in the entire field with any substantial experience in the wet. The lack of grip that rain creates makes driving a stock car in it very hard, as most drivers just aren’t used to that lack of grip.

That could leave an opening for Davison not to win but to maybe steal a top 15, which would be huge for a driver at this salary.