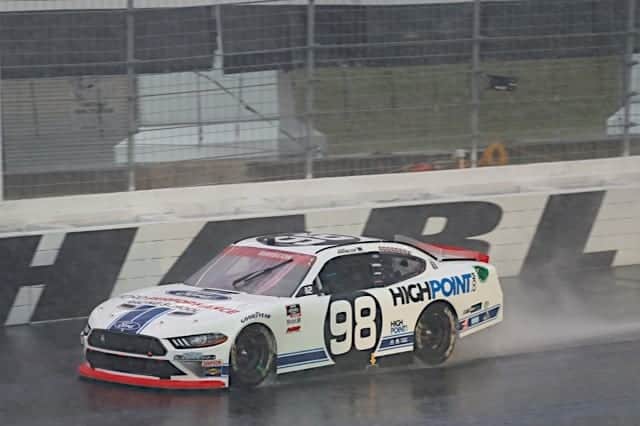 Amid the monsoon-like conditions that drenched Charlotte Motor Speedway’s ROVAL on Saturday (Oct. 10) in the NASCAR Xfinity Series, Chase Briscoe seemed destined for a strong finish after leading laps and winning the second stage.

That was until the final restart, where the winner of the inaugural ROVAL event spun in the middle of the first turn and ended up 18th.

Briscoe lined up for the final restart as the leader alongside eventual winner AJ Allmendinger, with whom he had battled for much of the latter stages of the race. Briscoe and Allmendinger won the 2018 and 2019 editions of the race, respectively, and the No. 98 had passed Allmendinger for the lead just before the final caution flag waved.

“The driver just made a mistake,” Briscoe said in a post-race interview. “In conditions like this, you gotta be at 100% – I tried going 110% and it just bit me – very unfortunate, that one’s gonna sting for a long time. I felt like I did my job for about 95% of the day right … I tried throttling up, I was in first gear and I hit the puddle and it spun me out. That’s frustrating to say the least, but we obviously had a good [car], but didn’t get it in victory lane so we’ll try to do it next week.

“It’s encouraging to run with AJ,” he added. “But the end result is he won the race and I ran [18th] so I’m gonna think about that one a lot tonight laying in bed. I know what I did wrong, that’s the frustrating part, and just try to learn from it and move on.”

Briscoe dodged the bullet that brought out the final caution, too. CJ McLaughlin‘s No. 99 had spun in the first turn and nearly backed into Kody Vanderwal, then attempted to turn in the right direction right when Briscoe went by. Briscoe twitched the wheel a bit to slide by, nearly grazing the wall in the process.

Right in front of the leaders! A late-race restart is coming up on CNBC! #NASCARPlayoffs pic.twitter.com/QixBoSqomm

Once the rain set in early on, drenching the track and essentially making the entire circuit one big puddle, the No. 98 came alive. Briscoe led 23 laps, the most of any driver, and won the second stage after the race restarted from red-flag conditions. He stayed out front after the stage concluded and then proceeded to alternate the lead with Allmendinger for the rest of the race; neither led more than five laps before the other took advantage.

What a move!@ChaseBriscoe5 passes the road course racing expert AJ Allmendinger for the lead in the rain at the @CLTMotorSpdwy ROVAL! #NASCARPlayoffs

Briscoe bumped Allmendinger for the lead in the waning laps before spinning on the final restart, allowing Allmendinger to take control for the final time and win the race.

It was nearly a mirror image of their battle at the Indianapolis Motor Speedway road course in July, where Briscoe came out on top.

“… I tried going 110% on that last restart,” Briscoe tweeted after the race. “Lesson learned, this one’s gonna sting for a while.”

It takes being 100% to win these races and I tried going 110% that last restart. Lesson learned, this ones gonna sting for a while. Thanks @AJDinger for coming and racing with us and congrats on the win, you make us all better road racers.

Briscoe is still the highest-seeded driver with the playoff field cut down to eight and travels with the rest of the field to Kansas Speedway next weekend. The Kansas Lottery 300 is set for Saturday, Oct. 17 at 7 p.m. ET. Coverage will be on NBC Sports Network.