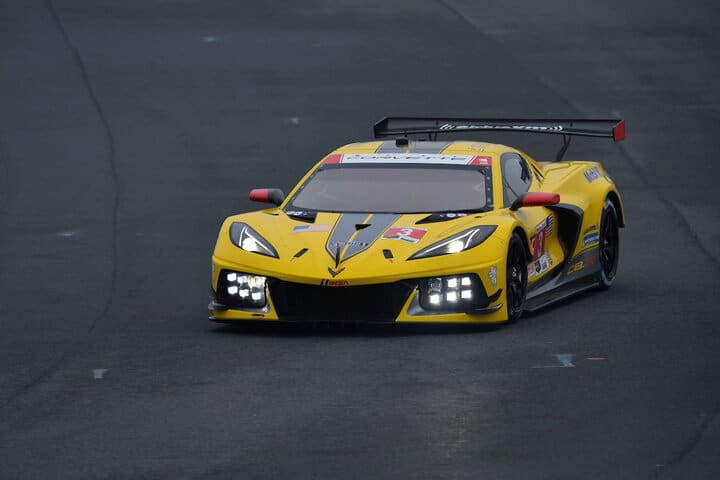 In a rather rough qualifying session Saturday (Oct. 10) at Charlotte Motor Speedway’s ROVAL, Corvette Racing’s Jordan Taylor won the pole for the Motul 100% Synthetic Grand Prix with a lap at 112.442 mph.  It is Taylor’s third pole of 2020.

Since the IMSA WeatherTech SportsCar Championship is running the exact same configuration that the NASCAR Cup and Xfinity series teams will compete on, there is a direct lap time comparison to be made.  Compared to qualifying last year, Taylor’s pole lap is 6.654 seconds faster than the pole lap set by William Byron for the Cup race and 8.954 seconds faster than Chase Briscoe‘s Xfinity pole lap.

Porsche GT Team’s Laurens Vanthoor clipped the curb in turn 7 and threw himself into the unprotected concrete wall.  That broke the right rear suspension of Vanthoor’s Porsche 911 RSR-19 and sheared the right wing endplate off the car.  Vanthoor ended up stopping on-track to bring out the red flag.  By virtue of that, he lost his best two laps and will start at the rear of the class.

Just because red flags weren’t brought out didn’t mean that everyone else got out of the session scot free.  Krohn hit the wall exiting the TUMS Heartburn Turn and lost his right side mirror on his final lap at speed.

The GT Daytona portion of qualifying was rather rough and tumble, a potential harbinger of things to come in the race.  Toward the end of the session, Compass Racing’s Jeff Kingsley had contact with Hardpoint Motorsports’ Rob Ferriol in the frontstretch chicane, spinning out the Audi R8 LMS GT3.  Ferriol continued without incident.

AVS Vasser Sullivan’s Aaron Telitz ended up winning the pole with a lap at 107.140 mph, his third of 2020.  However, even Telitz didn’t come out of the session clean.  On his final lap, he hit the SAFER barrier exiting the final chicane, scuffing up his Lexus in the process.

Telitz’s lap was one-eighth of a second faster than Turner Motorsport’s Robby Foley in the sole BMW.  Meyer Shank Racing with Curb-Agajanian’s Matt McMurry will start third in class, followed by Kingsley.  Wright Motorsports’ Ryan Hardwick will start fifth in his Porsche.

There was a red flag halfway through the GT Daytona session after Heinricher Racing with MSR Curb-Agajanian’s Misha Goikhberg clipped the wall exiting the aforementioned turn 7 and spun.  Goikhberg could not recover his Acura NSX GT3 Evo in time to avoid the red flag.  The car had right rear damage as a result of the contact.  Like Vanthoor, Goikhberg lost his best two laps for bringing out the red flag and will start at the rear of the field.

In addition, Hardwick failed to come into the pits during the red flag.  This resulted in a five-minute stop-and-hold penalty that ended his session early.  However, he did not lose any of his lap times.

The Motul 100% Synthetic Grand Prix is scheduled to go green just after 8 p.m. ET.  The race will air live on NBCSN.