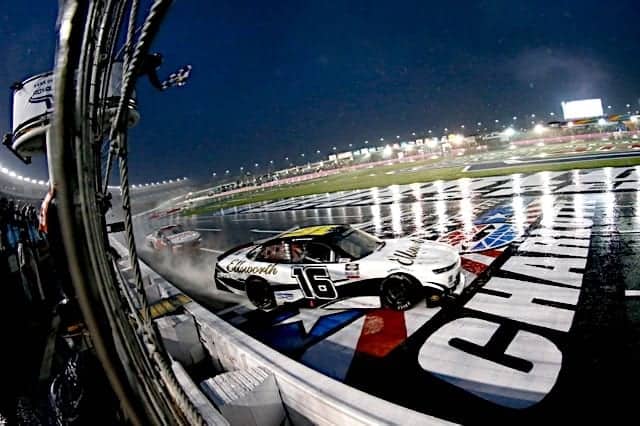 The old saying goes, “When it rains, it pours.”

In Saturday’s Drive for the Cure 250 in the NASCAR Xfinity Series at Charlotte Motor Speedway’s ROVAL, that expression was implemented quite literally.

With plenty of cars slipping and sliding around on the wet and rainy pavement, hardly anybody was safe from trouble. But the one driver who masterfully escaped it all was AJ Allmendinger.

Allmendinger started way back in 22nd. But considering his road-course record, it wasn’t be too long before he made his way into the conversation.

The climax of his race was his intense battle with Chase Briscoe; the two drivers combined to lead 39 laps. But on the final restart, Briscoe’s No. 98 snapped loose coming out of turn 1, spinning into the inside wall and evaporating his chance at victory.

That allowed Allmendinger to sail away in his No. 16, holding off Noah Gragson and hometown driver Daniel Hemric at the line to collect his fifth career win and his second victory of 2020.

Alex Labbe and Ross Chastain rounded out the top five.

In the meantime, the fight was on to advance into the next round of the playoffs, which begins next weekend at Kansas Speedway. Throughout the day, several drivers were on the cusp of both making it in and missing out. In the end, it was Brandon Brown, Harrison Burton, Michael Annett and Riley Herbst who failed to advance their way into the next round.

With Allmendinger’s win, the victory total for Kaulig Racing is up to five in 2020.

Even when Allmendinger wasn’t able to get the job done on the other road courses this year, he was in the mix for every one of them.

Whatever Allmendinger’s racing plans for 2020 may be, his two wins this year should be taken as a loud cry for him to return again and keep his winning ways alive.

Gragson almost had his race get away from him on two different occasions. He spun out on his own in the infield right as the rain came during stage 1. Then, during the next stage, he got bumped by Herbst going through turn 3, nosing into the barrier and spending a significant amount of time in the pits for repairs.

But Gragson remained determined. He moved up into second as Briscoe spun out on the final restart. He came within five car lengths of race winner Allmendinger, making a remarkable recovery. Could this be a sign of what Gragson can do when his back is against the wall?

It’s a tale of frustration for the four drivers that missed advancing into the next playoff round. But you have to feel for Burton the most.

Burton fell back in the field due to overshooting the frontstretch chicane twice but recovered to restart in the top 10 by lap 37. As he went up through the gears, however, the transmission broke on his No. 20.

No longer having the power to continue on, he was pushed back to the garage, settling for a dismal 33rd-place finish, an unfortunate belated birthday present for the 20-year-old Burton, as the two-time winner this season will have to miss out and watch teammate Brandon Jones carry the torch for Joe Gibbs Racing for the remainder of the playoffs.

The featured star of this section is obvious. When the rain came, all hell broke out; cars spun and crashed into the barriers almost everywhere you looked. A red flag had to be thrown at lap 30 due to worsening conditions.

But the chaos didn’t stop there. A record-setting 10 yellow flags were thrown in Saturday’s event, with many ventures off track and spins that did not result in a yellow flag, let alone those that did.

Although the finish was exciting, and the race was able to go the full distance, it raises the question of how well the NASCAR Cup Series drivers will be able to fare in rainy conditions on Sunday, should they choose to even do so.

It was a rise-and-fall kind of day for many underdog competitors. But the driver who executed best on the day was DGM Racing driver Labbe.

Labbe kept his No. 36 in the upper half of the field nearly all race long. At one point, he passed Chastain for second but spun out in the following turn. But he stayed patient and worked his way up the field with every green-flag stint.

At the checkered flag, Labbe crossed the line in fourth, his first-ever top five in the Xfinity Series – a superb effort by the Canadian driver.

Two drivers also collected their ever top-10 finishes in Xfinity competition. In his first Xfinity start of 2020, Cody Ware came up from dead last on the starting grid to score a seventh-place finish in his family-owned No. 17. Jade Buford, in his fourth start, scored an eighth-place finish in the No. 07 for SS-Green Light Racing.

“The 98 of Briscoe did a fantastic job. I didn’t have anything for him after a couple laps. But on that final restart, I was gonna do everything I could.” – AJ Allmendinger

Now that the series is done with road courses this year, it’s time to bring the focus back onto the ovals.

Eight drivers are left to compete for four championship-eligible spots in the season finale at Phoenix Raceway. Jones has won the last two races at Kansas. Austin Cindric has three wins on 1.5-mile tracks this season. Briscoe has eight wins. Ryan Sieg, with his family-owned RSS Racing team, looks to shock them all and make it into the championship round. And that’s just the tip of the iceberg.

These next three races will be the most critical ones of the entire season. Buckle up folks, because it’s going to be one heart-stopping round.

The Xfinity Series will begin the next round of the playoffs by heading out west to Kansas for the running of the Kansas Lottery 300 on Saturday, Oct. 17. Green flag is scheduled for 7 p.m. ET, and the event will be televised by NBC Sports Network.

Good to see it’s going to rain. The Cup cars are going to need headlights for their example of Brian’s product on Sunday when darkness falls. I can’t wait to see how many cautions Gase, Nemechek and the rest of the arm- scratching platoon bring out, unless Golden Boy or Baby Busch is leading at the end.