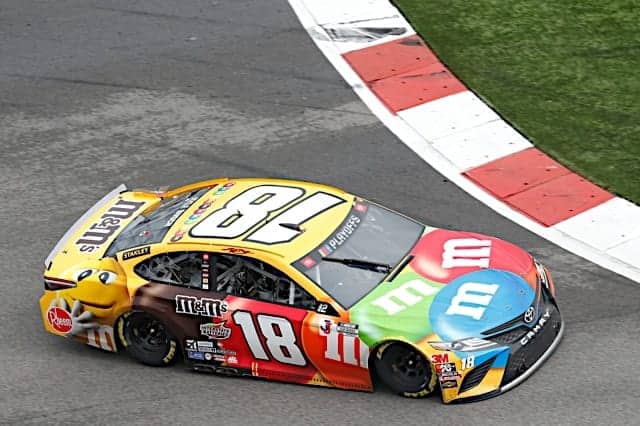 While Sunday (Oct. 11) afternoon’s Bank of America ROVAL 400 at the Charlotte Motor Speedway ROVAL didn’t exactly descend into chaos, four drivers were eliminated when the checkered flag flew and the NASCAR Cup Series playoff field was cut down to eight.

The Round of 12’s victims consisted of Kyle Busch, Clint Bowyer, Austin Dillon and Aric Almirola, all of whom had struggles throughout the day; Bowyer was the highest-finishing driver of the four in 10th.

Kurt Busch, Denny Hamlin and Sunday winner Chase Elliott all advanced by virtue of winning the three races during the round. Kevin Harvick, Brad Keselowski, Martin Truex Jr., Joey Logano and Alex Bowman all advanced on points, with Bowman and Logano squeaking their way into the Round of 8 just above the cutline.

The Round of 8 for the @NASCAR Cup Series is set!

Kyle Busch, Clint Bowyer, Austin Dillon, and Aric Almirola have been eliminated from the #NASCARPlayoffs. pic.twitter.com/7QPTGvZ98g

The threat of rain hung over much of the race, with dark, cloudy skies threatening overhead, but unlike the previous day’s Xfinity Series race did not have a deluge turning the track into a puddle. However, the cars did start off the event on rain tires, though, the first time since 1956 that a race had done so.

Kyle Busch was arguably the most surprising elimination after the race. The defending series champion still has not won a race in 2020 but was riding the cutline heading into Charlotte.

“It’s just been the year,” Busch said afterward. “Nothing’s played out and has been on our side, it’s just been unfortunate circumstances [and] lots of bad luck, but these guys on this M&M’s team never give up and they fight all year long, every race and every lap, every pit stop. It’s just… one of [those] off years, a terrible year for me, but as other sports greats would say, there’s many other drivers that would love to have the year that we’re having.

“Man, it’s just frustrating to know how good we are and what we’re capable of,” Busch added. “Being champions from last year, to not come out here and be able to succeed and be able to win, the fact of the matter [is] we win and we’d be a hell of a lot better off. I knew this round was going to be trouble with the year that we had.”

Busch was also asked if his car would have been able to contend for a win had he pitted late in the race.

“No,” he said. “We probably would’ve been third or fourth, somewhere in there. The [No.] 9 was stout [and] stellar, they got the best car here. We got a lot closer this year than we were last year for as far off as we were [in 2019]. I felt like this was a decent run, a better run for us, but we still got a lot of work to do to try to get better. I’m not sure what it is, but man, we lacked a lot of drive-off the corners.”

Busch finished 30th after pitting in the waning laps, also leading three laps over the course of the afternoon.

Austin Dillon also suffered elimination but recorded a career-best 19th-place result at the ROVAL after failing to finish inside the top 20 in either of the previous two races.

“Yeah, we were looking pretty good at the end of stage 1,” Dillon said in his post-race interview. “We took tires again and got to fifth in the stage, and that unlucky caution happened in that cycle and we knew we were kind of dead meat at that point because we didn’t have dry [tires] on. So we pitted at the end of stage 1, just trying to jump some people, and we had to go to the tail because pit road wasn’t open, just a lot of stuff.

“Then that caution fell late in stage 2 when we were running 12th, just no help from cautions; the race just didn’t play our way. I’m actually pretty happy with that as far as my road course racing has been. I raced hard all day, we finished 19th, and that shows some progress, I think. If we would’ve been up there, track position-wise, we would’ve maintained just fine.”

Meanwhile, Clint Bowyer drove the last 45 laps without power steering and finished 10th. After the race, he sat against his car and had water poured over his head, later being taken to the infield medical center. According to the NBC broadcast, he was treated and released.

Bowyer led nine laps during the race, having announced his move to the FOX booth at the end of the season earlier in the week.

“It was tough,” he said afterward. “I struggle here in particular; I’m not the greatest road course racer, but specifically here has always been a challenge for me. [We] just struggled all day, really struggled on the rain tires and I spun out over there in that water that was draining across the racetrack in turn 4… had an issue with a pit gun or something on pit road and got a lap down, and we fought hard. It was definitely a fight, but just not the day we needed to move on. We still got a few races left to go perform at the highest level, we can and try and get the most points we can, so still really proud of our season and proud of the effort of this team. We’ve got some racing left to do and hopefully get this Smithfield Ford Mustang in victory lane in one of these last few [races].”

The Round of 8 begins next week at Kansas Speedway, with the Hollywood Casino 400 scheduled for Sunday, Oct. 18 at 2:30 p.m. Hamlin is the defending winner of the race.

Tears of the Scrub. Denied!!

I’m not a fan of the Roval, especially during the playoffs. Still, if they were planning to run the race on the oval, they probably wouldn’t have gotten the full distance in. I’ve spent quite a few soggy October weekends in turn 2 at CMS, waiting on the rain to stop, then waiting on track drying to get done and hoping the rain is finished. That’s no fun.

Glad Busch didn’t make it. I hope he doesn’t win one of the next 4 races to break that streak. A dose of humility will do him good and breaking those streaks will ensure we never have to hear about either of those streaks ending again.

Funny how besides Kyle himself having an off season, the guy most directly responsible for him not squeaking into the next round by points was his brother winning at Vegas. Some sort of “Conservation of Busch Property”…. Busch’s cannot be added or subtracted from the playoffs, only converted from one Busch to the other.