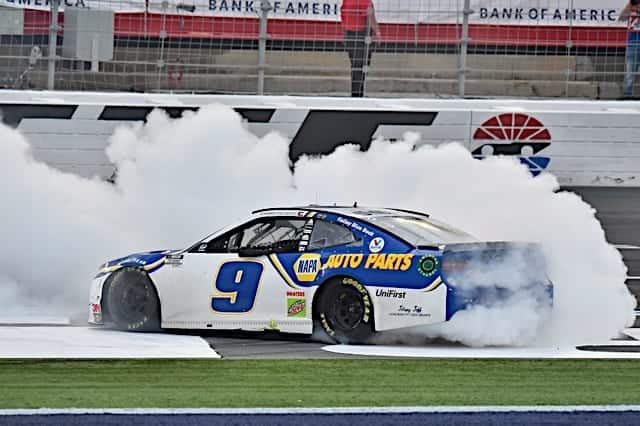 Torrential rainstorms stayed away from Sunday’s (Oct. 11) Bank of America ROVAL 400 at the Charlotte Motor Speedway ROVAL. The storm that is Chase Elliott’s road-course dominance, however, did not.

Elliott tied Jeff Gordon with his fourth road-course victory in a row, taking the lead on lap 92 of the 109-lap race to go on to win.

Elliott, who also won this year on the Daytona International Speedway road course, also won last year at Watkins Glen International and at the ROVAL.

Finishing behind Elliott to round out the top five were Joey Logano, Erik Jones, Kurt Busch and Ryan Blaney.

William Byron was sixth, ahead of Martin Truex Jr., Alex Bowman, Cole Custer and Clint Bowyer to round out the top 10.

“Road courses have been fortunate to us. We just try to get a little better each time,” Elliott said after the race. “It’s always special to win here at Charlotte with the shop being across the street. The best way to get to the next round is to win. Hopefully we can do something with it.”

The race saw the caution flag wave seven times for on-track incidents, with the lead shared by 12 different drivers.

Elliott etched a sizeable lead after his pass with 18 to go via a crossover move to get by Jones, including withstanding a restart following a caution with 12 laps to go. The best chance that the rest of the field had to pass Elliott was a caution flag, and a decision by Elliott’s crew chief Alan Gustafson to stay out and not pit during that caution ensure that track position was retained by the No. 9 car.

Leading after the restart, Elliott pulled away, and when the caution failed to fly for three separate spins inside the final two laps, it ensured Elliott’s latest victory.

The win earned Elliott a spot in the Round of 8 in the NASCAR playoffs, while two other drivers who contended earlier and needed a win to advance, Bowyer and Kyle Busch, fell short. Busch rallied after a flat tire in the second stage, leading with three laps to go. But with 18 laps to go, Elliott and Bowman got by for the lead, and Busch did not challenge for the lead again, finishing 30th.

With the setback, Busch becomes the first defending series champion to not advance past the Round of 12.

Bowyer raced his way into the top five early on and became a factor, leading twice for nine laps. Hopes of a win came undone with less than 40 to go when multiple cars stacked up on a restart, resulting in front-end damage for Bowyer, who ended up 10th.

I’m good. Was definitely outta gas!! Another couple three laps and I’d have been on the ground after race crappie floppin’

Self inflicted, I shouldn’t have knocked the Power Steering out.

Along with Busch and Bowyer, other drivers failing to advance to the Round of 8 were Austin Dillon and Aric Almirola.

Heartbreaking about Baby Busch. Absolutely heartbreaking. I cried over it….Tears of absolute joy! But it was touch and go when he was leading, wondering what NA$CAR would cook up.

With 20 laps left, a car that hadn’t lead a lap all day, and the rest of the field having fresh tires, I was pretty sure he was gonna get eaten up on the restart. In the end he needed fuel anyway so it was a bluff anyway, a definite Hail Mary.

He’s run away and hid on used tires before, but he didn’t get any help from NA$CAR this time. J-Jo did the same thing on old tires, once upon a time.

i was surprised in ky busch’s post race interview wasn’t filled with words that would have had the bleeper going strong. needless to say i was smiling that the 18 didn’t make the next round. be interesting to see if the 11 self-destructs next.

I agree with you Janice. That was the only interview I wanted to see after the race. I have to admit that I didn’t expect to see him give a bleep filled interview. He had already accepted the idea that he wasn’t going to make the next round, he’s had a terrible year by his standards and I think he was glad to be done pretending he was a contender this year. Nice to see that he has grown up and no longer acts like a child. As I said in another comment, a dose of humility is always a good think for someone with a personality like him. I am sure he will rebound well next year.