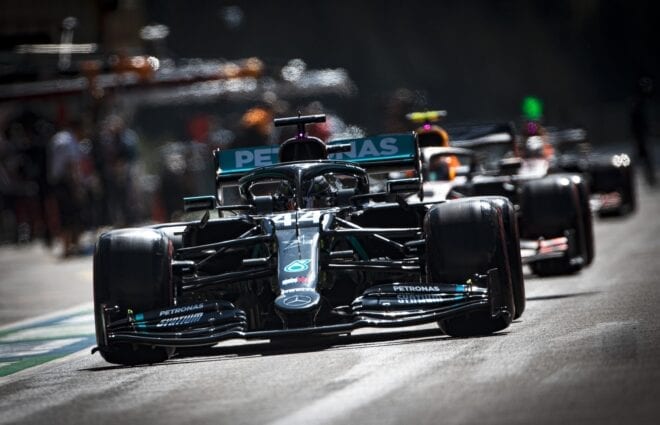 If you were not one of the 114 million people that tuned in to the BTS performance late Saturday night/sometime Sunday, you may have been one of the regular 91 million people that watch Formula 1 and saw Lewis Hamilton earn the 91st win of his career – tying Michael Schumacher for first in all-time career F1 wins.

Hamilton benefited from the struggles of his teammate Valtteri Bottas, who locked up his front wheels in the early stage of the race, allowing Hamilton to pass easily, then cruised from that point forward.  The eventual power unit failure that Bottas encountered is really a blip compared to Hamilton’s success.

Even though Hamilton started second and then looked like he might have to wait until the next race to equal the historical mark, the race came to him, almost as if the conditions willed him to the win, a fitting one, coming in Schumacher’s home country.

Perhaps it is fitting that a K-pop boy band is the most popular group in the world at a moment when a Black British driver ascends to the top of the wins list, and; with little doubt taking over sole possession of first in the very near future.

The trends of a flattening world show how lines become blurred and how culture and identity move across what once were stable borders.  At a time when America celebrated the passing of Eddie Van Halen, a virtuoso guitar hero born from Indonesian and Dutch mixed-race heritage, the positioning of Hamilton atop the wins total serves as recognition to the continued success that eludes race and gender.

Hamilton has ripped off wins at a rate that none of his heroes or contemporaries have, blistering through the record books and leaving a scorched path that is unlikely ever to be followed.  His 91 wins in 261 races bests Schumacher’s 91 in 308 by over five percentage points (34.8 to 29.5).

His record-setting performances come with fortune, as does the success of many of the great modern athletes.  He made moves to the right teams at the right times and has found a home at Mercedes where he has rarely been challenged by his teammates.

He may have driven the best cars at the when it mattered and that makes his accomplishments look easy but an athlete still has to perform, and he has done so, finding a feeling of comfort under pressure that most never do.

His 91 wins are a stopping point, a moment of reflection, that allows us to celebrate Schumacher and to realize his greatness, but Hamilton is by no means done.  His trajectory is one that looks to push the records beyond their current reach, pushing the numbers past what is understood or expected, installing his greatness as a name among the greats.

Bottas suffered through a slow start and watched as Hamilton edged him out of the lead going into turn one, only to recover and regain the top spot by turn three.  By then, the race had already stabilized into a normal procession with Hamilton in second and Max Verstappen in third.

Charles Leclerc held on to fourth but his prospects of holding the position looked bleak from the get-go.  Daniel Ricciardo sat right on his wing and challenged him early before finally dispatching him.

From there forward, the midfield staged their contests of both on-track and strategic moments, swapping positions four through 11 with regularity.

When Bottas locked up his front tyres and gifted the top spot to Hamilton, the main story of the race felt like a done deal.  Bottas looked like he might recover but any such idea was thwarted when he suffered a power unit failure that ended his day.

Hamilton never faced any compelling challenge and bested Verstappen by over ten seconds, driving the latter third of the race as if it were an exercise rather than a competition.

Verstappen slotted into his usual spot of somewhere behind Mercedes on the podium, and Ricciardo sipped the champagne by finishing third for the first time since mid-2018.

Sergio Perez drove a steady race and slid his way into the fourth spot while Carlos Sainz picked his way through the midfield to earn fifth.

Pierre Gasly, who suffered a broken front wing from Alex Albon’s hasty driving and looked to finish at the back of the field rebounded and scored sixth, while Ferrari can find some sort of happiness in Leclerc taking seventh.

Nico Hulkenberg earned the Driver of the Day award for starting last and finishing eighth after not even being an entry in the GP, while Romain Grosjean scored points for Haas F1 for the first time this year.

Antonio Giovinazzi finished out the surprising scoring by taking the last points with his tenth-place finish for Alfa Romeo.

– He sat drinking coffee with his friend, ready to provide commentary for the Eifel GP until his phone rang.  About an hour later, Nico Hulkenberg walked into the garage and was swept up in the whirlwind of the paddock.  Without any practice, Hulkenberg qualified the Racing Point ride he had been summoned to drive in last place for the Eifel GP.

With little time to prepare or get acclimated again, Hulkenberg and his crew pulled out an impressive eighth-place finish.  With Raikkonen likely on the way out at Alfa Romeo, Hulkenberg has emerged as a top candidate to fill the seat – though any enthusiasm for such a move must be tempered by the availability of Sergio Perez, who has still yet to find a home for next year.

– Power unit problems earn part of the story of the day.  First, Bottas found himself in the garage because of power issues not long after he had pitted for fresh tyres in the first third of the race.  Then Albon joined him with a similar issue.  Norris joined the party in the paddock with his retirement on lap 45, parking his steaming McLaren on the side of the track.  The Renault of Esteban Ocon succumbed to a hydraulic issue that took him out of the race.

The car failures are not all that surprising considering the conditions of the race as the temperatures were well below the usual ones associated with F1 racing.

– Alex Albon gets the nod for the most confusing race of the day.  Perhaps because Gasly’s win has made his drive for Red Bull look foolish after being promoted from Toro Rosso (now AlpahTauri).  He has faced criticism for his disappointing performance.  He has been chastised by his questionable maneuvers.  He has failed to produce the expected results.  But really, he has not been that bad – he just has not been that good.

His side swipe of Gasly when the two raced during the middle stage of the race highlighted the problems that many have seen with Albon.  He clipped Gasly’s win clean off, incurred a five-second penalty, and not long after retired due to power unit issues.  But as the Sky Sports announcers intimated, it felt more that Red Bull parked Albon rather than he faced real troubles with his car.  His future with the team becomes more questionable.

Daniel Ricciardo may have finally reached the podium after a draught that has lasted over two years but he forgot to celebrate with his shoo-ey, drinking the champagne from his shoe.  Regardless, he offered said that “It honestly feels like the first podium. I’ll say it all over again. These emotions. There’s like that feeling when you get out of the car and go and hug the team, getting slapped on the helmet, getting a nice headache, it’s a bit of a shock happiness but we know we did it.

I think as well, it’s the first one with Renault, so the first podium with a new crew but, as you touched on, it’s been two-and-a-half years since I was in one of these post-race press conferences, so it’s been a while. It’s a feeling I’ve missed.”

Pierre Gasly describing his collision with Alex Albon said, ““What was he doing? I think it was quite unprofessional of him and poor judgement, so you wouldn’t expect that from a driver of his level, who’s been racing so long.

“But anyway, the race was pretty much ruined from then on. I had to do the whole lap very slow with the damaged front wing as a consequence. It went under my floor, damaged my whole floor, the brake cooling, and the race from there was really a struggle because the car was massively down on downforce, and I was just really hoping for rain or something really strange to happen.”

As an editor, Ava works through some of the site’s biggest columns while writing one of her own on F1 each week. “Stranded” on the island of Oahu in Hawaii, the aspiring college professor also helps anchor other coverage while coordinating Pace Laps, our multi-series news update.
Previous The Big 6: Questions Answered After the 2020 Bank of America ROVAL 400
Next NASCAR Stat Sheet: How Kyle Busch’s Championship Defense Went Kaboom 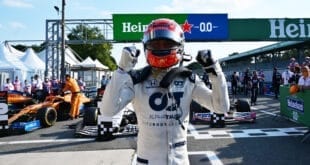 Pierre Gasly Staying With AlphaTauri in 2021