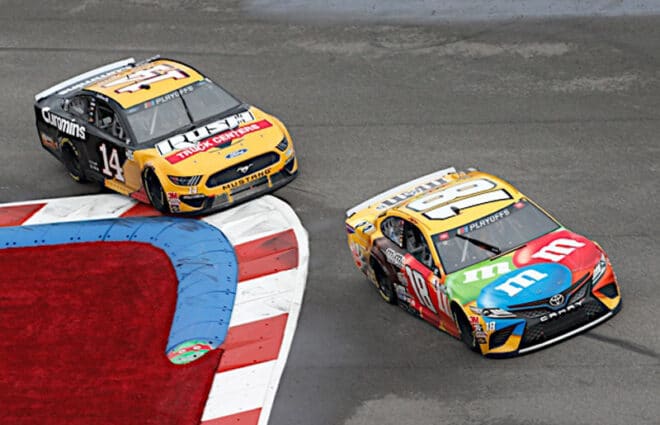 The Big 6: Questions Answered After the 2020 Bank of America ROVAL 400

It’s back-to-back wins at the Charlotte Motor Speedway ROVAL for Hendrick Motorsports driver Chase Elliott. He led three times for a total of 27 laps and has become the NASCAR Cup Series’ top road racer in the last couple of years. It wasn’t all a walk in the park, though. Elliott had to make an unscheduled pit stop for a loose wheel early on, but he had enough time to recover. The No. 9 team used solid pit strategy and Elliott’s road racing skills to take over the lead from Erik Jones with 18 laps to go. From there, Elliott survived the final restart to take the checkers and the free ride into the next round of the playoffs that kicks off next week at Kansas Speedway.

Speaking of Jones, he’s racing for a job next year, and his third-place performance on Sunday certainly helps him make a case for himself. Road courses aren’t the first tracks that come to mind to showcase his talent, but he’s a very strong road racer. That, coupled with his strength on the big intermediates like Pocono and Darlington and unique tracks like Bristol, gives Jones a complete package to market to teams. He could easily go the route of Joey Logano: brought into the top series very young and not given all the tools he needed at Joe Gibbs Racing to succeed but given a second chance elsewhere could mean there’s much more to come.

Four drivers exited the playoffs Sunday, but two, in particular, went down fighting, and that’s all fans can ask for. Clint Bowyer and Kyle Busch had their backs to the wall, but both fought tooth and nail to win the race Sunday.  That’s not to say that Aric Almirola and Austin Dillon didn’t give it everything they had. They simply didn’t have enough speed to make anything happen while Busch and Bowyer made runs for the win.

And the more drivers fight for their proverbial lives every week, the better NASCAR is for it. On Sunday, there were a lot of drivers battling for a lot of things, and none of them backed off. Bowyer was so exhausted from the race he had to go to the infield care center afterward.

That’s a driver who wanted the win, not one who settled for the tenth-place finish he ended up with. Busch took a fuel gamble that didn’t pay off, but he gambled nonetheless.

In the end, they were rightfully eliminated, but their determination not to be made the race that much better.

Last week’s winner Denny Hamlin led the field to green, but it wasn’t long before he gave it up, and from there, his day didn’t get better. He struggled with the handling on the No. 11 and came home 15th.  Hamlin’s safely in the Round of 8 already, so the finish didn’t hurt anything except maybe his momentum, and that’s questionable since the series is heading to tracks where he should rebound just fine.

Stage winders Ty Dillon and Ryan Blaney found trouble in the final stage as both slid off the track in the infield portion. Dillon was one of the first drivers to test the waters (literally) on slick tires, but the move didn’t pay off; after winning the first segment, Dillon finished 23rd. Blaney’s trouble was compounded by a speeding penalty when he pitted after his spin, but he was able to rebound; the No. 12 bounced back for a solid fifth-place finish.

2020 win leader Kevin Harvick is a respectable road racer, and he had a respectable if not brilliant day. He didn’t score any stage points, but he didn’t have to worry as he already had a spot in the next round of the playoffs. Like Hamlin, it was more about having a solid run to position his team for the next three races, which he did with his 11th-place result.

Mother Nature was kinder to the Cup drivers (and the fans) than she was on Saturday to the Xfinity Series.  While the race started under wet conditions, causing the cars to need rain tires for the first time since 1956, the rains held off during the race.

Saturday’s race may have been entertaining while drivers fought to keep their cars straight in wet conditions, but Sunday’s event was the better race because the drivers could race each other instead of merely trying to hang on as was the case all too often on Saturday.

The Xfinity race was a novelty, most definitely, but was it a great race? Not so much. Wrecks, spins and slides are memorable, but not for the right reasons. Sunday’s race was a better balance between racing the track and racing other drivers.

JOHNSTON: FULL BREAKDOWN OF THE XFINITY SERIES RACE AT THE ROVAL

After two playoff rounds that featured mostly unique tracks and the unpredictability that went with it, things settle down, at least for the next two weeks, when the Cup Series pays visits to Kansas and Texas Motor Speedway, a pair of 1.5-mile tracks. The final cutoff race will come at Martinsville Speedway, but drivers should expect a reprieve from the total mayhem the last two weeks put them through before they hit the paperclip.

It could be these next two races that weed out the championship field, though. Mile-and-a-half tracks may not be the most exciting, but they do generally reward consistency, and that’s not a bad thing overall. They’ll likely see the best teams in the field establish themselves, hopefully putting the most deserving drivers at the top of the class before the title race.

How… does the Round of 8 shake out?

The Round of 12 is the one that really sets up the title race; it’s been rare for a driver who squeaked by the first cutoff to make it past the second round without a win, and that rang true this year. The eight remaining drivers all have at least one win in 2020, and six of them have two or more victories.

None of the four drivers eliminated at Charlotte should be a surprise. Kyle Busch is a surprise in the context of his being the defending champion, but in the context of his 2020 season, it’s not. Bowyer, Almirola and Austin Dillon maxed out in this round, so really, the unpredictability of the opening rounds made less of a difference overall than the hype made it sound like they would.

That’s exactly how this needs to work for this title format to have any credibility historically.

In the big picture, not much changes. Hamlin and Harvick remain the drivers to beat, with Brad Keselowski the one most likely to take advantage if one or both falter. It’s possible that one of the pair could miss the final cut if three other playoff drivers win the next three races, but it’s unlikely based on years past and on this year’s performance.