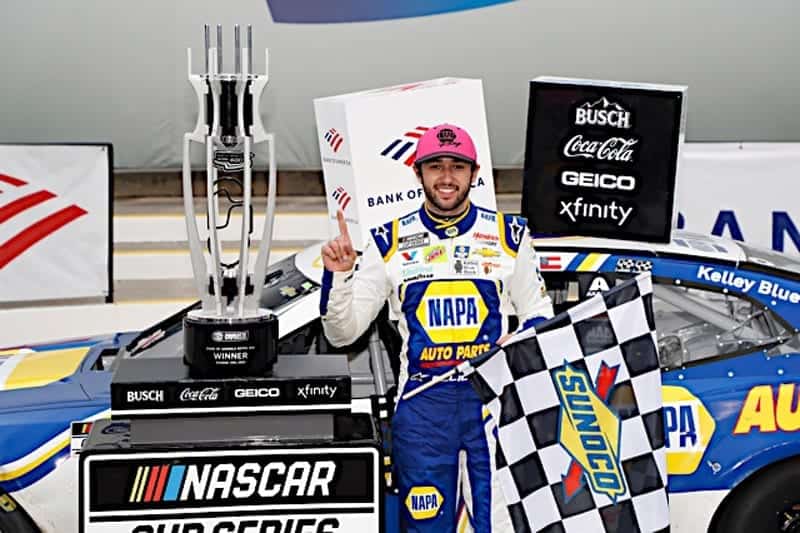 Chase Elliott won the Bank of America ROVAL 400 at Charlotte on Sunday (Oct. 11) for his fourth consecutive road course victory.

After an insane monsoon-like evening for the Xfinity Series race on Saturday, the Cup race didn’t face the same type of weather conditions. The track was wet in the beginning, but rain stayed away throughout the race. Despite it being the first Cup race with rain tires in series history, the racing was fairly tame early on. Brad Keselowski quickly moved from third to first on the initial lap before Elliott got by him and led until the competition caution at lap 10.

The story early was Ty Dillon. He powered through the field on rain tires, then pitted for slicks at the competition caution and got right back to the front. Dillon got all the way by Clint Bowyer for the lead when the caution came out for John Hunter Nemechek, who was stuck in the water-logged grass. That set up a one-lap shootout for the stage win, and Dillon couldn’t be caught. Only one playoff driver (Joey Logano in eighth) earned stage points.

Dillon pit under caution, which put Christopher Bell and William Byron out front. Byron took the lead on the restart for stage two and pulled away with Blaney and Logano as numerous drivers spun on their own throughout the stage. The most notable incident involved Keselowski, Jones, Matt DiBenedetto and this hilarious call by Dale Earnhardt Jr.:

Blaney took the lead from Byron and pulled away before another late-stage caution as JJ Yeley got stuck in the grass. This time it was a two-lap shootout, and it ended with Blaney winning his fourth stage of the season.

Before the end of the stage, Kyle Busch cut a tire and limped around. With his day essentially over, so too were his hopes at repeating as champion.

The defending @NASCAR champion in trouble!

On the restart for stage three, there were again multiple incidents. First, Elliott hit pit road as cars took the green flag with a loose wheel. Then, James Davison, Denny Hamlin and Cole Custer all connected and spun in various directions. Lastly, Ty Dillon was slow and Logano kissed the wall.

Byron remained in the lead through two cautions – one for Ty Dillon and one for Austin Dillon.

Ricky Stenhouse Jr. was sent spinning in turn 1 on the ensuing restart as Blaney pulled away. Then, Blaney took a turn of his own and nearly wrecked the field.

Around from the lead goes @Blaney and WHOA was that close from @mattkenseth! pic.twitter.com/eUX3weGhMI

Ryan Preece took the lead at that point and held off Alex Bowman for a few laps before the No. 88 and No. 9 got by, sending Elliott back to the point. There was another caution with 24 laps to go as Matt Kenseth hit the wall head-on, as all but five drivers pitted to make sure they were good to go on fuel. Kyle Busch stayed out and led for a lap, but he and Jones were no match for Elliott, who used an unbelievable crossover move to regain the lead.

The 9️⃣ with the CROSSOVER. 🔥@chaseelliott is back to the top of the leaderboard at the Roval! pic.twitter.com/jTKABDDFxp

There was a late caution after Brennan Poole stalled, but Elliott retained the lead on the restart without much trouble and pulled away for his third victory of the season. It was the ninth victory of his career and his third straight season with three wins.

As usual, Elliott remains the king on road courses. He had some issues throughout the race and it didn’t really matter. Between a loose wheel, a few untimely cautions and just generally getting stuck in traffic, Sunday didn’t seem like it was his day. In the end, he drove through the entire field for the second straight season to win at the ROVAL.

Looking at the bigger picture, Elliott’s third win of the season couldn’t have come at a better time. He now enters the Round of 8 with all the momentum and five more playoff points. Realistically, this is Elliott’s best chance in his young career to reach the championship race.

A playoff driver won the race, but the non-playoff drivers definitely stood out. Ty Dillon winning the first stage – and his performance in general early on – was fantastic. Timmy Hill even scored a top 10 in the first stage. Bryon, Blaney and Preece all led large portions of the race before fading a bit later on. And in the end, Jones was right there going for the lead as the laps wound down.

Playoff drivers often get all the attention in the final 10 weeks, so it’s important to shine some light on these guys. With only eight playoff drivers remaining, more and more will be focused on those guys. Sunday was a reminder that there are still other great drivers out there competing for victories.

Even though he was already clinched, Kurt Busch was quietly consistent and impressive all afternoon. He entered the playoffs 15th of 16 drivers with one playoff point, and he’s now made it to the Round of 8. Busch is as hot as he’s been all season and should be a dangerous darkhorse threat to steal a spot at Phoenix.

After his win at Las Vegas, Busch said he likely only had one or two more seasons remaining. This is probably his last best shot at a second title. While he’s still the longest or long shots, there’s still hope for the No. 1 team.

I’m shocked at how Kyle Busch’s playoff run went. I’ll admit it: I thought the No. 18 would have a Tony Stewart-like playoff run and come to life. It never happened, and Busch’s shot at a third championship will have to wait another year. All season he was decidedly negative about his chances. I guess we should’ve listened to him.

Now, Busch’s attention turns to one thing: winning. He has won a race in 15 straight seasons and has just four opportunities to extend that streak. It’ll be tough considering he has two teammates still alive fighting for the championship, so I think it might finally be time to give it up.

It didn’t matter because he won last week at Talladega, but Hamlin’s playoff inconsistency continued at the ROVAL. He has two top fives and four finishes outside the top 10 so far in the playoffs. Certainly not championship form, though that can all change in an instant. Hamlin won last season at Kansas and could very easily go win at Texas or Martinsville. Even if he doesn’t win, he has more playoff points than all drivers besides Kevin Harvick.

So, am I worried about Hamlin? Absolutely not. Again, it’s just something to monitor here. If he doesn’t advance to Phoenix, we shouldn’t be completely shocked.

Hendrick Motorsports’ road course prowess is something to note heading into 2021. One could argue that it’s really just Elliott’s prowess, but his teammates are consistently fast at these tracks as well. Elliott and Byron led 27 laps apiece, Bowman was around the front all day and Jimmie Johnson ended up 13th.

Next season, there will be six races on road courses. This will definitely play into Hendrick’s favor and could be an opportunity for Elliott, Byron and Bowman to pad some playoff points in the regular season. Elliott’s four straight road course wins is the longest road course win streak since Jeff Gordon won six straight. With Gordon coaching these young drivers up, they clearly have something figured out.

We’re going to have a diverse championship field – and that’s good for NASCAR. Last year, three Joe Gibbs Racing cars made the finale. This year, no organization has more than two cars in the Round of 8. In total, there are two drivers from JGR, HMS and Team Penske. The other two are from Stewart-Haas and Chip Ganassi. Three Fords, three Chevys and two Toyotas.

Overall, you couldn’t ask for much more parity than that. No organization has dominated quite like Gibbs did last season, which is a welcome sight for the sport.

The rain we saw in the Xfinity race on Saturday was a little too much for my liking. Yeah, Sunday’s race didn’t prove that – I just had to get this point in.

With the cars hydroplaning constantly, it was a complete wild card all day (and night). It was fun at first but quickly evolved into a crapshoot. In a playoff elimination race, it didn’t seem like the best way to run the race. I would like to see a race with moderate rain – the Xfinity race was just too much.

Daniel Suarez had a really good week. First off, he solidified his plans for 2021, as he’ll join the newly formed Trackhouse Racing Team to drive the No. 99 Chevy for Justin Marks. That continued into the weekend, where he debuted a sweet looking Coca-Cola scheme that paid tribute to Hispanic Heritage Month.

Last year, the ROVAL was the final race in Round of 16. There was chaos on the opening lap, constant bumping between Bowman and Bubba Wallace and a dominant performance from Elliott. He drove it straight into turn 1 with 45 to go but recovered to pass the entire field and win without any type of pit strategy.

For the third time in as many years, the ROVAL delivered. The wet track caused some extra unknown early in the race and the action continued throughout. No single driver dominated the day like Elliott did last season, so I would rank this one slightly above the 2019 edition.

For the first time in its three-year history, the ROVAL didn’t have much playoff cutline drama. Austin Dillon and Aric Almirola had issues and struggled most of the afternoon. Clint Bowyer and Kyle Busch had the best shot before ultimately falling short due to problems of their own.

Moving into the Round of 8, the points are re-racked and the season-long contenders are back on top. That means Harvick and Hamlin leading the way.

The Round of 8 for the @NASCAR Cup Series is set!

Kyle Busch, Clint Bowyer, Austin Dillon, and Aric Almirola have been eliminated from the #NASCARPlayoffs. pic.twitter.com/7QPTGvZ98g

The Round of 8 has officially arrived, and with it comes a return to some normalcy. This round doesn’t have any round courses or superspeedways, but it does conclude at Martinsville. Next week, the Cup Series heads to Kansas Speedway for the Hollywood Casino 400 on Sunday (Oct. 18) at 2:30 p.m. EDT. This is the first opportunity for a driver to lock himself into the finale at Phoenix, so the intensity is likely to be as high as it’s been all year.

Logan Reardon, 23, has followed NASCAR since before he could talk. He's taken his passion for the sport and turned it into a budding writing career. Logan also works for NBC Sports as an editor and the Seattle Seahawks as a freelance writer. Follow him on Twitter at @LoganReardon20.