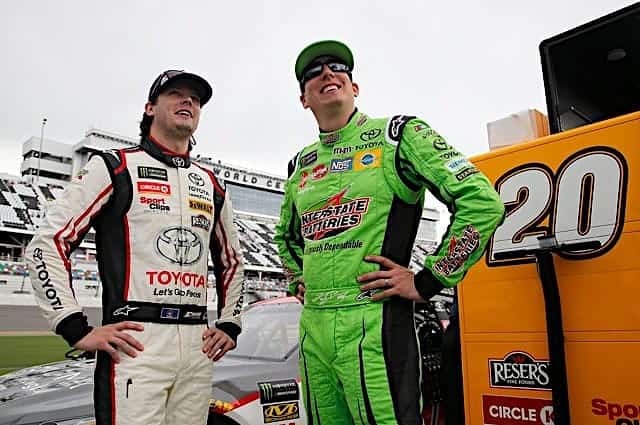 Did You Notice?… With four races left in the 2020 NASCAR Cup Series season, four drivers remain winless who won a race in 2019. That’s a relatively small number from year-to-year as the sport’s strongest teams and drivers have remained stable. Some of that could be due to the COVID-19 pandemic, limiting practice time for those who had already fallen behind.

Two of those four Cup drivers won’t even have an opportunity to win. Justin Haley, who pulled off the greatest upset in NASCAR this century at Daytona International Speedway last summer, doesn’t have a full-time Cup team to drive for. Neither does Kyle Larson, kicked out of his Chip Ganassi Racing ride in April after the racial slur heard ’round the sport.

Then, there’s Erik Jones, still on the sidelines for 2021 as the NASCAR Silly Season music begins to slow down. Jones, who won the Southern 500 last September, is finishing strong at Joe Gibbs Racing, with four top-four finishes in the six NASCAR playoff races. That’s the most of any driver on the circuit, better than title favorites Denny Hamlin and Kevin Harvick.

But odds are against Jones cashing in on victory lane. No one who failed to make the initial 16-driver postseason field has won a race during the playoffs since the format was introduced in 2014. No driver who failed to make the playoffs has won a race, period, since Jamie McMurray at Talladega Superspeedway in the fall of 2013. Jones does have a great track record at Kansas Speedway and Texas Motor Speedway, the next two tracks on the circuit, but so does his two Joe Gibbs Racing teammates still running for the title. You would think resources get tilted toward Hamlin and Martin Truex Jr. down the stretch. After all, we saw Hamlin win the pole at the Homestead-Miami Speedway season finale in 2018 only to give his first pit stall away to Busch, a Championship 4 contender.

And that brings us to Busch himself. Eliminated from the postseason at this stage for the first time since 2014, Busch now sets his sights on a different streak. He’s won at least one race a year since entering the Cup Series full time in 2005, a streak of 15 seasons that’s in serious jeopardy.

MOST CONSECUTIVE CUP SEASONS WITH AT LEAST 1 WIN

Busch, in theory, could win any of the final four races. He’s got a total of nine victories across Kansas, Texas, Martinsville Speedway and Phoenix Raceway, leading laps at two of those tracks earlier this year. Perhaps the burden of defending his title will lift the black cloud over the No. 18 team. It’s hard to count Busch out … you just never know with a two-time series champion. But it’s unlikely at this stage of the game. It feels like the battle he lost with Harvick at Bristol Motor Speedway last month was the final straw.

Busch isn’t the only one across all three series fighting to keep streaks alive. Here’s a few notable winless droughts in Xfinity and Trucks along with a few others in Cup threatening to extend into 2021… or forever.

Daniel Hemric. Hemric has gone 0-for-19 in a part-time NASCAR Xfinity Series deal with JR Motorsports after losing his Cup ride at the end of 2019, despite winning rookie of the year. That pushes his total to 0-for-173 across the sport’s top three series, many of those starts coming in high-quality rides capable of winning. Three straight top-five finishes in NXS have him knocking on the door before the year is out.

Brett Moffitt. It’s incredible that Moffitt, the 2018 NASCAR Gander RV & Outdoors Truck Series champion, is winless in 2020. He’d earned 10 victories in the past three seasons in Trucks, more than any other driver, and is contending for the title again with GMS Racing. Will he start a trend and become the second winless champion in a row after Matt Crafton?

Johnny Sauter. Sauter has won 14 Truck races in the last four years alone, but the longtime Thorsport Racing veteran didn’t even make the playoffs in 2020. At age 42, will a winless year seal the deal on his future with the series?

Retiring Cup drivers. Johnson, who’s been an afterthought during a 2020 playoff he didn’t make, hasn’t won in Cup since June 2017 at Dover International Speedway. That’s a streak of some 126 races. And without a top-10 finish since Dover in August, it’s likely he’ll slide off the stage without much more than a whimper. Ditto for Matt Kenseth, invisible since a second-place finish at Indianapolis Motor Speedway in July. He’s gone winless since November 2017 at Phoenix and will be lucky to score another top-10 finish in the No. 42 Larson left behind — let alone steal a win.

Clint Bowyer is in slightly better shape; he’s gone 0-for-89 since a victory at Michigan International Speedway in the summer of 2018. A winner at Martinsville that same year, he could conceivably contend there and pull an upset ala Jeff Gordon in 2015.

Did You Notice?… Jimmie Johnson is on pace for one of the more disappointing final seasons of a Cup career?

I took a look at some final full-time years for some of the sport’s best drivers in the modern era. (Note the full in full-time… for example, I considered Bill Elliott’s last season to be 2003 even though he raced a handful of times several years after that.) Johnson’s playoff miss, combined with a winless year, leaves him in the middle of the list.

What went wrong? Some might argue Johnson’s downward slide was to be expected. He missed the playoffs for the first time in 2019 and hasn’t been a weekly contender upfront since a little over three years ago. But I would disagree with that assessment. A seven-time champ, still in prime physical shape at age 44, could easily have bounced back to contend once again. Earnhardt was 43, after all, when he won his seventh and final title in 1994.

I think part of Johnson’s slump can be explained by the COVID-19 pandemic. Other than Kyle Busch, Johnson’s been hurt from a lack of practice time with relatively new crew chief Cliff Daniels. Keep in mind Johnson was fifth in points before the two-month suspension and returned to the track with a lot of momentum. He was leading in the first stage of the comeback race at Darlington Raceway in May before a mistake sent him spinning on the final lap of the first stage.

By the end of the month, a DNQ at Charlotte Motor Speedway had cost Johnson another top-five finish, and he never recovered. A COVID-19 positive diagnosis this summer snuffed out any hope Johnson would battle for a record-setting eighth championship. By then, Johnson’s interest in INDYCAR seemed to be a distraction, and the die was cast for a bumpy ending to this time in the No. 48.

Did You Notice?… Quick hits before taking off….

As someone who has battled anxiety and who has many close friends and family that fight their own mental health challenges, this incident should never have happened. Alex Bowman has made the decision to move on, and it’s his prerogative to accept an apology, as he was the one who was directly attacked. For Bowman, I feel that discomfort; being the center of unwanted attention is exactly what someone with anxiety would loathe. It’s one of many reasons why that type of behavior by a journalist would never be tolerated within Frontstretch walls.

Hopefully, it’s a learning lesson for all involved.

The author of Bowles-Eye View (Mondays) and Did You Notice? (Wednesdays) Tom spends his time overseeing Frontstretch’s 30 staff members as its majority owner. Based in Philadelphia, Bowles is a two-time Emmy winner in NASCAR television and has worked in racing production with FOX, TNT, and ESPN while appearing on-air for SIRIUS XM Radio and FOX Sports 1's former show, the Crowd Goes Wild.
@NASCARBowles
Previous Lewis Hamilton Drives Away from the Field, Fernando Alonso Back in the Car
Next Trevor Bayne, Take II: Fresh Start in NASCAR After Rough Roush Fenway Ending