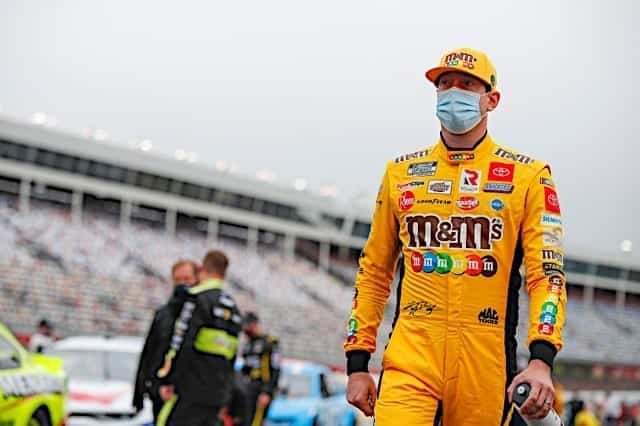 Arguably, 2020 has been the worst season of Kyle Busch‘s NASCAR Cup Series career. While his rookie season in 2005 is statistically his worst to date, he has yet to win through 32 races, and that would be a first for driver No. 18.
Busch turned 35 years old earlier this year, and while we believe he still has many, many years left in his career, the question arises by some about if we are beginning to see his dominance in the sport go away.
Was this year a fluke, or will we see Busch have years like this in the future? Can he find victory lane and keep up the streak? Is there anything different in Busch compared to past years?
Austin Cindric and Team Penske announced last week that he would return to the NASCAR Xfinity Series in 2021 in preparation for his jump to Cup full-time in 2022 with Wood Brothers Racing. Many would say he’s ready for Cup right now, but we have seen instances in the past where rushing young drivers to Cup has been a very poor idea. One more year in the lower series could do a driver wonders, as it has with this year’s Cup rookie class.
How important is the experience of that one last season in the lower series? What can be learned that has not been learned from previous years? What do drivers like Cindric and Noah Gragson have to prove in Xfinity next year before a move to Cup (potentially for Gragson) in 2022?

Q: Do you think this year was the start of the slow decline for Kyle Busch, or will he come back next year like his old self? Andy P., Indianapolis, IN

A: The issue with Busch this year was not the talent behind the wheel, rather it was tough luck and possibly team execution. I have no doubt that he has the driving ability unlike anyone else in the series — hell, he’s one of the best pure talents to have ever competed in NASCAR. Luck was not on his side this year at all, and we even heard how vocal he was about it. Almost every week something went wrong.
Of course when you have a career like he’s had, a winless season is a huge deal. A two-time Cup champion going winless in arguably the late prime of his career is shocking to say the least. Changes may happen for next season, but he won’t discuss that at the current time.
Was there ever a race Busch truly should have won this year though? In my mind, no. He led laps in many of them and had top-three speed as well, but the No. 18 car just never found that extra level he needed to get the wins. There are still four races remaining, and the only consolation prize in his eyes is to win.
I’ll go on record now and state: 2021 is going to be a huge year for him. Practice and qualifying seem to benefit him more than any other team out there, but even without that in 28 races, he will be determined. A decline is a very big overreaction, and you will not be seeing that in the driver any time soon. Expect him to win races and compete like he always has, and if he does not once again, maybe the conversation of the decline could come up. But for now, it should be nowhere in sight.
Q: With the announcement of Austin Cindric going back to Xfinity for one more season, how much worth is there to a young driver like him having one more year of lower series experience before Cup? Mike E., Naples, FL
A: For drivers like Cindric, it is a huge deal. Being rushed to Cup is something that a lot of young drivers have had to face in their careers and therefore, they haven’t had the success to start as they hoped for.
By staying in Xfinity for one more season, it helps Cindric with two things: building up his confidence as a driver on all types of tracks and giving him another opportunity to win an Xfinity championship. While he will get some Cup experience next year, it will be nothing like what he will face when he runs full time in 2022 for the Wood Brothers.
Think of the recent young drivers who have come up to Cup: William Byron, Christopher Bell, Tyler Reddick and Erik Jones to name a few. Reddick and Bell both ran two full-time Xfinity seasons before moving into their Cup rides this season. Jones and Byron only ran one, even though both had success right away. The only argument here is Byron could have been rushed to Cup. Even by winning the Xfinity title in 2017, that was his only season there, and he jumped right into the famed No. 24 Chevrolet the year after. Did it hinder his success right off the bat? I believe it did.
The perfect example of being rushed to Cup and why it is a bad idea is Daniel Suarez. After his 2016 Xfinity title, I don’t think there was a single person who said that he was ready for Cup. After Carl Edwards abruptly retired, Suarez was thrown into the ride, and just like any young driver without much experience, he did not find much success as a rookie. Now that Suarez has had a few years until his belt, he has learned a lot about the series, and he now has another opportunity with startup Trackhouse Racing.
Had Suarez not been rushed to the top, it’s possible he spends another year or two in Xfinity, giving him more experience. Throwing someone into a Cup ride too soon will be bad news, and it is almost never a good move.
Letting a driver stay in the lower series for a few years is not a bad move at all by these teams. Let them gain experience and develop more as a driver so they can have an idea of what Cup will be like once they get there. It might take patience, but any driver and team owner would much rather have patience with talent than to throw it away too quickly because of unfound success right away when they are rushed.
Sign up for the Frontstretch Newsletter

The thing that is bothersome about Kyle Busch is that he has won only one race since June, 2019. Of course, the race he won was the Championship race at Homestead, which tends to overshadow his struggles through the latter part of 2019. There is something amiss there, and I wouldn’t be surprised to see a shakeup at the #18 team. Maybe Adam Stevens and Kyle are no longer clicking as they did in the past. Also note that while Denny Hamlin has had a great season, Martin Truex has only one win and Erik Jones has none. Perhaps it’s time for a major shakeup at JGR, similar to what Penske did prior to this season, with a crew chief shuffle.