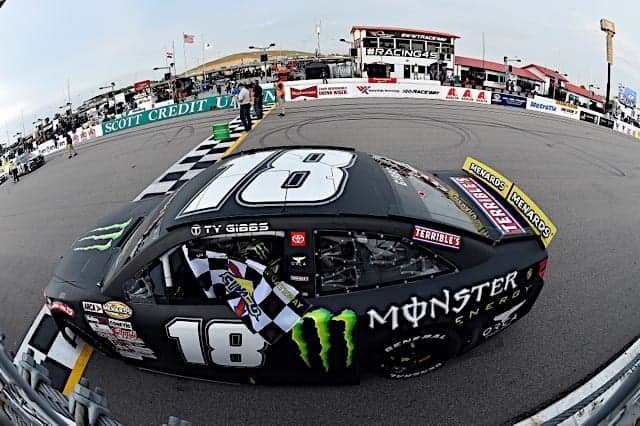 The ARCA Menards Series ends its season this Friday night (Oct. 16) at Kansas Speedway with the Speediatrics 150, concluding the series’ first season under NASCAR ownership. Only four drivers competed in every race this year: Hailie Deegan, Drew Dollar, Bret Holmes and Michael Self.

As this ARCA season ends, drivers and teams will begin preparing for the 2021 season. Naturally, a driver’s opportunity to run full time is largely decided by funding, and full-time drivers must be at least 18 years old. Who are five drivers who should run full time in the series next year?

Ty Gibbs turned 18 on Oct. 4, so he is eligible to compete on all tracks on the ARCA schedule. The grandson of NASCAR Hall of Famer and team owner Joe Gibbs, Ty has already displayed raw talent. He has eight wins in ARCA overall and wins in both the ARCA Menards Series East and West.

If Gibbs is not promoted to Trucks, then he becomes a favorite to win the ARCA championship. This year, despite only running 16 of the 20 races, he is fifth in the championship standings. He leads the series with six wins, the most poles and the most laps led. Moreover, he is tied for the second-most top-five finishes, more than full-time rookie drivers Deegan and Dollar.

Gibbs’ wins this year came at short tracks, the 2.5-mile Tricky Triangle of Pocono Raceway and the 1.5-mile Kentucky Speedway. He even finished second in his lone ARCA road course start. Gibbs is clearly ready to compete full time in ARCA, if not a higher division.

Before the COVID-19 pandemic occurred, Derek Griffith planned on racing full time with Chad Bryant Racing in ARCA East. Once racing returned, Griffith’s schedule shifted, but he has quietly impressed in his seven ARCA starts.

He has one top-five and six top-10 finishes with a career-best finish of fifth at Toledo Speedway. Griffith competed three times in ARCA East, finishing runner-up in the season opener at New Smyrna Speedway, then ninth at Bristol Motor Speedway.

In the ARCA East season finale at Five Flags Speedway, Griffith battled for the lead. However, with 42 laps to go, his fortunes changed.

Griffith is 23 years old, so he likely has a bright future ahead of him. He is like former Chad Bryant Racing driver Ty Majeski: both are accomplished late model drivers who have driven for the team. Griffith has won four times in a New Hampshire stock car series, so he would run well in the ARCA races at short tracks. Majeski won three times in a part-time campaign; imagine how Griffith would perform running full time.

Griffith has backing from Original Gourmet. If his funding increases, he would improve as a driver and return Chad Bryant Racing to victory lane in ARCA.

Twenty-six-year-old Kris Wright made his foray into stock cars this year, racing in the Truck Series, all three ARCA series and the CARS Super Late Model Tour. Of his starts, he has finished inside the top five on two occasions, both in the ARCA West road course races.

The road course veteran has logged plenty of laps on ovals this year though. In his five ARCA starts, he has finished four of them, albeit none on the lead lap. His only DNF was due to a wreck in his series debut at Michigan International Speedway.

Although Wright is tied to GMS Racing, he has only competed in the Truck Series and ARCA races at Michigan with the team.

Sam Mayer, who wheeled the No. 21 GMS Racing Chevrolet to both the ARCA East and Sioux Chief Showdown championships, will join JR Motorsports part time in Xfinity next year during the second half of the season, leaving the ARCA No. 21 vacant.

Wright can fill that seat, and he can also drive the car at the bigger tracks where Mayer is ineligible, such as at Daytona International Speedway.

GMS saw potential with Wright, and he has earned two tops 10s in his few ARCA races. Wright needs to log laps at a variety of different tracks. This year, ARCA has raced at superspeedways, 1.5-mile tracks, short tracks, a road course and a dirt track. Wright would be wise to use ARCA as a stepping stone as he continues his transition to stock car racing.

A full-time return to ARCA would benefit Gus Dean. After running full-time in ARCA from 2017-18, totaling one win, 12 top fives and 24 top 10s, Dean moved up to the Truck Series in 2019 with Young’s Motorsports.

However, his Truck Series rookie season was a struggle while his team also endured a tumultuous year. Tyler Dippel was suspended and Spencer Boyd opted to run part-time during the season, though scored an upset victory at Talladega Superspeedway. Dean remained the only driver to run full-time, and he finished 15th in the championship standings with only seven lead-lap finishes.

This year, Dean has split his time driving in the Truck Series, ARCA and one race in the CARS Tour at Franklin County Speedway. Both his Truck Series starts have resulted in wrecks, most recently two weeks ago at Talladega, though not of his own doing. In his four ARCA races, he has not garnered a top 10, nor a lead-lap finish. So this year has not gone well for Dean on the track either.

At 26 years old, Dean would benefit from competing regularly in ARCA. He has experience at the various circuits on the series schedule, so he arguably would be able to contend for top fives and top 10s quickly. Only four drivers have competed full time in ARCA this year, so Dean would quickly ascend the championship standings.

This year, Dean acquired sponsorship from MASHONIT Apparel Company. Last year, his Truck campaign was largely sponsored by LG Air Conditioning Technologies. If he can secure more funding or renew the sponsorship deal with LG, then Dean would be a contender in ARCA for wins and a dark horse for the championship.

The 20-year-old is mainly a dirt track racer (he won for the first time at his hometown track Weedsport Speedway on Sunday evening), but he has shown talent on asphalt tracks too. In 2019, he won the now-ARCA East race at Watkins Glen International. In a full season campaign, he amassed one win, four top fives and eight top 10s, along with two pole awards. McLaughlin finished fifth in the championship standings.

This year, he competed in four of the six ARCA East races. He finished a season-best third at Bristol Motor Speedway, a combination race between ARCA and ARCA East. In that race, he led 19 laps and finished ahead of ARCA championship contenders Self and Holmes.

Hattori has increased its Xfinity schedule with Hill. The team should also elevate McLaughlin to full-time competition in ARCA or maybe Trucks.