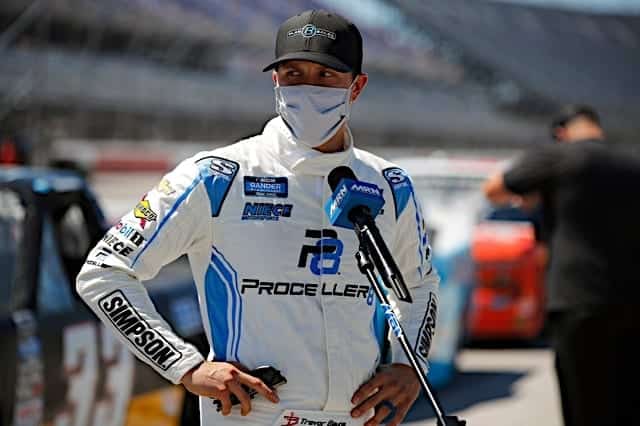 Two years ago, Trevor Bayne‘s NASCAR career looked bleak, having been let go from Roush Fenway Racing prior to the 2019 season.

Bayne, then-27 years old, competed in 21 of 36 races during the 2018 NASCAR Cup Series season, splitting the ride with 2003 series champion Matt Kenseth. But after spending the bulk of the past decade running with RFR, the driver was surprised to be let go, especially in the fashion he was.

“I didn’t want to be done, and with the way things happened at Roush, it didn’t really give me an opportunity nor time to figure things out,” Bayne recently told Frontstretch. […] “When that happened, I was frustrated, and the grind we had put in the two years prior to that at Roush; struggling and working hard.

“At that point, I was pretty bitter with it and ready to move on. I think it took a year or so. Even though I was pursuing rides, I was still upset with racing. It took a year or so to understand that it wasn’t necessarily racing I was upset at, it was the situation that I was put in.”

Bayne says he found out he wasn’t returning to RFR via a press release, as there was no internal discussion between he and team owner Jack Roush. When it was confirmed in mid-September, time was running out for the Tennessee native to find a quality ride.

“100%,” Bayne said of being caught off guard. “That was really tough after being there for so long, to feel that way and to know how hard you had worked and what you had done. To find out that way and not have a chance to work through it and for that to be the way it ended, that’s the frustrating part, there was no chance to regroup.

“I would have just liked to have conversations and worked through it. Even if the result was the same, I feel like I’m a pretty reasonable person that could have worked through it differently. It is what it is, we’ve moved on from it, and I talk to people from Roush. It’s not like I’m completely still bitter or anything like that. I’ve come to terms with it. I think the hardest part was it virtually ended my Cup career.”

Since his last Cup start at Texas Motor Speedway in early November 2018, Bayne has opened up a coffee shop (Mahalo Coffee Roasters in Knoxville, Tenn.) while spending additional time with his family. In the process, he’s gained a lot of perspective on the racing industry.

That perspective stems from learning what the real world is like, as some weeks Bayne’s worked over 100 hours to make the coffee business go. Quite simply, it’s a different grind from strapping into a racecar on the weekend and attending team meetings during the week.

All the while, Bayne was hoping to return to NASCAR, though he was never certain he’d land back on his feet. The 2011 Daytona 500 champion says there have been teams that have contacted him, especially after the news he was leaving Roush. But with the current economic climate of the sport, it came down to funding. There were other opportunities that weren’t so appealing.

“If I’m going to spend my life doing something, I want to be good at it,” Bayne said. “To go run, not be competitive and collect a paycheck, that’s not really what I’m here for. […] The other opportunities that were competitive required funding, and we had some really serious talks with good Xfinity teams, some mediocre Cup teams, and all of things ended up with funding. At that point, I came to terms with, ‘OK, unless I have funding, I’m not going to be in a competitive car because I’m not going to drive something that’s not competitive.’ That’s why I thought maybe my NASCAR career was over.”

When Bayne was running full-time in the Xfinity Series for Roush, Efaw was his car chief. The duo had some success, winning twice. Efaw wanted to get Bayne back behind the wheel and competing for Niece in the Gander RV & Outdoors Truck Series.

Originally, it was potentially just a one-race deal at Darlington Raceway, but when Ty Majeski abruptly left the team following a 13th-place finish at The Track Too Tough to Tame, Bayne got the nod for Richmond Raceway and Bristol Motor Speedway, and he most recently finished second at Talladega Superspeedway for the team. Bayne will finish out the 2020 season running one of the team’s trucks.

“[Niece] really struggled this year with no practice and wanted to get a litmus test of where they’re at and where they were struggling and what they needed to work on,” Bayne added. “Cody knew some of my experience, knew about my feedback, experience level and ability. He believed in that and wanted to give me he shot to comeback and drive something to see if I could help them out.”

Bayne admits initially he thought the idea was awesome. But at the same time, he made it clear he had no funding behind him. As the two sides continued to talk about the idea, Bayne realized the team would run him without funding, then hopefully sell races together once they got established.

Through four races, Bayne’s average finish of 23.5 isn’t a true indication of where he could have finished. Yes, he placed second on a superspeedway, but he also crossed the finish line inside the top five at Bristol, only for his truck to be disqualified. In his debut at Darlington, the No. 40 truck had a suspension failure early, relegating him to 27th. He backed that up with a brake failure at Richmond, resulting in a 29th-place effort.

Regardless of the finishes, he’s happy anyone even considered him to get back behind the wheel after not racing at all in over 21 months.

“Once you’re out for two years, you kind of assume it’s over,” Bayne said. “I just didn’t expect to have an opportunity at this level again, not for the lack of ability, just the way the sport is now. Once you’re out of the limelight for two years, it’s crazy to think teams would be thinking of you as a candidate.”

Prior to getting the call to run Trucks, Bayne had been in the process of building a dirt late model, as he was getting the “itch” to compete again.

Since starting his Truck career at 29 years old, he doesn’t see a big difference in the way the trucks handle compared to the Cup and Xfinity series cars. Like any series, clean air is king and dirty air is a different animal.

While Bayne admits he doesn’t know how far this opportunity will take him, he’s content running in Trucks. Should another opportunity to go full-time racing in either Xfinity or Cup come along, he’d consider it.

“I think being in the Trucks full-time competing for a championship, going to win, that sounds fun to me and something I want to do,” Bayne said. “Twenty something races a year, go and be competitive, one-day shows. With that many race per year, I could still run my (coffee) business.

“If you go back Cup racing, or even Xfinity at that matter, you’re full-time, it’s all that you have time to do and think about. That’s great, but it would be a different lifestyle again with travel.”

Nevertheless, Bayne doesn’t want to think about the future too much because he’s seen what can happen in the past. But it’s not to say it won’t be a second life in racing.

Bayne said, “I try not to get too sucked into it to the point where anything can happen. The way I see it in racing, getting a deal without funding is almost like winning the lottery in racing.

“I’m super thankful for the opportunity I’ve got with Niece. If it continues and we’re able to go full-time racing next year for a championship, that’s awesome. That’s what I would like to do.”

Best of luck to Trevor. One of the good guys!

I agree! Trevor is One of the Good Guys!!! A Real Class Act that Nascar should be Overjoyed to have! Best Wishes for Much Deserved Success!!

Nice story. I hope things work out for Trevor.

Trevor Bayne has to be one of the nicest classy drivers out there. Trevor got a raw deal from Roush and has always been head and shoulders above that group and how they treat their drivers.
Best of luck to you Trevor, your miles ahead of your ex-team. Any team and spinster would be lucky to have you in their drivers seat.

GOOD LUCK TREVOR, I’M SO HAPPY THAT YOU’RE GETTING ANOTHER SHOT! MAKE IT COUNT AND FORGET ABOUT ROUSH

I’m glad to hear he has a new perspective on racing. Vast majority of these up and comers don’t understand how lucky they are to be strapping into a racecar for a living, when there’s a lot of talent in the world that we won’t get to see because of how expensive the motorsport business is. It’s more about deep pockets than it is talent. Not fun grinding 100+ hours on something that isn’t your passion is it. Wish you the best of luck Trevor. Stay humble.

This Texas racing family wishes you the best Trevor.

I am excited to see Trevor behind the wheel again. He is such a nice person. You really did get a raw deal with Roush racing. They really are not all that competitive anymore. I really hope this deal with Niece Motorsports works out for a full run in 2021. Niece has nice equipment. Just keep the coffee on and go racing. I wish you the best of success in both endevors.

racefangurl
Reply to  Barry B

Trucks is probably the way for him, at least without selling his shop.