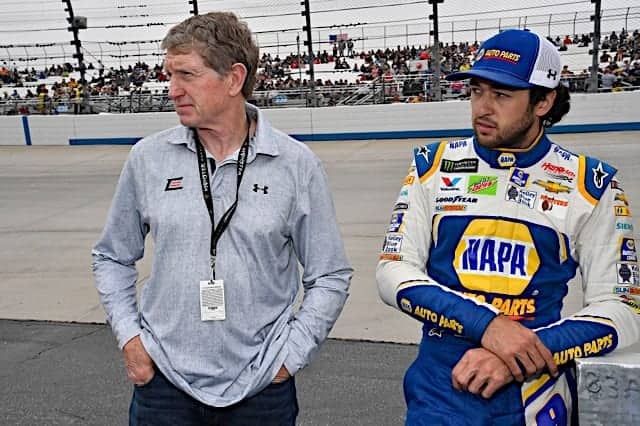 It would appear Chase Elliott’s career is moving along nicely.

In only five seasons in which he has run the full NASCAR Cup Series schedule with Hendrick Motorsports, he has won nine races to date.

Five of them have come on road courses — two at Watkins Glen International, one at the Daytona International Speedway road course and now, after this past weekend, two on the Charlotte Motor Speedway ROVAL. It’s fair to say he’s gained a reputation as a very competent driver when it comes to turning left and right.

And now that he’s safely in the Round of 8 in pursuit of a championship, he is a definite title contender.

Pretty good stuff for a kid who is not yet 25 years old, wouldn’t you think?

As you know, he comes from pretty good stock. His father Bill Elliott is a member of the NASCAR Hall of Fame whose career record shows 44 victories and a championship in 1988.

But in several ways the son isn’t like the father.

When he started his career in 1976, the first of several seasons in which he competed in selected races, the elder Elliott was 20 years old and competing with the team owned by his father George.

Not many folks paid him much attention. After all, his team was just another small budget outfit racing when it could. There were plenty of such teams back then.

But that changed in 1983. Harry Melling bought the family team and was able to provide it with additional dollars. That allowed Bill to run the full schedule. He earned his first career victory at Riverside International Raceway that year.

Well, well, well… Riverside, now the site of residential and commercial development, was a road course.

But Bill never gained a reputation as a roadie. In 1985, in only his third season with Melling, he turned NASCAR on its ear as he won an amazing 11 races.

His driving ability was never questioned, but what fell under scrutiny was his Ford – particularly the horsepower it was making. How was his engine builder, brother Ernie, producing such power?

Believe me, it was the hot topic of the day. Every member of the motorsports media – print and broadcast – pestered Bill with the same question: How are you so able to smoke the competition on the superspeedways?

Bill’s standard answer was: “It’s a combination.” Which meant the engine’s power and the Ford’s handling combined to produce the desired results.

He said that so often that more than one media guy said if he ever heard it again, Bill was going to get strangled.

In 1985, Bill claimed the first Winston Million bonus. It was a $1 million payout from R.J. Reynolds Tobacco Co. to any driver who could win three of four selected races. Bill won the Daytona 500, the Winston 500 at Talladega Superspeedway and the Southern 500 at Darlington Raceway.

Amid the wild victory lane celebration at Darlington, everything was littered by what seemed to be confetti. Actually, they were called “Elliott Bucks” – with the misspelled name “Eliott.”

By this time, there had been a big transition in the way Bill was perceived. He was a Georgia boy with curly red hair and a distinct Southern drawl. He seemed naïve and innocent. Many of us had nicknamed him “Huck Finn.” He didn’t seem to mind.

But from 1985 on, he was “Awesome Bill from Dawsonville.”

You have noticed, no doubt, that Chase looks nothing like his father. They are so different, in fact, that you might wonder if Chase was adopted.

Any Elliott fan can tell you that is not the case. Bill’s wife is the former Cindy Karam, the longtime photo editor at NASCAR Scene.

I knew Cindy well back then. I was supposed to be her boss, but I never considered myself as such. She was such a good photographer and department head that I thought it best just to stand aside and let her work.

Never did I have to ask her, “Did you get the shot?” I knew she and her staff always did.

Cindy had some Middle Eastern heritage – as best as I can recall it was Lebanon. She would joke about it by saying, “I’m a terrorist.”

So, it’s little wonder her dark-haired son resembles her.

Unlike Bill, Chase did not start his Cup career with a family team. He exhibited such skill as a youngster that he caught the eye of team owner Rick Hendrick – a man known to cultivate racing talent – and began driving for the multi-car Hendrick Motorsports at the tender age of 19.

Bill became so wildly popular that he was voted NASCAR’s Most Popular driver 16 times in 19 years.

Chase has now won the honor two years running and is likely to win it again this year.

Come to think of it, when it comes to the Elliotts, the proverbial apple may not have fallen far from the tree.

First, I’ve always felt. that, if you remove the coloring, Chase looks a lot like Bill.
Second, having listened to both of them on the scanner, they are alike in temperament.
Third, Chase is exceptional in giving feedback. I think he beats Bill in that area.

Chase has his mom’s olive skin and dark hair and not quite the drawl his father has. But I notice a lot of similar mannerisms and way of speaking. Sometimes he DOES seem like Bill Jr. (which is why they nicknamed him Chase to avoid the dubious honor of being a Junior). While Chase is often more aggressive than Bill and has taken to the short tracks better than his dad, they both are very smooth and precise in their driving style. Now all Chase needs is to get his 1.5 mile cars and setups to where he can win that first Championship. When he does, I’m confident he will best his dad in total championships won.

BTW, if anybody cares, I met Bill and Cindy the week before Chase was born. Mom was glowing and shyly said, “They tell me it’s a boy.”

I would also like to say that I’m so glad Steve Waid is writing for Fronstretch. He is a true sports journalist and knows and respects racing from the past, but doesn’t feel the need to put down the present NASCAR with every column.

Thank you very much!