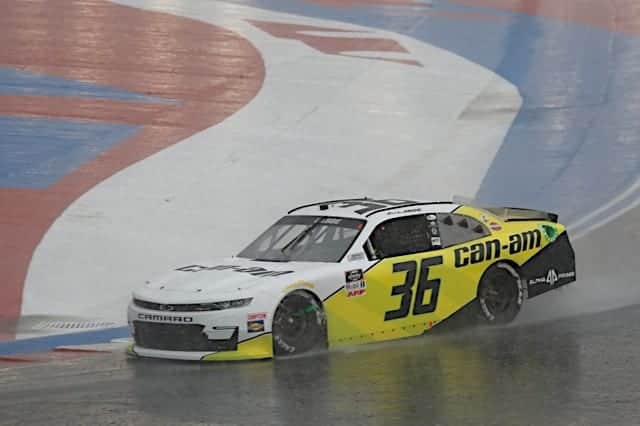 Saturday’s (Oct. 10) NASCAR Xfinity Series event was one that left many in the industry with a strong opinion. The race took a backseat to the weather, and the feelings on whether NASCAR should have been racing on Saturday were all over the place.

Since 2008, the NASCAR Xfinity Series has had the option of racing in the rain, strictly on road courses. Many other racing divisions have run in the rain for years, yet Saturday’s event was easily the harshest weather conditions NASCAR has ever raced in. Torrential rain from Hurricane Delta flooded the area. Visibility for the event was low, and many drivers took to the radio to express their desire to stop the event until the weather subsided.

With all this talk about rain, we decided to put it up for debate. Should NASCAR race in the rain? Luken Glover and Joy Tomlinson argue their stances.

Saturday’s Xfinity race was likely the craziest race I have ever watched. It seemed that at least one driver was spinning every lap. Cars were basically drifting trying to get through the turns. People have already argued that drivers already showcase their talent on dry tracks, but throwing in an occasional rain race really improves that case since it displays a different kind of talent. There were some drivers who had little hiccups, but they were able to blaze their way through the flood to fight at the end.

While Sunday (Oct. 11) did not display the same wet drama, it still had its moments. Ty Dillon won stage one! Not only that, but Timmy Hill finished that stage in fifth! That kind of parity was absolutely wild, and I want to see more of it.

I’ll admit that a bunch of races in the rain probably would not be the best thing, but a race or two like we saw at the ROVAL could make things very interesting. The reason Dillon and Hill finished the stage where they did was because of their tires. The slick vs. rain tires battle is one that would keep crew chiefs thinking constantly and create some good action.

It would not be the wisest thing to have drivers running through inches of standing water, which is why a portion of Saturday’s race was suspended. However, having them run on a slick road course certainly created some drama.

These drivers are some of the best in the country and in the world. They are expected to handle anything thrown at them. That does not mean there won’t be challenges or bumps, but eventually the perception is they should overcome it. The Daytona road course was a good example of how talented they are when you did not see a lot of spins and pileups.

These drivers have faced body changes, aerodynamic alterations, new tracks, team and car changes, and now they have faced the rain. So on a road course, rain or shine, it’s time to thrive. – Luken Glover

No, NASCAR should not race in the rain.

Rain, especially heavy downpours, can cause havoc when it comes suddenly. Just look at Saturday’s (Oct. 10) Xfinity race at Charlotte Motor Speedway ROVAL. Several cars went off course in the opening stages, at one point piling into a barrier in the infield. Additionally, many spun in the middle of the track, including Chase Briscoe on the final lap. Puddles grew, and if a driver wasn’t careful he would find himself in one (like Brandon Brown). Though the drainage system wasn’t very good at Charlotte, it’s ultimately the rain that caused the problem.

This was a road course where there are slower speeds and multiple braking points, and it had problems. Can you imagine an oval, where speeds reach up to 200 mph? Let’s just say rain and NASCAR don’t mix very well. Remember the 2001 Winston All-Star Race when Jeff Gordon won in a backup car?

Rain hit the track right after the field took the green flag, and multiple cars wrecked as a result. NASCAR allowed the drivers to return to the race in backup cars.

Another example of precipitation disrupting a session was in NXS qualifying at Daytona in 2014. As one group of cars ran on the back straightaway, the sky suddenly opened up and caused mayhem on the track. Several cars were destroyed.

It’s dangerous enough on these superspeedways without rain interfering with teams’ plans. Apart from the slick conditions, visibility could also be an issue if the rain was as hard as it was last Saturday. Drivers would have to brake much earlier than if the track was dry to avoid hitting those in front of them. And even with rain tires, all it takes is one wrong move for a car to spin or wreck.

Speaking of rain tires, costs might be higher across the industry since teams would need an additional set in case it does rain. In an era when NASCAR wants to keep costs down, these special treads wouldn’t help the effort.

While it has been a rough year in regards to weather delays, NASCAR should still stick to trying to keep costs down at all times. Other racing series race in the rain, but the majority of their races are on road courses, which changes the game. The majority of the NASCAR races are on ovals and the added budgets of rain tires for six events doesn’t make much sense. – Joy Tomlinson

Why do you guys make it a yes or no choice? How about applying a little common sense.

It’s a good option to race in the rain if it’s a dreary, wet, drizzly day. Or if it already rained and there aren’t any lights and NASCAR wants to get the race underway as the track dries. It’s kind of stupid if it’s a monsoon or deluge and I imagine if lightning is involved they can’t race anyway due to safety. So, yes, they should race in the rain if it’s manageable. Common sense.

NA$CAR doesn’t make ANY decisions based on common sense.

Thirty six per cent of the race was run under caution. And there were at least two times a caution should have waved and wasn’t.
It’s supposed to be a major league sport. Racing those big heavy cars in the rain lowers the sport to the level of a demolition derby. Why not have them race on a motocross track? Let’s see how good the drivers are there.
Tearing up expensive race cars is just the thing to do when the sport is facing a financial crisis is just plain stupid.
Saturday’s race was a fiasco to say the least. Anyone notice the tv ratings. They tell you what the fans think of it. Enough said.

Racing heavy stock cars in the rain in purely about $$ that the networks don’t want to lose. The safety of the drivers and cost of the carnage be damned. What we witnessed Saturday was shameful. It was NOT the best drivers showcasing their skills. It was a WWE style gimmick spectacle. But then again BF has taken almost all of the SPORT out of our beloved NASCAR. Here is an idea: Why don’t we ask “the best drivers in the world” to race blindfolded? That would surely add some DRAMA! NBC would probably get a few thousand NON FANS tuning in to see what happens. Wouldn’t that be great?? The people making decisions in NASCAR and the networks are just moronic.

Best drivers in the World ? ? ? We’ll see.
NO on racing left turn only in the rain.
YES on racing left’s and right’s in the rain. Although I don’t race any more, I’ve encountered similar wet situations in my occupation. And when common sense sez STOP, I stop, just like NASCAR did. Too bad on the pucker potential.
Go for it boys.

Red flagging for downpours on the road courses is a good idea, but as for a little rain, let em race. I think it does put more emphasis on driver skill instead of who has the best ($$$$) car. And as for the idea that NASCAR should do everything to keep costs down, they could’ve run the roval in the snow and still not inflicted the same dollar amount of equipment damage in the average race at Daytona or Talladega.