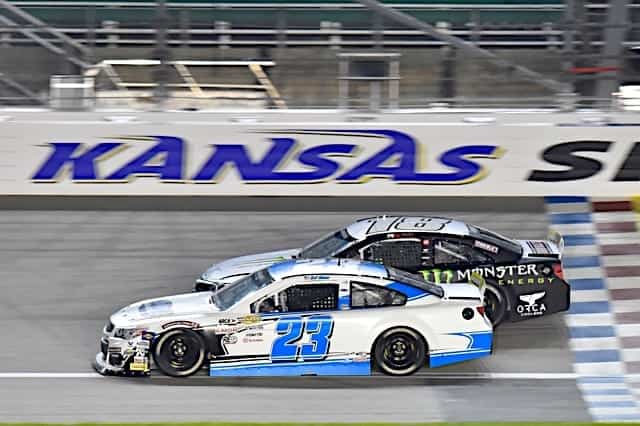 For the 21st time, the ARCA Menards Series will visit Kansas Speedway. The 1.5-mile track in Kansas City, KS will host the season finale for the 2020 season. The Speediatrics 150 will determine the champion and the rookie of the year.

This championship has come down to a Chevrolet vs. Toyota driver battle: family-owned Bret Holmes Racing vs. multi-car and reigning championship-winning Venturini Motorsports; 23-year-old Holmes with one career win vs. 29-year-old Self with nine career wins. This competition for the championship features two drivers who boast a combined 138 starts, several wins at Kansas, and 36 top 10s out of 38 opportunities this season.

There will not be qualifying for the Speediatrics 150, so the starting lineup will be set via owners’ points. As a result, Holmes will start second and Self will start third.

For Self, it is eerily similar to last year. He battled rookie teammate Christian Eckes for the 2019 title, only to fall 25 points shy of the title. Eckes finished first and Self finished second in the 2019 season finale at Kansas.

Self has notched a career-high 18 top 10 finishes this season, but he has been bested by Holmes in 14 of the 19 races this year.

“We certainly imagined we’d be in a bit of a better position. We imagined we would’ve had a couple more wins,” Self told media members in an ARCA Zoom call. “That applies to Venturini Motorsports as a whole. We have underperformed at a lot of the intermediate and half-mile tracks. We are not at the level we imagined nor wanted to be in. There’s mounting frustration that we haven’t found speed consistently, but it’s not from a lack of effort from Venturini Motorsports.”

“It’s a similar situation as it was last year racing Christian [Eckes],” he continued. “We had a tremendous amount of success. Last year, we shot ourselves in the foot too many times. This year, it is a similar level of frustration for me but a different reason. We have lacked speed, we have not been competitive, we have not gone to every race with a race-winning car. We are capable of that; we just have not executed to put it all together. It’s an unsettling feeling.”

Self won the season opener at Daytona International Speedway and the lone road course race at the Daytona road course. His number of laps led is its lowest since 2017.

Nonetheless, Self has performed well at Kansas, so he has a shot to usurp Holmes’ points lead to win the championship.

“We feel like we have a good idea of why we struggled at this track over the summer, and we’ve looked at the notes from our teammates who ran well that night, and we’re confident that we can build on their top-three finishes,” Self said in a team release. “Our goal is to go in and lead laps and win. We have nothing to lose from the championship perspective, so we’ll be giving it all we’ve got.”

The single-digit points gap between Self and Holmes has not changed their attitudes about each other.

“Bret and I have raced against each other for several years now. We have raced each other with a lot of respect,” Self said. “We’ve both seen ups and downs from each other. Bret has seen me go from a part-time effort to full-time. I have seen Bret come from racing not as competitively to where he is now. I have a lot of respect for Bret and Shane [Huffman, his crew chief] for what they have done. Hopefully, they respect me for what I have done, including the Sinclair Oil deal. Whatever the situation is on the track, Bret generally races me with respect, and I always try to race him likewise. Whoever comes out on top, it’s been a treat to watch each other grow.”

As for Holmes, he reiterated similar feelings about Self.

“We’ve raced against each other for the past two-three years,” Holmes said in the aforementioned ARCA Zoom call. “I respect Michael [Self] a lot. We have raced against each other hard over the past couple of years but have not gotten into it with each other. We have been back and forth with them all season. We have finished ahead of them more, but the races they finished ahead of us has been by a good margin. We can’t count them out; they’re a good team and Michael is a good driver.”

Holmes won for the first time in his ARCA career earlier this year at Kansas. He is eager to return there.

“Kansas being the last race of the year is definitely helpful for us,” he said with a smile. “It also adds pressure because we won that race earlier this year, so there’s no reason we shouldn’t repeat there.”

At the beginning of the season, Holmes only intended on running part-time. Consistently good finishes coupled with changes to the ARCA schedule due to the COVID-19 pandemic encouraged Holmes to go chase the championship.

“This year proved a lot for me and our team,” Holmes answered when asked about what he would take away from this season, regardless of whether he wins the ARCA championship or not. “It has shown we are capable of contending. This year has been more important because my guys stuck with me. The win at Kansas really gave that confidence back to me as a driver.”

Holmes has driven his No. 23 Chevrolet four times at Kansas and improved in each race, culminating with his win there on July 24. He has two top-fives and three top 10s. Moreover, he has finished on the lead lap in three of his four trips there, with the outlier a DNF due to a crash in the 2016 season finale.

Proud to welcome Golden Eagle Syrup to the team for this weeks race at Kansas ?? pic.twitter.com/x7LB3NJED7

In addition to the championship battle, rookie of the year honors is up for grabs in the Speediatrics 150. Hailie Deegan leads Drew Dollar, who won at Talladega Superspeedway this season, by 25 points.

Deegan will be making her third career start at Kansas. She previously has eighth and ninth-place finishes, respectively, in her two prior races there.

“I think our team has come a long way since we raced at Kansas in July,” Deegan said in a team release. “We were very loose late in the race last time, so this time we should be able to go off our notes and get the set-up closer so we can really dial it in during the brief practice we get Friday afternoon.”

As for Dollar, he has finished seventh in both of his ARCA races at Kansas.

“I have a good feeling about this race and look to build on my past experience there,” Dollar said in a team release. “I think we’ll have a fast car, so we should be able to race up front and compete for a win.”

Outside of the championship and rookie of the year battles, two other drivers who have won this season are entered in the Speediatrics 150: Chandler Smith and Ty Gibbs.

Smith has never competed at Kansas before, as he turned 18 earlier this year and was previously too young to race at the track. He will start first in the NASCAR Gander RV & Outdoors Truck Series race at Kansas the following day.

Gibbs has never raced at Kansas before either, but he won at fellow 1.5-mile Kentucky Speedway earlier this year.

The race is set to take place on Friday, October 16 at 8:30 p.m. ET with TV coverage provided by Fox Sports 1.