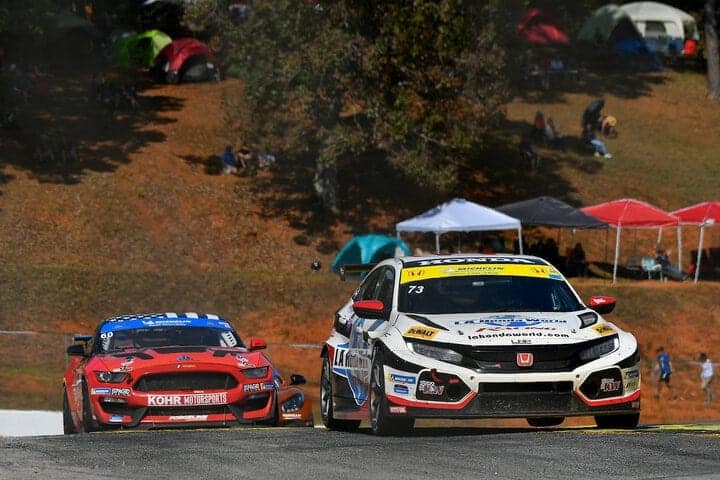 For IMSA Michelin Pilot Challenge, there are 35 cars entered in Friday’s FOX Factory 120 at Michelin Raceway Road Atlanta.  This is an increase of five cars over the previous round at Mid-Ohio.

The Grand Sport class has 22 cars entered with a number of changes.  Winward Racing’s No. 4 has Nico Bastian in the seat in place of Indy Dontje.  Dontje is committed to the full schedule for ADAC GT Masters and they are racing this weekend at the Red Bull Ring in Austria.  Bastian will be making his Michelin Pilot Challenge debut.  Dontje will also miss the race at WeatherTech Raceway Laguna Seca for the same reason.

Archangel Motorsports is not making a driver change, but they are making a chassis change.  The team has acquired an Aston Martin Vantage GT4 and will be racing that in place of the Porsche Cayman GT4 MR that they have campaigned since the beginning of 2019.

LAP Motorsports, which is the organization that runs the LA Honda World Racing team in the TCR class, has entered a Mercedes-AMG GT4 for Anton Dias Perera and Dan Clarke.  In practice, this is more or less the Bluff City Racing team that raced at Daytona earlier this season.

M1 Racing LLC is back after skipping Mid-Ohio.  Ashley Freiberg and Ryan Nash are back with the team.  Don Yount is not driving, but his Southwest Financial sponsorship still remains with the team.

TCR has 13 entries this weekend.  Atlanta Speedwerks returns to the grid for the first time since Daytona with their two Honda Civic Type-R TCRs.  Brian Henderson and Todd Lamb are back together in the No. 84, while Bryan Ortiz will share the No. 94 with Cliff Brown.

LA Honda World Racing is fielding two entries this weekend.  In addition to the full-time No. 77 for Ryan Eversley and Taylor Hagler, the No. 73 returns with Mat Pombo and Mike LaMarra.  Since their last Pilot Challenge race, Pombo swept the weekend at Indianapolis Motor Speedway in TC America’s TC class, driving a new TC-class Honda Civic Type-R that is being developed as a turnkey solution for teams in the class.

Copeland Motorsports has entered one of their Hyundai Veloster N TCRs for Tyler Maxson and Tyler Gonzalez.  Maxson is the 2020 TC America TCR class champion in dominant fashion before mechanical issues hurt his efforts later in the season.  Gonzalez drove a Veloster in the TCA class.

In addition, AOA Racing has entered an Audi RS3 LMS Club Sport.  Gino Manley and Giano Taurino will drive.  The team is a Kennesaw, Ga.-based outfit that primarily does arrive-and-drive track days.  The website also shows a picture (non-clickable) of one of the former eEuroparts.com ROWE Racing Audis, insinuating that they have that vehicle for this effort.

The FOX Factory 120 is scheduled to go green at 3:35 p.m. ET Friday afternoon.  The race will be streamed live on NBC Sports’ TrackPass service.