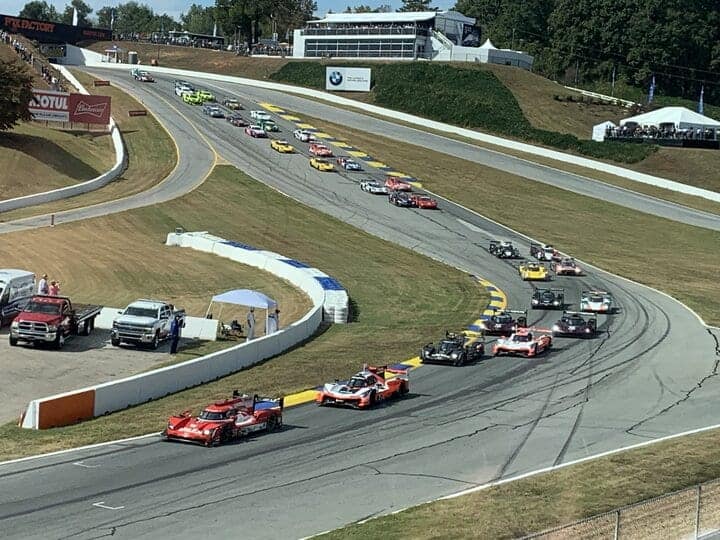 Normally, Saturday’s Motul Petit Le Mans would be the season finale for the IMSA WeatherTech SportsCar Championship.  With everything going on in 2020, it’s the third-to-last of the season and the penultimate race in the Michelin Endurance Cup.  31 teams will take to the 2.54-mile road course Saturday for 10 hours of racing.

The DPi class has the eight full-time entries.  Since this is a 10-hour race, everyone has three drivers at their disposal.  That said, there are some changes.  Most notably, Joao Barbosa is out at JDC-Miller MotorSports.  Tristan Vautier has moved over to the Mustang Sampling-sponsored No. 5 Cadillac to join Sebastien Bourdais.  Add in Loic Duval and you have an all-French driver lineup.

In the No. 85 Cadillac, Chris Miller returns to the seat as the team’s third driver.  Matheus Leist, who last drove when the series was at Michelin Raceway Road Atlanta last month, is back in the car along with Gabriel Aubry.

Outside of JDC-Miller MotorSports, there are additional drivers in the fold.  Acura Team Penske has Simon Pagenaud and Alexander Rossi back.  Wayne Taylor Racing has Scott Dixon, while Action Express Racing has Filipe Albuquerque, who already has six victories in 2020 in FIA World Endurance Championship and European Le Mans Series competition.  Finally, Olivier Pla and Ryan Hunter-Reay are back with Mazda Motorsports.

The LMP2 class has four entries.  Tower Motorsport by Starworks is back for the first time since the Rolex 24 at Daytona.  Ryan Dalziel has left the team, but maintains his “thunder buddy” friendship with Starworks owner Peter Baron.  John Farano is back with ELMS regulars Mikkel Jensen and Job van Uitert.  For Jensen and van Uitert, they will both be making their IMSA WeatherTech SportsCar Championship debuts.

Polish ELMS team Inter Europol Competition has partnered with PR1 Mathiasen Motorsports to run their second car, the No. 51.  Austin McCusker, previously of IMSA Prototype Challenge, will make his series debut in the car.  While they’re not listed on the entry list, likely due to IMSA licensing reasons, McCusker will be joined by ELMS regular Jakub Smiechowski and Rob Hodes.

Performance Tech Motorsports has a new driver lineup for this weekend.  Colin Braun, who raced previously for Era Motorsport, will be in the No. 38 ORECA 07-Gibson this weekend.  He’ll be joined by Jim McGuire and Matt Bell.  McGuire is full-time in the ELMS’ LMP3 class for United Autosports, while Bell has raced in IMSA on and off for years, primarily in GT equipment and in Michelin Pilot Challenge.

GT Le Mans has the same six teams entered from Charlotte last Saturday.  Corvette Racing has elected to repair the No. 4 Corvette that was damaged in a late crash after suffering a suspension failure on the banking.

Extra drivers for this weekend include Nick Catsburg and Marcel Faessler for Corvette Racing and Augusto Farfus and Colton Herta for BMW Team RLL.  Finally, the Porsche factory has tapped Matt Campbell and Mathieu Jaminet for endurance duties.

GT Daytona has 13 teams entered, an net increase of one team from Charlotte.  In reality, it’s two extra teams since Compass Racing’s McLaren is not entered.

Scuderia Corsa is back after having missed the last two races so that Cooper MacNeil could focus on the Ferrari Challenge Trofeo Pirelli championship.  Regular teammate Toni Vilander is out for the weekend.  Multi-time class champion Alessandro Balzan jumps in to replace Vilander, while Jeff Westphal is back as well.

The Toronto-based PFAFF Motorsports is back with their Porsche for their first start since the Rolex 24 at Daytona in January.  The extended closure of the U.S.-Canada border has made it impossible for the team to compete in the series (the original plan was for them to run full-time).  Dennis Olsen and Zacharie Robichon are back, along with Lars Kern.

AVS Vasser Sullivan has another new face.  Defending Indy Pro 2000 champion Kyle Kirkwood will make his series debut in the Lexus No. 12 as their third driver.  In addition, Frankie Montecalvo returns after getting married last weekend.  Michael de Quesada, who subbed for Montecalvo in Charlotte, will be the third driver in the No. 14.

Hardpoint Motorsports has a revised lineup due to Spencer Pumpelly‘s existing deal to race with GRT Magnus in the endurance events.  Markus Winkelhock, who drove for the team in the Indianapolis 8 Hours earlier this month, will join the team along with Andrew Davis.

Practice from Michelin Raceway Road Atlanta starts Thursday morning.  The race is scheduled to go green at 12:40 p.m. ET Saturday.  TV coverage will be split between NBCSN and NBCSports.com.