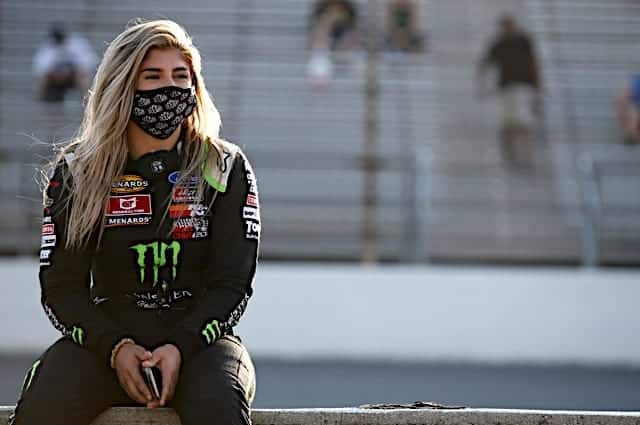 After taking last weekend off while the NASCAR Cup and Xfinity series raced at the Charlotte Motor Speedway ROVAL, the Gander RV & Outdoors Truck Series is back in action the next four weeks to close out the 2020 season. Beginning with this weekend at Kansas Speedway, the series then heads to Texas Motor Speedway and Martinsville Speedway before ending the year at Phoenix Raceway.

First Shot at the Championship 4

The Truck Series’ third visit to Kansas this season marks the first chance for a driver to lock into the championship battle at Phoenix Raceway in just a few short weeks. And of course, all eyes will be on those eight drivers as they battle it out for a spot in the Championship 4.

Welcome to the Round of 8. How's your pick for the 2020 @NASCAR_Trucks Championship doing after Talladega? pic.twitter.com/HBDtX9JAXO

Austin Hill and Matt Crafton split the doubleheader weekend at the mile-and-a-half oval earlier this season, so you can imagine both enter this weekend with a little extra swagger in their step.

But perhaps it’s Zane Smith who has the least amount of weight on his shoulders right now. After an early incident at Talladega Superspeedway a couple weeks ago took him out of the race, he had to wait until the checkered flag to find out whether his championship hopes were over. He made the cut, and this week, he and GMS Racing also announced a contract extension.

Hill and Sheldon Creed enter this weekend tied for the point lead but find themselves just 12 markers above the cut line for the Championship 4. Currently, Smith and Grant Enfinger are the other two drivers in the top four.

Brett Moffitt, who’s had a consistent season but has not yet found victory lane, sits fifth, three points below the cut line, followed by Ben Rhodes, who’s five points back. Matt Crafton and Tyler Ankrum sit 10 and 16 markers back, respectively.

Much of the buzz around Hailie Deegan this season pointed toward her making her Truck Series debut at some point, especially since the ARCA Menards Series team she races for – DGR-Crosley – also fields trucks. But after the COVID-19 pandemic put a stop to sports and the return has continued to inch toward the season’s end, it started to look like less of a possibility.

But last week, the announcement came that Deegan will pilot the No. 4 Ford Saturday at Kansas Speedway.

Can’t wait to get behind the wheel of this @Ford F-150 at @kansasspeedway ? pic.twitter.com/S7gPb88kWv

“This is a big weekend for me. It’s the ARCA season finale and my first truck start at Kansas,” Deegan said of her upcoming debut. “I was happy when they announced the schedule change so now I can run the ARCA race first on Friday and get those extra laps before racing the truck on Saturday. Before I was going to have to run both races back-to-back on Friday with the truck race first, which was not ideal for me.

“The competition in the Truck Series is very good, which will make this that much harder, but it will help my development so much. This is a big step for me and I’m excited to take on this learning curve.”

Deegan has been racing since she was six years old but spent most of her time growing up racing off-road and on dirt. It wasn’t until 2016 that she made the switch to asphalt. In 25 ARCA starts over the last two seasons, Deegan has five top fives and 20 top 10s.

As of now, Deegan isn’t scheduled to run any more Truck Series races this season, and her 2021 plans are unclear at this point. But you can bet this weekend’s performance will be used to sell her future.

Timothy Peters will make his first Truck Series start this season when he fills in for Stewart Friesen. A recent schedule change that moved the race from Friday night to Saturday afternoon presented a conflict for Friesen, who had already committed to running the Short Track Super Series Speed Showcase 200 at Port Royal Speedway in Pennsylvania the same day.

“Since we are not in the playoffs this year, we decided to bring in Timothy Peters to drive the truck for us at Kansas,” Friesen said in a team release. “We are really excited to see what Timothy can do with the HFR No. 52 Toyota Tundra. With his successful history in the Truck Series, we are confident in his ability to drive our truck to a strong finish.”

Peters raced full-time in the Truck Series from 2009 through 2016 and had plans to run the full 2017 season. But five races into the year, Red Horse Racing abruptly shuttered its operations after the Truck Series’ visit to Charlotte Motor Speedway. Since then, he’s made just a handful of starts, one of which included a win at Talladega Superspeedway for GMS Racing in 2018.

Given this year’s struggles for the No. 52 team, Peters’ lack of seat time in recent years and the lack of practice and qualifying, it’ll likely be an uphill battle this weekend. But what’s important to note is that Friesen’s team has been on the upswing in recent weeks. After struggling for much of the first half of the season, Friesen has posted six top 10s in the last eight races, including a fourth-place run at Las Vegas Motor Speedway.

Smiling because IM CLEARED TO RACE! I’ll be back in the truck with @NieceMotorsport at Texas and Martinsville. I will also be doing some more road racing with Ave Motorsports out west in the GT4!! ???? pic.twitter.com/4t8fzib5Tn