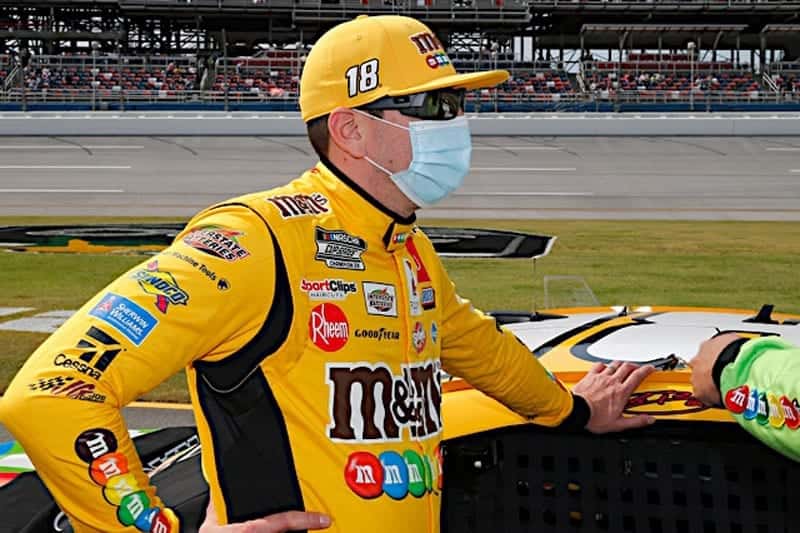 Was Kyle Busch’s performance in 2020 the worst season ever by a defending NASCAR Cup Series champion?

Luken Glover: It’s definitely in the top 3. The only factors keeping it from No. 1 are that there is no practice since the restart and that he has been running solid when chaos strikes. The two seasons I compare it to are Dale Earnhardt’s 1992 season and Brad Keselowski in 2013. Out of the three, Earnhardt had the fewest top fives and top 10s, though there were only 29 races that season. All of them had (or, in the case of Kyle Busch, have had) an average finish of either 14.7 or 14.9. They also all led in between 400 to 500 laps, with Busch being the lowest, with 417 thus far. Earnhardt’s year makes a strong argument, but again, there were only 29 races compared to 36. While Busch will likely finish in the top 12 in points, Keselowski failed to make the 12-driver postseason in 2013. His only win came because of tire strategy that helped him pass Kasey Kahne. Keselowski was also lowest in points out of the three. So in the end, each one has an argument, but Busch certainly has one of the worst.

Frank Velat: It depends. If Busch finishes out the season without winning one of the remaining four races, then absolutely. The defending  champion has been winless before, as Earnhardt endured a victory-free 1981. But as an elite driver on a top-level team, there is no imaginable scenario in which Busch should be winless through 32 races. Yet here he is. I’m still not convinced that he won’t break through, as he is usually very good at Martinsville Speedway and Phoenix Raceway. But it’s hard to believe he’s gone nearly a year without a Cup victory.

Amy Henderson: The season’s not over yet, and Busch is a driver you can never quite count out, even when it seems like you should. In other words, he could still win. He could win more than once with the pressure of the playoffs off his back. That said, I agree that it’s up there with Earnhardt’s ’92 season in the current era of the sport. But it’s not really a surprise, and it’s not all because of the lack of practice. Busch had a terrible playoffs last year, mostly leaning on playoff points from earlier in the season to get by. His title run was by no means dominant, so it wasn’t the flip of a switch that some have made it out to be. The sport is cyclical; Busch isn’t done yet.

Would you consider Clint Bowyer’s NASCAR career a success?

Velat: Yes. Clint Bowyer has an Xfinity Series title, as well as a handful of Cup victories. His 2012 season was certainly the peak, and I never minded a Bowyer win because any time he had a microphone in front of him, you knew you were going to hear something good. Now that he’ll have one on him all the time, it’ll be interesting to see what level of Bowyer we will get on TV. After the infamous spin at Richmond Raceway, his career very well could have been over, but it was good to see him rebound enough to not be forever stigmatized by one mistake.

Henderson: Yes, absolutely. He has 10 wins. In over 70 years, there are exactly 61 drivers with 10 or more wins, of the hundreds who have competed. That’s damn impressive. No, Bowyer isn’t a Cup champion, but that should not be the only mark of a successful career; it’s not even the only mark of a Hall of Fame career, so holding Bowyer to that just to say he’s been successful is silly. He’s stuck around for far more than a cup of coffee, and he’s made enough of an impression to be offered a broadcast position in his retirement. A lot of drivers would be happy to retire with Bowyer’s career.

Glover: To reach double-digit wins in the Cup Series is certainly a big accomplishment, even if it isn’t near as high as many others. He has 10 wins, 225 top 10s, 82 top fives and a solid average finish of 15.6. They aren’t the most impressive statistics but are nothing to sneer at. He also was a championship contender in 2012, finishing second in the points. We also cannot forget his accomplishments in the Xfinity Series, winning the 2008 championship. There were some bruises, including being on the brink of going winless with Stewart-Haas Racing for the second straight year, but while there was some left to be desired, Bowyer had his moments of glory in NASCAR that will follow him to the booth.

With so many road courses being added to the schedule, will AJ Allmendinger get another shot in Cup? If so, in what car?

Glover: This is a possibility that has certainly become more logical when one thinks about it. If AJ Allmendinger really wanted it and a team liked the idea, it could become a reality. If so, the ride that makes the most sense is at Spire Motorsports. Allmendinger has made appearances with Kaulig Racing, which has had links to Spire with Justin Haley and Ross Chastain. It is also expected to be somewhat more competitive next season. We have seen what Chastain has done in the No. 77 with some alliance help, running anywhere from 15th-25th instead of 30th-35th. Another ride that could be a possibility is at Go FAS Racing. It does not have a clear-cut favorite for the ride, with Chase Briscoe likely getting the No. 14 and Kyle Larson being the favorite at Hendrick Motorsports. This is a team also looking to improve, and Allmendinger could certainly help it on road courses.

Velat: Someone ought to call him. He’s as good as anyone on a road course, and Allmendinger has proven his worth outside of tracks with right-hand turns, as well. Allmendinger has made 10 starts in the Xfinity Series this year, six of them on ovals. He crashed out of two but has finished the others 10th or better, including two wins.

Henderson: He could, but there are a lot of drivers out there, and Allmendinger, while not bad on ovals, didn’t set the world on fire there, either, and there are still 30 ovals on the schedule. Plus, I’m not sure Allmendinger would want the full-time grind anymore. His part time schedule allows him to race for fun on tracks that he enjoys. A full-time run with tracks he struggles at still has its perks, mainly the paychecks, but it would be more stressful and less fun.

Hailie Deegan makes her Gander RV & Outdoors Truck Series debut this weekend. Do you see her as a potential contender?

Henderson: The fact that this is a question is part of the problem with the sport right now. Contending for a win in her first national start is a ridiculous expectation for any driver, let alone one as young as Hailie Deegan. Drivers are pressured by sponsors and media hype to perform out of the box, and while a select few elite talents might do that, a rookie’s first race at the national level should be about logging laps and learning to race the more experienced drivers around them. With a mid-tier team, she could run top 15, and anything more would certainly be icing, but if she finishes the race and learns, it will be a successful debut. The fact that anyone wants more (other than the driver, of course) is part of why so many promising youngsters struggle with funding and finding rides later on, labeled as damaged goods before they had much of a chance to prove otherwise.

Glover: I do not see her being in contention for the win unless we have a wreck-fest. She has a good chance at running around the 10th-15th area, but a top five would be a stretch. Deegan certainly has talent, but she is still searching for her first win in the ARCA Menards Series this season. To run in the top five around drivers with much more experience and in a higher series is a tall order. She will have a solid weekend, but I don’t expect her to be in the running for a win.

Velat: No. Deegan is good for her age and experience leve,l but there’s a big difference between ARCA and the Truck Series. Plus, DGR-Crosley is more of mid-level team — not underequipped by any means but not quite on par with ThorSport Racing, GMS Racing or Kyle Busch Motorsports. There will be a learning curve, and that’s OK.

As far as I am concerned the defining memory of Clint Bowyer’s career will be the spin at Richmond. That will overshadow everything else. If there were ever a three hour “History of NASCAR” documentary on TV, that’s the only way I could see his name coming up.

I believe Bowyer”s career was a success for him personally. However, I also agree with Bill B that his main “contribution” to the sport was Spingate, which is hardly a great legacy.

While Bowyer could have refused the spin request, I still put the blame for Spingate on MWR. Bowyer was told to to “itch that arm” by crew chief Brian Pattie. Bowyer promptly spun the car as he was told. It may have tainted his legacy, but, but the real villain was the buffoon who ran MWR.

So next year Bowyer will be paired with Jeff Gordon in the Fox booth. Considering their history, that might be interesting.

Don’t forget Ty Norris has a big part to do with this as well.

Yep. I think this sort of thing still goes on a some race teams to a lesser degree, but they’re more subtle about it.

Now Fox will have two cheaters,Mikey and Bowyer.

I’d be perfectly happy with KyBu not having a win this season. He’s spent years beating people in the trucks and xfinity series and in general making a jerk of himself most of the time. I don’t consider him much of a good example of a champion under any circumstances.

As far as Bowyer, yes his claim to infamy will always be the spin at Richmond.

As far as his being in the booth with Gordon, didn’t they do the iracing thing together? So I think they’ve dealt with whatever animosity they may have had towards one another.