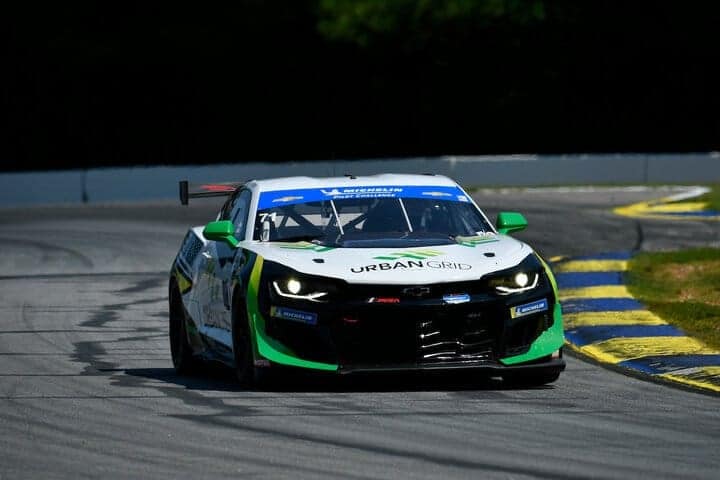 Rebel Rock Racing’s Robin Liddell was fastest in IMSA Michelin Pilot Challenge practice Thursday (Oct. 15) at Michelin Raceway Road Atlanta with a lap at 106.347 mph.  The quickest lap of the day came less than 15 minutes into the first session of the day,.

Liddell’s No. 71 Chevrolet Camaro GT4.R was on top of the speed charts for almost the entire morning practice session.  His lap was nearly four-tenths of a second faster than Multimatic Motorsports’ Sebastian Priaulx, the defending race winner.  BGB Motorsports’ Jan Heylen was third fastest in his Porsche, while CarBahn Motorsports with Peregrine Racing’s Tyler McQuarrie was fourth fastest in his Audi.  PF Racing’s Chad McCumbee was fifth.

M1 Racing LLC was lucky even to make it to the first practice session.  During Wednesday’s untimed open track session, Ryan Nash had his anti-lock braking system (ABS) fail entering turn 6.  This resulted in a spectacular crash that saw the team’s McLaren 570S GT4 leave the track and end up over the wall.  A fan at the track Wednesday afternoon captured this shot of the stricken McLaren on a rollback.

have you got an update on whoever was driving the Mclaren? I can't say this was nice to see after that long of a red flag and the ambulance. hope they're good and the cat will be ok for a rebuild. anyhoot good job getting something out of the session and see you tomorrow. pic.twitter.com/wGFAOm7BSD

Luckily, Nash is ok and will race this weekend.  The yellow Porsche Cayman GT4 MR in the Instagram post below from Nash’s teammate Ashley Freiberg is the car previously raced by Archangel Motorsports prior to their Aston Martin switch.  That will allow the duo to still race this weekend.  Freiberg was 17th quickest in the session.

In TCR, Atlanta Speedwerks’ time away from the series has not hurt their pace.  Cliff Brown put the team’s No. 94 Honda Civic Type-R TCR at the top of the class with a lap at 102.708 mph.  Brown’s lap was one-seventh of a second faster than teammate Todd Lamb in the No. 84 Honda.  Bryan Herta Autosport’s Gabby Chaves was the fastest of the Hyundais in third, followed by Tyler Maxson in the Copeland Motorsports Hyundai.  Fast MD Racing’s James Vance was fifth in his Audi.

In the afternoon session, Heylen was quickest in his Porsche with a lap at 105.582 mph.  This lap was one-sixth of a second faster than Priaulx.  McQuarrie was third, then Russell Ward in fourth, while points leader Kyle Marcelli was fifth.

Robby Foley in Turner Motorsport’s No. 95 BMW was sixth, then Liddell and Hindman.  McCumbee and Foss rounded out the top 10.

The session had a red flag 15 minutes in when Riley Motorsports’ James Cox went off at turn 6.  The team was able to make repairs and get the No. 35 Mercedes back on-course before the end of the session.  Cox’s best time, which ended up 12th in the session, came after the red flag.

Atlanta Speedwerks was able to keep up their pace from the morning to top the afternoon session as well.  This time, Bryan Ortiz was fastest in class with a lap at 102.574 mph.  He was nearly two-tenths of a second faster than Chaves, with Vance in third.  Maxson was fourth quickest, while Harry Gottsacker in Bryan Herta Autosport’s No. 21 Hyundai was fifth.

Qualifying for Friday’s FOX Factory 120 is scheduled to start at 6:15 p.m. Thursday evening.  There is no streaming of the session, but Frontstretch will bring you a recap of the session afterwards.