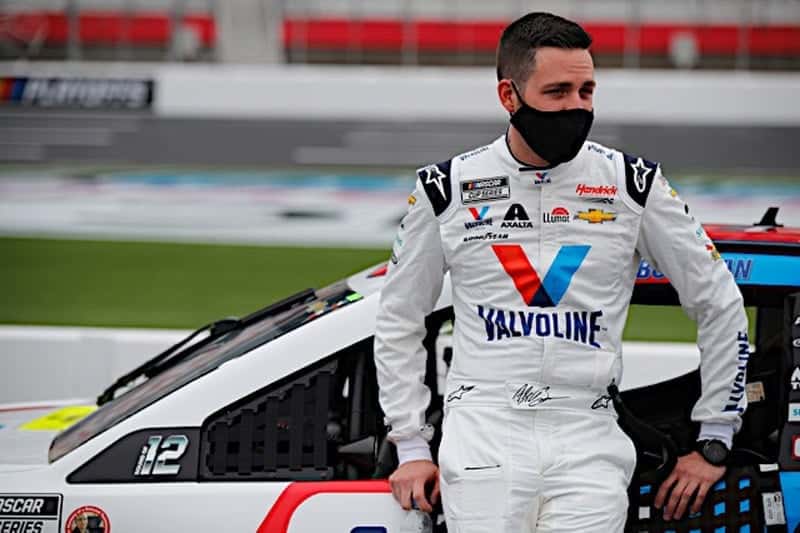 Kansas Speedway, which is now the newest facility on the NASCAR Cup Series schedule until the first event at Circuit of the Americas next May, has become a mainstay on the circuit.

The mile-and-a-half track opened in 2001 and has had some added banking from the initial fairly flat surface. Still, the venue shares similarities with other D-shaped ovals added to the calendar in the same time period, chiefly Las Vegas Motor Speedway and Chicagoland Speedway. This allows statisticians to look at and compare results at these tracks more accurately than, say, the difference between Bristol Motor Speedway and Martinsville Speedway.

This race will be the final event for Clint Bowyer at his home track. Bowyer doesn’t have an amazing record at Kansas, but he does have eight top-10 finishes in 24 starts. The most infamous of these came in just his second start at the track, when Bowyer passed a stalling Greg Biffle on the final lap under caution.

Bowyer “won” the race, but NASCAR ruled that Biffle hadn’t run out of fuel and thus would keep the victory. If this sounds really foolish on NASCAR’s part, that’s because it was, and this race is still remembered to this day as a showcase for NASCAR’s occasional inconsistency.

Hamlin’s stats at Kansas don’t look particularly great, but the key is just looking at his recent starts. Hamlin has won the last two Cup races at Kansas, and half of those top-five finishes at the track have come in his last six starts.

Hamlin hasn’t been untouchable on mile-and-a-half racetracks – he finished 17th in the first Las Vegas Motor Speedway race earlier in the spring – but he’s won enough races that it’s hard to write him off for the 400-miler. The No. 11 team actually avenged that Las Vegas result with a third-place finish and leading nearly half of the laps in the fall event a few weeks ago.

The 2012 Cup champion has always enjoyed consistency at Kansas. Keselowski has only finished outside of the top 20 at Kansas three times, and he was still good enough to lead laps in two of those starts anyway.

The reason to go with Keselowski this week is relatively simple: Penske is great at the flat mile-and-a-half tracks, and it would be strange if Keselowski can’t end up with a win on one of them this season. Even if he doesn’t, he should at least bring home a decent result for your fantasy team.

Hendrick Motorsports is still quite solid at mile-and-a-half racetracks. Kurt Busch was able to win at Las Vegas with a Hendrick engine, while Bowman was able to finish fifth in the same race three weeks ago.

Bowman is due for a win at Kansas. He came close to a win in the spring race last year, where he ended up losing a late race duel with Keselowski. That race, by the way, had only three finishers in the top eight that were non-Hendrick powered. Bowman may also may well go down in history as the final winner at Kansas’ sister track, Chicagoland Speedway, after his victory last year.

For a driver who finished second in the last “normal” oval race, DiBenedetto is at a really good price this week. This is almost entirely due to his lackluster record at Kansas, with a best finish of 15th that was achieved in the fall race last year. That was his lone top-20 finish in the Sunflower State.

In July, DiBenedetto wrecked on lap 175 and failed to finish. Before that, the Californian was in the top 15 for 159 laps- meaning DiBenedetto spent just 16 laps outside of the top 15 that entire race. At $8,500, this driver can be of great value for a fantasy team if he can just finish there.

Considering how Preece left the last race at Kansas, it’s great that he can be selected now.

It’s a shame that Preece had such a horrible regular season, because he’s really seemed to find some speed this past month. Preece had six top-20 finishes in the 26 race regular season. He’s scored the same amount of top 20s in the past six races, which includes top-10 results at Bristol Motor Speedway and Talladega Superspeedway, and a very impressive run at the Charlotte Motor Speedway ROVAL last week, leading a career-high eight laps.

Preece should be able to continue this late season push and score another top 20 on Sunday, which is excellent for a driver with a $5,000 price tag.