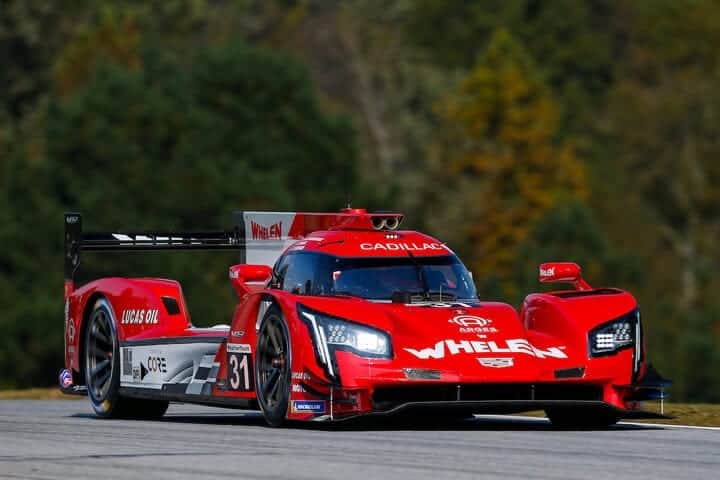 So far, the Motul Petit Le Mans race weekend is looking a little like last year’s edition.  Action Express Racing dominated that weekend and they dominated the speed charts on Thursday (Oct. 15).  Filipe Albuquerque was fastest overall in practice with a lap at 132.081 mph.

In the morning practice session Thursday, Acura Team Penske’s Ricky Taylor was fastest with a lap at 130.468 mph.  This lap was seven-hundredths of a second faster than Mazda Motorsports’ Oliver Jarvis.  Teammate Jonathan Bomarito was third fastest, followed by Felipe Nasr in the Action Express Cadillac, who was quickest early in the session.  JDC-Miller MotorSports’ Sebastien Bourdais was fifth.  The entire class was separated by less than eight-tenths of a second.

There was one brief red flag in the session with just over 10 minutes remaining when Chris Miller spun the No. 85 Cadillac at turn 5 and stopped briefly.  He was able to get restarted and get back to the pits without too much of an issue, though.

The LMP2 was not far behind.  Tower Motorsport by Starworks’ Mikkel Jensen was quickest with a lap at 128.647 mph, good for ninth overall.  This was less than a second slower than Taylor.  Jensen’s lap was nearly a half-second faster than PR1 Mathaisen Motorsports’ Scott Huffaker, while Performance Tech Motorsports’ Colin Braun was right on Huffaker’s heels.

GT Daytona saw Paul Miller Racing’s Bryan Sellers go fastest with a lap at 114.377 mph.  Sellers was one-sixth of a second faster than the similar Lamborghini of GRT Magnus’ Andy Lally.  The Heart of Racing’s Darren Turner was third quickest in his Aston Martin, while AIM Vasser Sullivan’s Jack Hawksworth was fourth in his Lexus.  Wright Motorsports’ Patrick Long was fifth.

Albuquerque turned in the quickest lap of the day 32 minutes into the 75-minute session Thursday.  It was the third of a sequence of quick laps that lowered the best lap time into the low 69-second bracket.  The session itself was clean with no interruptions.

Albuquerque’s lap was more than half a second faster than Mazda Motorsports’ Tristan Nunez.  Wayne Taylor Racing’s Ryan Briscoe was third fastest in his Cadillac, while Acura Team Penske’s Dane Cameron was fourth.  Helio Castroneves in the second Acura was fifth.

PR1 Mathiasen Motorsports’ Simon Trummer was fastest in LMP2 with a lap at 128.371 mph.  This was one-sixth of a second faster than Braun.  Tower Motorsport by Starworks’ Job van Uitert was third.

In GT Le Mans, Garcia was quickest in his Corvette with a lap at 118.906 mph.  The lap was three-tenths of a second faster than Krohn, with de Phillippi in third.  Porsche GT Team’s Mathieu Jaminet was fourth, followed by Corvette Racing’s Tommy Milner.

Foley’s lap was a tenth and a half of a second faster than Paul Miller Racing’s Madison Snow.  Meyer Shank Racing with Curb-Agajanian’s Shinya Michimi was third in his Acura, followed by the Ferrari of Scuderia Corsa’s Jeff Westphal.  Misha Goikhberg is fifth in his Acura.

Times actually slowed a little during the 90-minute night session Thursday evening.  A half-hour into the session, Action Express Racing’s Pipo Derani was fastest in the session with a lap at 130.303 mph.  The lap was four-hundredths of a second faster than Wayne Taylor Racing’s Renger van der Zande.  This performance is more or less in line with last year as well.  After last year’s race, van der Zande told Frontstretch that his car was not so great during the daytime, but really improved once the sun set.  This is a paraphrase because van der Zande cussed a few times during the interview.

Cameron was third quickest, followed by Castroneves.  Mazda Motorsports’ Harry Tincknell was fifth.  The top five drivers were separated by one-eighth of a second.

Miller ran into more issues here.  Riley Motorsports’ Ben Keating spun his Mercedes in turn 2.  Miller, in an attempt to avoid Keating, slid off-course and hit the wall.  The contact knocked off Miller’s rear wing and caused a red flag.  The incident ended the Cadillac’s session.

LMP2 saw Jensen fastest once again with a lap at 128.436 mph, good for eighth overall.  This was three-tenths of a second faster than Braun, while Trummer was third.

For Inter Europol Competition, it’s been a bit of a struggle as the team gets used to an unfamiliar chassis (they normally race a Ligier JS P217-Gibson) in the European Le Mans Series.  In the night session, Jakob Smiechowski spun the No. 51 ORECA 07-Gibson at turn 10 and caused the session’s first red flag.  The car was not significantly damaged and went back out after a brief stay in the pits.

GT Le Mans saw the Porsches at the top once again.  Vanthoor was fastest with a lap at 118.366 mph, two-ninths of a second faster than teammate Frederic Makowiecki.  Corvette Racing’s Nick Catsburg was third fastest, then BMW Team RLL’s Augusto Farfus.  Milner was fifth quickest.

Hawksworth was quickest in GT Daytona night practice with a lap at 113.589 mph in his Lexus.  He was four-hundredths of a second quicker than the Porsche of Wright Motorsports’ Jan Heylen.  Hardpoint Motorsports’ Markus Winkelhock was third quickest in his Audi, followed by Scuderia Corsa’s Alessandro Balzan.  Turner was fifth.

Qualifying for Saturday’s 10-hour is scheduled for 12:35 p.m. Friday afternoon.  The session will be streamed live at IMSA.com.