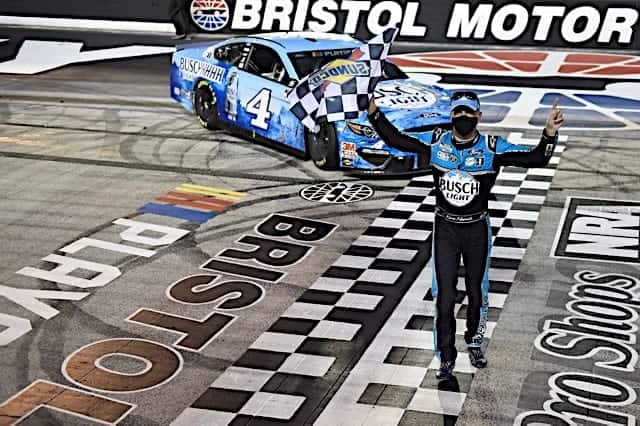 The Round of 12 was forgettable for Kevin Harvick, but don’t allow that to make you forget how dangerous the 2014 NASCAR Cup Series champion is.

Harvick, who has a series-high nine wins this season and has dominated 2020 statistically, was but a blip on the radar throughout the second round of the postseason, stringing together finishes of 10th, 20th and 11th at Las Vegas Motor Speedway, Talladega Superspeedway and the Charlotte Motor Speedway ROVAL, respectively.

By anyone else’s standards, those finishes wouldn’t raise much of an eyebrow.

But Harvick’s standards are different from the norm and have been for the better part of six years now, since joining Stewart-Haas Racing in 2014.

So why are those past three results statistically significant? They mark the first time since early August that Harvick has gone more than three consecutive weeks without a win.

Yes, Harvick’s season has been that absurdly stellar. The line of dominance strings back to the spring. Harvick hadn’t had three straight finishes of 10th or worse since June, when he finished 15th, 26th and 10th at Martinsville Speedway, Homestead-Miami Speedway and Talladega.

While momentum can always play a role in how a team mentally enters the next weekend, perhaps it’s perfectly fine to not put much stock into Harvick’s second round, which was known to be the wild-card round with a superspeedway and a road course.

“The last round was definitely unique and had a lot of twists and turns as we went through all the different types of racetracks,” Harvick said on Wednesday (Oct. 14) in a Zoom with media members.

Let’s refresh our memories, then, and take a look at the three tracks of this round: Kansas Speedway, Texas Motor Speedway and Martinsville.

How did the No. 4 team perform at each track earlier this year? Fourth at Kansas, fifth at Texas and 15th at Martinsville.

Nothing about those particular runs were spectacular, and it’s true the majority of onlookers (myself included) expect more of Harvick and his No. 4 team. That’s the bar they set with 25 top-10 finishes in 32 races with an average finish of 6.9, nearly three positions better than his closest competitor Denny Hamlin.

So off the heels of his worst three races since the spring, it is fair to wonder if the level of concern heightens entering the Round of 8. Well, it would be, at least, if not for the steadiness of Harvick and crew chief Rodney Childers.

“There’s really no change for us. We’ve been here, done this,” Harvick said. “We know what’s in front of us. You go and prepare and that’s why we’ve stuck with the attitude of trying to playoff race every week. And the expectation is to go out and be competitive, and if you’re not, come home and figure out why and try to address it and move onto the next one. It’s survive and advance at this particular point.”

The level-headed approach that Harvick and Childers personify is why they have only missed the Championship 4 once in the six seasons of this iteration of the playoffs (2016). Never do they allow themselves to get flustered for long when things don’t go their way. They analyze, adjust, adapt and improve.

So it should be of no surprise that their confidence isn’t wavering on the dawn of the penultimate round of the 2020 playoffs.

“I think these racetracks are right up our alley, especially the first two,” Harvick said. “I think as you look back, the ROVAL has been a decent racetrack for us the last couple years. It was fine this weekend. […] Talladega was just Talladega, and Vegas we just missed it a little bit. I think as you line up the first two races, they’re definitely right in our wheelhouse.”

Harvick’s numbers prove he will be a threat at least at Kansas and Texas. The 20-year Cup veteran is a three-time winner at Kansas, most recently in May 2018. Perhaps more relevant, though, is his recent history at Texas, where he’s won each of the last three playoff races.

Couple that with his series-high 67 playoff points, and Harvick appears to be a lock for the Championship 4 again this year for the inaugural finale at Phoenix Raceway, entering the round 45 points above the cutline.

In the unlikely event that the lack of momentum or bad luck affects this team, Martinsville may prove pivotal. Harvick has just one career win there which came in 2011. His 15th-place effort earlier this season was his only Martinsville finish outside the top 10 in his past six races, so there is hope a solid day would advance him regardless. But trouble at Kansas and Texas could make for an interesting situation at the paperclip-shaped track.

Until then, don’t allow yourself to forget just how dominant this season has been for Harvick as he continues the pursuit of a second Cup title.