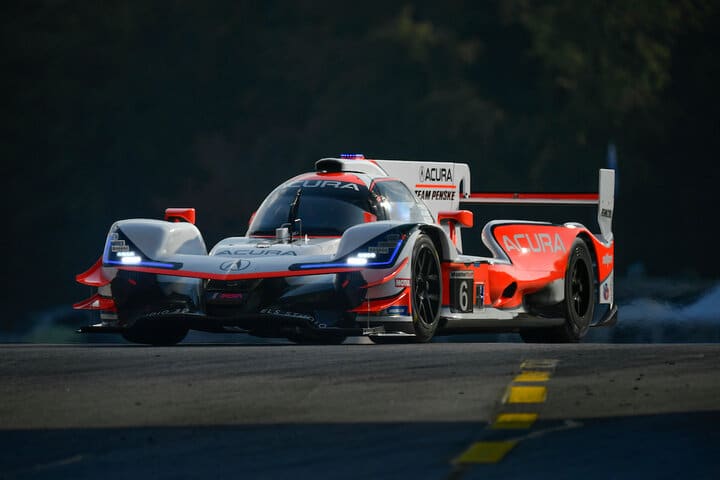 “We’re very pleased,” Cameron said after the session. “It was a big effort to get the lap. It’s a lot of risk at a pretty difficult place to get it done.We’ll have a nice view for the start and avoid the drama it caused last time around here and really looking forward to the 10 hours tomorrow.”

Cameron is referring here to the start of the TireRack.com Grand Prix last month. Action Express Racing’s Felipe Nasr turned in on him at the start, resulting in this incident:

The Prototype session was fast and furious. Nasr was fastest early on in his Cadillac, but was eventually swamped by both of the Mazdas. Both of the Penske-run Acuras overtook the Mazdas.

Cameron topped the charts, then was passed by teammate Ricky Taylor. With five minutes remaining in the session, Cameron set the time that ultimately could not be beat. It was a little less than a tenth of a second faster than Taylor. Nasr will start third in his Cadillac, followed by Mazda Motorsports’ Harry Tincknell and Wayne Taylor Racing’s Ryan Briscoe.

In GT Le Mans, the entire class qualified much faster than the pole for the TireRack.com Grand Prix last month. As has become the norm lately, the Corvettes started out immediately, joined after a couple of minutes by the Porsches. The BMWS only participated in the final five or so minutes of the session.

The 23rd running of the Motul Petit Le Mans is due to go green at approximately 12:40 p.m. ET Saturday afternoon. Live coverage begins on NBCSN at 12:30 p.m. and runs up until pre-race coverage for the Xfinity Series Kansas Lottery 300.  Coverage resumes after the Xfinity race and goes through the checkered flag.