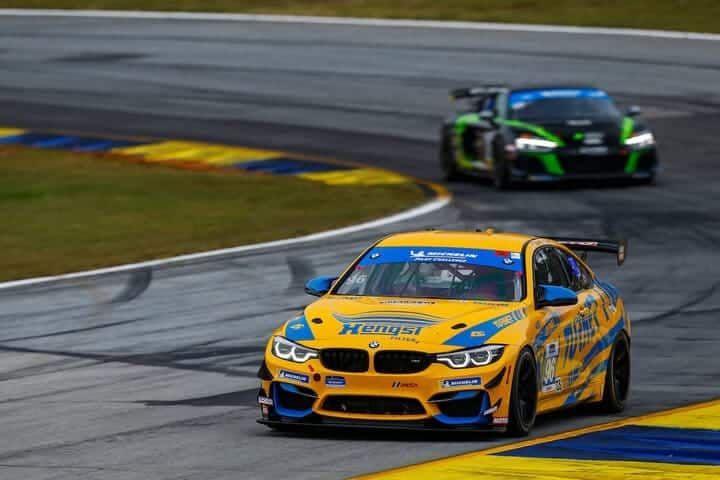 Turner Motorsport’s Robby Foley and Vin Barletta were the beneficiaries of a very ill-timed caution in Friday’s (Oct. 16) FOX Factory 120 at Michelin Raceway Road Atlanta. That caution took CarBahn Motorsports with Peregrine Racing right out of the hunt. Once out front, Foley was able to hold off the pack to take victory.

“With the caliber of [drivers] behind me, I had to be perfect,” Foley told NBC Sports in victory lane. “It all started with getting a good jump on the restart. If I could have a little space going into turn 1, [it would really help because Murillo Racing’s Eric Foss‘] Mercedes was really strong in the turns. I knew that if I was still out front by turn 5, the other guys were going to race each other hard. If I was tidy and didn’t make any mistakes, it was going to be enough [to win].”

CarBahn Motorsports with Peregrine Racing’s Tyler McQuarrie led the field to green and immediately opened up a comfortable advantage over the rest of the pack. Behind him, KohR Motorsports gained a position early, and Archangel Motorsports’ Alan Brynjolfsson showed significant early pace.

Brynjolfsson didn’t get to enjoy his new Aston Martin Vantage GT4 for long. On lap 8, Brynjolfsson and Winward Racing’s Russell Ward collided exiting the chicane. That resulted in Brynjolfsson spinning into the wall underneath the FOX Factory bridge.

The contact heavily damaged the Aston Martin and sheared off the left front wheel, which was hit by Multimatic Motorsports’ Scott Maxwell. Brynjolfsson was out on the spot but okay.  Maxwell was able to continue but ended up losing laps getting damage on the right front corner of his Ford Mustang GT4 repaired. He would eventually finish three laps down in 26th overall.

The incident resulted in a 20-minute caution as repairs had to be made to the tire barrier that protected the concrete wall. Shortly after the restart, AOA Racing’s Gino Manley ran into Roadshagger Racing’s Gavin Ernstone entering turn 7 and broke the left front corner of his car. Manley couldn’t get the car back to the pits and pulled off, bringing out a second yellow. By this point, the 40-minute minimum drive time had been met. As a result, everyone made their first pit stop of the race here.

The CarBahn Audi got out of the pits first but did not make the driver change to Jeff Westphal. This created a quandary for the team. They could only go 43 minutes on a tank of fuel due to a Balance of Performance adjustment in the week leading up to the race. That left the team an interval of only one to two laps to make their final stop of the race.

Essentially, it would work out as long as a caution didn’t come out when they needed to stop. Two minutes before McQuarrie was going to make his second and final stop, LA Honda World Racing’s Mat Pombo spun off exiting turn 1 and hit tire barrier to bring out the race’s third full course caution. That closed the pit lane. Pombo was OK, but he was very upset with the situation, angrily pointing at the left corner of his car and kicking it.

By the time the pits opened, there were under 40 minutes to go. That meant Westphal couldn’t fulfill the minimum drive time. The penalty for that is very strict: Classification at the rear of the field if you finish more than 90% of the winner’s distance. As a result, they ended up parking the car after completing 53 laps of what turned out to be 62 in order to keep themselves from finishing last. They ended up 19th in class.

“It’s a tough pill to swallow to say the least,” McQuarrie explained after the race. “The caution came out, and it changed everything. In hindsight, we should have just come in and taken a penalty, but I was unaware of it when we were out there circulating under caution.

“I’m gutted. I just drove my butt off. That’s a season ender.”

On the final restart with five laps to go, Foley got the all-important jump on Foss. A bad restart allowed BimmerWorld Racing’s Greg Liefooghe to pounce on Foss and take second while Foley got away to take the victory.

Since Foley started the No. 95 BMW, he will not get the points for the victory. Barletta will, though.

Foley and Barletta’s margin of victory was eight-tenths of a second over Liefooghe and James Clay. Rebel Rock Racing’s Frank DePew and Robin Liddell staged a rally from the rear of the class to finish third in their Camaro. Murllio Racing’s Eric Foss and Jeff Mosing were fourth, while Winward Racing’s Nico Bastian and Russell Ward were fifth.

Points leaders Kyle Marcelli and Nate Stacy finished sixth. With the aforementioned issues for the CarBahn duo, they now have a 20-point lead with two races to go. Motorsport In Action’s Corey Lewis and Sheena Monk were seventh, while PF Racing’s James Pesek and Chad McCumbee were eighth. Riley Motorsports’ Dylan Murry and Jim Cox were ninth, while Foley (in the car he started) and Bill Auberlen were 10th after a late off-course dropped the No. 95 out of the top 10.

In TCR, Atlanta Speedwerks’ Todd Lamb started from pole, but a crucial mistake from the team led to an immediate penalty.  In IMSA, teams must start the race on the tires used for qualifying. The Atlanta Speedwerks team changed the tires and didn’t notify the officials. As a result, they got busted by the RFID readers situated at pit out when the pace laps began. Lamb was thus forced to serve a drive-through penalty at the end of the first lap.

Lamb’s penalty elevated Fast MD Racing’s Max Faulkner to the lead in his Audi. He had a fleet of Hyundais behind him giving chase. After a couple of laps, points leader Ryan Norman in Bryan Herta Autosport’s No. 33 Hyundai was able to get past to take the lead.

The second caution resulted in a split strategy. Teams couldn’t really go to the finish from there, but almost everyone stopped for fuel, tires and a driver change. Lamb chose to stay out and put himself on a one-stop strategy. Teammate Cliff Brown had made a stop during the first caution and also chose to stay out.

Once the green came back out, Lamb was able to open up a three-second lead over the field, which he held until he made his one and only stop just past halfway. Meanwhile, Gabby Chaves had hard contact with Murillo Racing’s Brent Mosing, putting the No. 65 Mercedes in the grass. The contact ended up breaking a suspension part and cutting the left front tire on the No. 33 Hyundai. Chaves brought the car in for repairs, but they could not made in a reasonable time.

Chaves’ breakage put Ryan Eversley in the lead until Pombo’s crash. That brought everyone in for fuel and tires. KMW Motorsports with TMR Engineering’s Tim Lewis Jr. briefly held the lead, but was passed by Michael Lewis in the BHA No. 98 Hyundai.

Shortly after Michael made the pass, contact was made that resulted in Fast MD Racing’s James Vance sliding into the tires to bring out the final yellow of the race. During that yellow, Lewis pulled off with issues of his own.

That left Michael Lewis to fight it out with 16-year old Tyler Maxson, this year’s TC America TCR-class champion, in a similar Hyundai for Copeland Motorsports. Maxson was able to get past Michael Lewis for the lead and pulled out a slight advantage. However, Lewis was able to run Maxson back down and pass him at the chicane coming to the white flag to get the lead back.

The final lap saw the two Hyundai drivers duke it out. Maxson tried to peek to the inside coming to the finish, but Michael Lewis held on to give himself and Mason Filippi their second win of the year by half a car length over Maxson and Tyler Gonzalez.

Lamb and Brian Henderson managed to finish third with their alternate pit strategy. Harry Gottsacker and Mark Wilkins in BHA’s No. 21 Hyundai were fourth, while Eversley and Taylor Hagler ended up fifth.

Twenty-eight of the race’s 62 laps were run under caution. This meant that more than half of the race time was spent behind the safety car.

Michelin Pilot Challenge teams will take next weekend off before traveling to California for the WeatherTech Raceway Laguna Seca 120. That race is scheduled to go green at 6:35 p.m. ET on Halloween (Oct. 31) and will be streamed live on NBC Sports’ TrackPass.