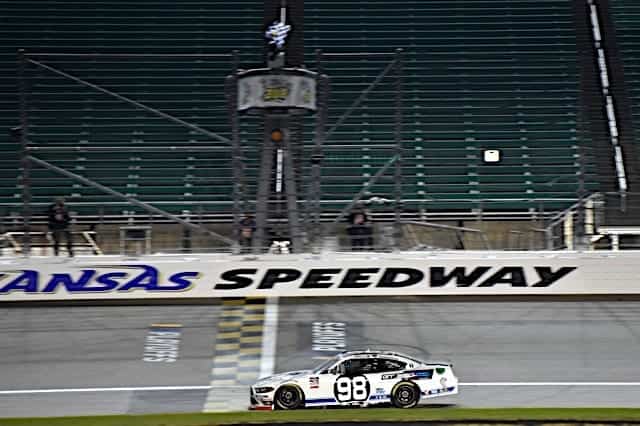 It was domination at its finest for Chase Briscoe at Kansas Speedway.

The winningest NASCAR Xfinity Series driver this season added yet another victory to his tally as he claimed the Kansas Lottery 300 checkered flag.

Briscoe’s drive was nearly perfect as he kept his No. 98 Stewart-Haas Racing Ford out front for 159 of the 200 laps contested and remained virtually unchallenged throughout the night.

With his ninth win of 2020, the Indiana native becomes the first driver to punch his ticket into the championship round.

“After all the chaos at the beginning of the race, a lot of those [playoff drivers] are going to be in scary points situations, so I’m happy we don’t have to deal with that,” Briscoe told NBCSN. “It’s crazy to win nine races. It’s been an unbelievable year.”

Briscoe was aided by several incidents throughout the night had major implications for several contenders.

However, they all paled in comparison to a frightening accident on a lap 172 restart. After racing on the apron, Justin Allgaier sent Anthony Alfredo into a slide toward the wall. The No. 21 car was then launched into the air and flipped over as he was tagged by Riley Herbst while simultaneously making heavy head-on contact with the Turn 1 wall.

Alfredo’s No. 21 Chevrolet proceeded to slide along his roof through the turn before coming to rest at the bottom of Turn 2. Safety crews managed to flip the mangled vehicle before the Connecticut native emerged unharmed.

Take a look at the incident that brought out the red flag during the final stage at @kansasspeedway.@anthonyalfredo exited the vehicle under his own power. pic.twitter.com/pUk4FmN0WU

Still, several other incidents took out many heavy-hitting playoff drivers.

On a lap 16 restart following a Matt Mills spin, Ross Chastain made a daring but successful four-wide move for the lead. As competitors scrambled for real estate, Austin Cindric and Noah Gragson made heavy contact.

Gragson was stranded on pit road with a broken upper control arm as the field roared by. Unlike Gragson, Cindric was able to return to the track and meet minimum speed despite heavy sparks trailing from his Ford. Gragson would finish last, and Cindric came home 28th, 27 laps down.

Late in the going, Alfredo triggered a crash that collected playoff campaigner Chastain that also sent Harrison Burton for a slide. Although he kept his machine righted, Chastain had to limp his Chevrolet to the finish with extensive right-side damage from wall contact.

Despite not being in the driver’s championship, Daniel Hemric‘s No. 8 Chevrolet is in the owner’s title race. But it took a big hit as Hemric pancaked the wall shortly after the Gragson and Cindric incident.

Non-playoff drivers were not immune from the carnage either. Lap 53 saw Joe Graf Jr. punt Jeffrey Earnhardt into a long slide that also collected David Starr and Kody Vanderwal.

With all the drama behind him, Briscoe easily swept the first two stages and backed up his performance in the final one.

However, the running order was only shuffled twice by two untimely cautions. The first came out during a round of green-flag pit stops for a bizarre spin and mechanical issue on Josh Reaume‘s No. 47 Chevrolet.

A big break for @RyanSiegRacing?

He stayed out longer as the leader and the #XfinitySeries caution comes out for @joshreaume. pic.twitter.com/8aUuHsyMl4

The incident involving Alfredo, Burton and Chastain shuffled Sieg to the front again as Briscoe pitted for tires.

Hemric rebounded to finish second ahead of Sieg, who pitted following a late spin by Myatt Snider. Justin Haley and Austin Hill rounded out the top five.

The series returns to action at Texas Motor Speedway for the O’Reilly Auto Parts 300 on Saturday, Oct. 24. The green flag is scheduled to drop at 4:30 p.m. ET with TV coverage on NBC.