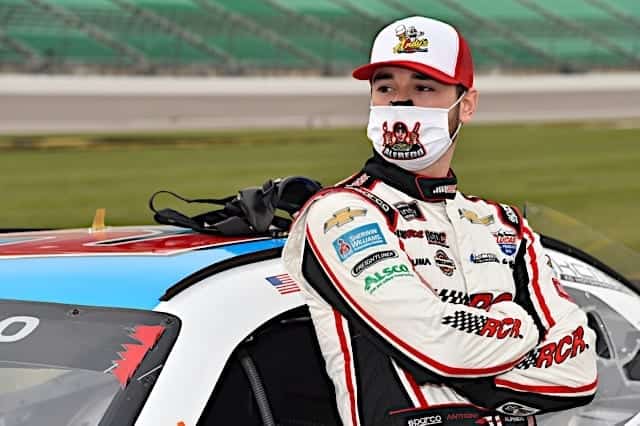 With just 28 laps remaining in the NASCAR Xfinity Series’ Kansas Lottery 300, all hell broke loose on a restart and Anthony Alfredo wound up on his lid.

The rare non-superspeedway flip occurred when Alfredo, Justin Allgaier and Brandon Brown were side-by-side near the apron heading into the first turn. Alfredo and Brown were back on the racing surface as they headed into the turn, but Allgaier was not, and the No. 7 got loose on the apron, sliding up into Alfredo and turning him towards the outside wall.

Alfredo turned across the noses of both Brown’s and Riley Herbst‘s cars, sending his No. 21 head-on into the outside wall, then into the air and on its side. With the roof against the wall, Alfredo’s car spun around on its side in a shower of sparks, slid with the wheels facing the wall and then rolled onto its roof before grinding its way down the banking.

It took safety crews a few minutes to hook the demolished Chevrolet up to a truck and roll it over, but when they did, Alfredo climbed out without issue and waved to the crowd with a double thumbs-up.

The crash ended the day for Alfredo and Herbst, while Allgaier recovered enough to finish 10th and Brown came home 13th. Chase Briscoe went on to win the race, his ninth victory of the season, locking him into the championship round at Phoenix Raceway.

Great to see @AnthonyAlfredo climbing out after that wild ride. pic.twitter.com/yFv0oPEXnh

“That was the craziest thing I’ve ever experienced,” Alfredo told NBC Sports after he was released from the infield care center. “That definitely shows you how fast things happen in racing, but I’m just glad to be okay. […] I gotta thank the NASCAR safety crew for being there immediately, before I even realized it was over – that was just racing hard.

“We had an extremely fast Chevrolet Camaro tonight… but very thankful for the safety team, our safe racecars that we have today, all the safety equipment that goes into keeping all of us drivers safe in the racecar.”

"I wish I could have flipped back over and kept digging."@AnthonyAlfredo was having a blast at @KansasSpeedway before his flip. Hear from the driver of the @RCRRacing No. 21. pic.twitter.com/JZs5evVwuu

Luckily, he could make light of the incident while watching a replay.

“That’s pretty nuts,” he said. “I’m just glad to be okay. […] This is just a little wall you got to climb over in some of the things that happen in racing. I wish I could’ve flipped back over and kept digging, because I was having a blast here tonight.

“The upside down, it’s crazy. It felt like an eternity, but I know the safety crew was working tremendously fast, I was actually able to see how they were working to get me out of there, so I just tried to relax the best I could and hang in there. It was weird, I think the worst part about it was probably all the blood rushing to your head.”

What a wild ride for @AnthonyAlfredo.

Take a look at what happened that led to the 21-year-old flipping at @KansasSpeedway. #NASCARPlayoffs pic.twitter.com/4rkn3wzmmf

Chad Boat also ended up on his roof in 2012 during an ARCA Series event, but no driver in NASCAR’s three touring series had flipped at Kansas since Kelly Sutton did in a 2005 Gander RV & Outdoors Truck Series event.

Alfredo’s crash continued a recent trend of hard crashes at the speedway, including Cup drivers Aric Almirola in 2017, William Byron in 2018 and Ryan Preece earlier this year. Preece came the closest to rolling over, suffering a violent crash into the inside retaining wall during the July race.

Alfredo’s final race will indeed be next weekend at Texas Motor Speedway. He has scored eight top-10 finishes in 18 starts this season with Richard Childress Racing, with a best finish a best outing of fourth in the first race at Homestead-Miami Speedway in June.

Kansas and Phoenix need double yellow lines! And the guts to enforce the rules!