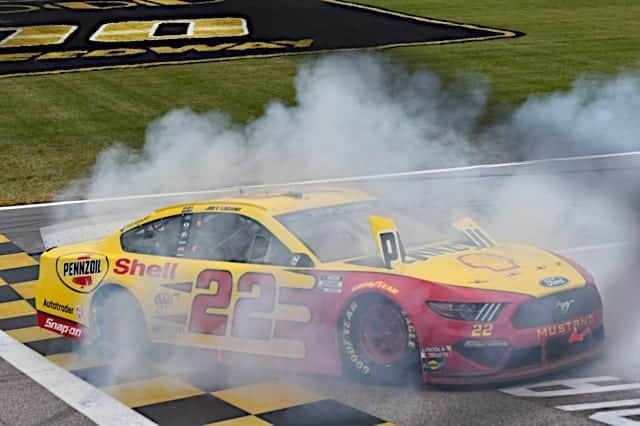 Kansas Speedway kicked off the Round of 8 for the NASCAR Cup Series on Sunday, Oct. 18 with the Hollywood Casino 400. And, despite some pointed criticism on social media, this 1.5-mile oval delivered with a strong finish between Joey Logano and Kevin Harvick for the victory.

As usual, the current NASCAR Cup Series 550-horsepower package continues to put an emphasis on clean air. It brings strategy and track position front and center; often, like in Sunday’s race, the fastest car clearly doesn’t win. Harvick falling short after leading a race-high 85 laps caused quite the uproar from the keyboard warriors on Twitter.

Why? Of course, the fastest car doesn’t always win the race, and with this package, that’s only magnified on intermediate tracks. But why is that such a bad thing? Don’t you want upsets and surprise finishes in racing? This package still leads to plenty of passing, including complete chaos on restarts. In addition, with unseasonably cold weather (temps stayed stuck in the mid-40s on race day), the leader couldn’t gap the field.

As for the NASCAR Xfinity and Gander RV & Outdoors Truck series races, those were solid at Kansas, too. Trucks in particular featured a great finish that included two GMS Racing teammates colliding (or a block gone wrong). So don’t get caught up in the tornado of negativity you might see elsewhere. The racing out in the Midwest this weekend was plenty good enough.

Let’s dig into some little-known stats from the NASCAR weekend that matter.

Prior to the COVID-19 pandemic taking over the world, Logano was setting up for a solid season. The No. 22 team won 50% of the opening four races (that’s two for you math whizzes) at two totally different racetracks with two totally different aerodynamic packages: Las Vegas Motor Speedway and Phoenix Raceway.

Let’s focus on Phoenix. Many of the elite teams looked at that race as one of the most important of the season. It’s the first time in playoff history (and the first time since 2001) the final race won’t be contested at a venue the sport visits just once per season. So we can look to recent history to see what happened out in the desert back in March.

Turns out Logano won that Phoenix race by holding off a hard-charging Harvick. Sound familiar?

On Sunday at Kansas, Logano was out to lunch for the majority of the first two stages, earning just two stage points. But a call for two tires late in the going gave the No. 22 team track position. Then, on the final restart with 42 laps remaining, he was able to skillfully block his way to the victory, beating Harvick.

Sure, Harvick by far had the better car, but dirty air was enough to keep the No. 4 Ford behind Logano, who won his first race in 224 days (Phoenix).

Like 2018, the year Logano was crowned Cup champion, he won the first race in the Round of 8 in a minor upset (Martinsville Speedway). Now, the No. 22 team, this time led by Paul Wolfe, can lay low for two weeks and focus solely on its Phoenix car.

Can lightning strike twice? Team Penske has been quite stout at races with 750-horsepower races this season, winning four times. Add it all up and the No. 22 team could be considered a championship favorite.

We are going to the #Championship4!!!! #NASCAR

Entering the 2020 season, Chase Briscoe said he needed eight wins to keep his NASCAR career alive. He achieved that three weeks ago at Las Vegas, and on Saturday (Oct. 17), he picked up his ninth win in dominating fashion.

Briscoe led 159 of 200 laps, cruising to the race victory in the Kansas Lottery 300. Even Ryan Sieg on much fresher tires wasn’t able to catch the No. 98 car, though he was third at the finish.

With the win, Briscoe is a lock for Phoenix. Even better for him, the Robin to his Batman this season – Austin Cindric – had a challenging day. Cindric was caught up in a lap 16 incident with Noah Gragson, stumbling into a 28th-place finish. The No. 22 team entered 27 points ahead of the cutline and came out just two to the good.

So no, Briscoe wasn’t necessarily a lock for Phoenix had trouble struck the No. 98 camp (he entered just 37 points above the cutline). Fortunately for him, all went according to plan, and he locked up his ninth win of the season, which is the most for a NXS regular since Sam Ard had 10 in 1983.

Heck yeah! A lot of stress gone! Ready to race for a championship! https://t.co/hI7NpHvASq

Like Logano in Cup, Briscoe’s team, led by Richard Boswell, can now focus solely on Phoenix. Both driver and crew chief noted they’d like to bring the Kansas car, as it’s won three of the four races its competed in this season.

Competition, beware. Briscoe could be in position to tie Ard’s NXS win record for a regular on his way to the championship.

Of all drivers who have come up through the ARCA ranks, there may not have ever been as much hype as there’s been put on Hailie Deegan. In Saturday’s Truck race, she got her first opportunity on the national stage.

After lining up 34th on the starting grid, Deegan made it to 25th by the end of the opening stage and was awarded the free pass for being the first truck off the lead lap. In stage two, she was slightly involved in a 10-truck pileup, receiving damage to the grille of the No. 17 truck. But over the final 100 laps, Deegan kept her nose clean and finished the afternoon in 16th, the best finish for a debuting woman in the Truck Series (Johanna Long previously held the record, finishing 17th at O’Reilly Raceway Park in 2010).

Self-admittedly, Deegan’s goal was to run all the laps, hoping for a top-15 finish. While she came up one position short of that, she gained valuable experience and even made her first ever live green flag pit stop, which her veteran crew chief, Drew Blickensderfer, coached her through.

Man what a day! Can’t wait for next year in trucks? @ford @Wastequip @monsterenergy @fordperformance pic.twitter.com/vgBMsokSld

Through all the marketing hype, Deegan must still perform. And you can’t ask much more of anyone who is making their first start in a series, nonetheless a truck.

She’ll also get a lot more experience soon. Ford Performance announced during the race she would be competing full-time in 2021 for DGR-Crosley.