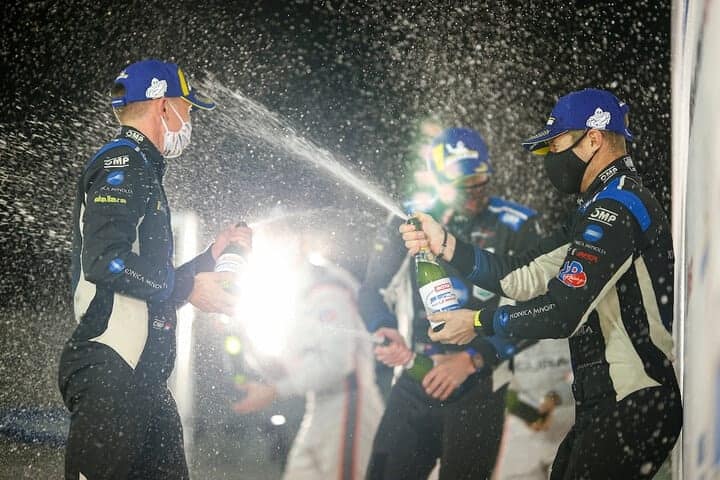 With 11 minutes to go, Taylor made the move on Derani in turn 6. Contact was made, sending Derani into the gravel while the Acura spun.

Wayne Taylor Racing’s Renger van der Zande was 12 seconds behind at the time but managed to sneak through to take the lead. Another yellow on the restart allowed the Konica Minolta-sponsored Cadillac shared by van der Zande, Scott Dixon and Ryan Briscoe to claim the overall victory under caution.

“There was one in the wall and one half on the track,” van der Zande explained afterwards. “When I came around, it was a bit tricky.  I had to go completely wide because [Ricky Taylor] was going back on track. I think he was trying to get out of the way more than anything, but I almost crashed into him.

“When I came there, obviously, it was all hallelujah. Straight into the lead and straight into the safety car. I think we had a good restart, but sometimes you have to be lucky. Today we were lucky. But on the other hand we had good speed in the car.”

Acura Team Penske’s Dane Cameron started from the pole and slowly began to pull away from the pack. Meanwhile, Mazda Motorsports’ two Mazda RT24-Ps were the quickest in the 20-minute warmup prior to the race. The No. 55 of Harry Tincknell never got to use that pace. Barely 10 minutes into the race, Tincknell had a brake rotor fail, which forced him into the garage. He would return to the race 18 laps down and out of contention.

Outside of the pits, the No. 6 Acura led roughly until the halfway point. Here, Oliver Jarvis came out of the pits and had contact with Scuderia Corsa’s Alessandro Balzan. The contact detached the nose of the Mazda and put Jarvis in the wall, significantly damaging the No. 77 Mazda. They would return after lengthy repairs in the paddock and finished 33 laps down in 15th overall.

It was at this point that Ricky Taylor assumed control of the race in his No. 7 Acura. The No. 7 Acura would trade the lead for much of the rest of the race with the Wayne Taylor Racing No. 10 Cadillac, depending on the pit sequence. The No. 31 Cadillac was never far behind.

Once Derani got in the No. 31, the battle was on. Much of the last hour of the race was a back and forth duel. With 34 minutes remaining, Derani made a daring move to the inside entering turn 1 to take the lead.

Despite the move, Derani was not able to get away from the Acura. Twenty minutes later, Ricky Taylor was able to get back to Derani, and you know what happened.

After the race, Derani was confronted by Ricky Taylor and his teammates. Effectively, they tried to blame Derani for the incident. Derani doesn’t agree with that sentiment and told NBC Sports afterwards that he had lost some respect for Ricky as a result.

Despite the late incident, Acura Team Penske’s No. 7 for Ricky Taylor, Helio Castroneves and Alexander Rossi ended up second, followed by the No. 6 of Cameron, Juan Pablo Montoya and Simon Pagenaud. Action Express Racing’s No. 5 Cadillac slipped back onto the lead lap when the collision occurred, allowing the trio of Sebastien Bourdais, Loic Duval and Tristan Vautier to finish fourth. Derani, Mike Conway and Felipe Nasr ended up two laps down in fifth.

The LMP2 class looked to be another dominant run for PR1 Mathiasen Motorsports. Things didn’t quite work out that way.

PR1 Mathiasen Motorsports’ Patrick Kelly started from the pole and proceeded to run away from the rest of the class. Within the first three hours, the team was able to stretch their advantage out to two full laps as Tower Motorsport by Starworks had John Farano complete his minimum drive-time.

Once European Le Mans Series regulars Job van Uitert and Mikkel Jensen were able to get into the car, the No. 8 ORECA 07-Gibson went up the order. Cautions allowed them to get back onto the lead lap and eventually past the No. 52.

As a result, Jensen was able to relax for the rest of the race en route to victory, the first LMP2 victories for each driver in IMSA. The margin of victory was five laps over Performance Tech Motorsports’ Matt Bell, Colin Braun and Jim McGuire. Inter Europol Competition’s Rob Hodes, Austin McCusker and Jakob Smiechowski were nine laps down in third.

In GT Le Mans, Corvette Racing’s Antonio Garcia started from the pole, but lost the advantage almost immediately to BMW Team RLL’s Connor de Phillippi. During the first yellow of the race for JDC-Miller MotorSports’ Gabriel Aubry sliding into the tires, everyone came in for their first stop. Garcia was able to regain the advantage. De Phillippi’s No. 25 BMW ended up running into a mechanical problem in the third hour that put them out of contention.

The race ultimately came down to pit strategy in the final hour. Augusto Farfus led in the No. 24 BMW until he had to make his final stop with 38 minutes to go. The No. 911 Porsche with Frederic Makowiecki at the wheel was off-sequence and had stopped 16 minutes earlier. Makowiecki was able to take the class lead while Farfus fell to fourth.

The big problem was that everyone was going at similar speeds. Farfus could not gain any positions. The Derani-Ricky Taylor crash did close everyone back up for one more run for the checkers.

On the final restart, Laurens Vanthoor in the No. 912 Porsche was able to get past Garcia to take second in class. It was looking like a Porsche GT Team one-two finish was on offer. However, Vanthoor collided with AVS Vasser Sullivan’s Townsend Bell in the Esses. Both cars spun down the hill and into the tire barriers to bring out the final caution. Both drivers were okay but unable to continue.

In GT Daytona, there were a number of teams that competed for the class victory Saturday night Meyer Shank Racing with Curb-Agajanian’s Shinya Michimi started from the pole but quickly lost his advantage to Scuderia Corsa’s Jeff Westphal. Ultimately, much of the race was a battle between these two cars, Paul Miller Racing Lamborghini and the AVS Vasser Sullivan Lexus RCF GT3s.

For Meyer Shank Racing with Curb-Agajanian, their chances at victory ended when Matt McMurry was hit first by The Heart of Racing’s Roman DeAngelis, then by a prototype. This broke a suspension part and resulted in 20 minutes of repairs.

Westphal was able to get past AVS Vasser Sullivan’s Jack Hawksworth for the class lead with 68 minutes remaining. From there, he was able to hold off the pack to give himself, Balzan and Cooper MacNeil their first win of the year. In Westphal’s case, it definitely makes up for the strategic blunder that ruined Friday’s FOX Factory 120 for him.

After the action in Michelin Raceway Road Atlanta, IMSA WeatherTech SportsCar Championship teams will take a week off.  They’ll be back in action Nov. 1 at WeatherTech Raceway Laguna Seca for the Hyundai Monterey Sports Car Championship. That race will be streamed live at 4 p.m. ET on NBCSports.com.