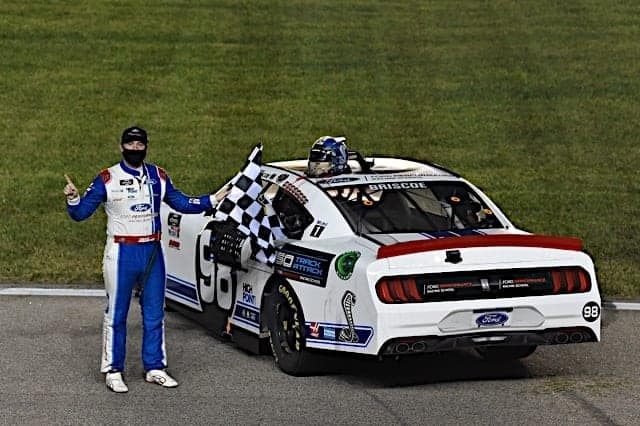 Briscoe won both stages, much like he did at Las Vegas Motor Speedway, and he led for a total of 159 laps aboard his No. 98 Ford. After others’ pit strategies forced Briscoe back on a few restarts, he still sliced his way through the pack with ease. He claimed the victory over Daniel Hemric by 1.1 seconds.

It’s his 11th career NASCAR Xfinity Series win and his series-high ninth victory of 2020. With three races left in the season, nobody can match that record.

For the seventh time in his Xfinity career, Hemric gets a runner-up finish. Ryan Sieg, Justin Haley and Austin Hill rounded out the top five.

While the night may have belonged to Briscoe and Stewart-Haas Racing, Ryan Sieg took a different route to having a successful night. His longtime crew chief, Kevin “Cowboy” Starland, kept Sieg out on the race track during a green flag pit stop cycle.

Their saving grace came via a caution by Josh Reaume’s spin in turn 4. That allowed Sieg and his No. 39 RSS Racing team to save an extra set of tires, which Sieg took before the final restart of the night. He restarted 10th and came across the finish line in third. Although Sieg sits 17 points below the cutoff line, this was a great display of out-of-the-box thinking by him and his crew.

There are still two more races for them to come up with something else exciting and maybe turn the whole playoff picture on it’s head and continue its Cinderella run.

Three playoff drivers found significant trouble in Kansas. Close racing for the lead on a lap 15 restart resulted in Noah Gragson and Austin Cindric suffering major implications. The two drivers collided coming onto the backstretch, slamming off one another before straightening back out again. Cindric was able to get his No. 22 Ford repaired and carry on in the race. He would finish 28th.

Gragson, however, failed to have his No. 9 Chevrolet repaired in time, retiring out of the race in dead last. Now Cindric, the regular season champion, sits just two points above the cutoff line, while Gragson sits 33 points below it.

In a later incident, contact with Anthony Alfredo sent Ross Chastain’s No. 10 Chevrolet into the turn 2 wall, also resulting in a reactionary spin by Harrison Burton. Chastain recovered for a 12th-place finish. But with a car that had a lot of speed and ability, Chastain can render Saturday night as a missed opportunity. He sits 12 points below the cutoff line with two races left in the round.

Quite possibly the worst-looking incident of the 2020 Xfinity season happened on a lap 172 restart. Alfredo, Justin Allgaier, and Brandon Brown all headed three wide into turn 1, with Allgaier down onto the apron. There was no time to slow down, so Allgaier shot up the track into Alfredo and Brown.

Alfredo’s No. 21 Chevrolet hit the outside wall head-on just as he was impacted in the side by Riley Herbst, which sent him on a scary upside down slide through the corner. Alfredo’s car was quickly righted, and he safely climbed out of his wrecked vehicle. It was the first Xfinity Series flip on a non-superspeedway track since Joe Nemechek’s flip at the 1.3-mile Nashville Superspeedway in 2009 (Clint Bowyer slid on his side at Dover International Speedway in 2011), and an unfortunate ending to what had been a strong performance by Alfredo.

Lost in the midst of Briscoe’s dominance was the tale of two drivers earning career-best finishes Saturday night in Kansas. Austin Hill finished third in the NASCAR Gander RV & Outdoors Truck Series event earlier in the day, and was slated to run double-duty in the MBM Motorsports (partnered with Hattori Racing Enterprises) No. 61 entry. He started 29th and patiently climbed up the running order before settling into the top 10. At the end of the night, Hill ended up with his first career top-five finish, in fifth. It’s his best finish since his ninth-place debut result at the Indianapolis Motor Speedway in 2019.

Josh Williams also threw his name into the equation when it mattered most. He started 23rd, and it took a while before Williams finally settled into his rhythm. He dodged the big pileup on lap 172, then kept his No. 92 Chevrolet in the top 10 for the remainder of the night, ultimately finishing sixth. It’s his fifth top-10 finish of the season, as well as the second time in three weeks that Williams earned a career-best result.

“Super happy to be locked into Phoenix, it’ll be a lot less stressful the next two weeks. Can’t say thank you enough to everyone at Stewart-Haas Racing.” – Chase Briscoe

Briscoe is safe from harm. His No. 98 team will have a more relieved outlook on the following two races. But the rest of the playoff picture is nothing how anyone would’ve likely imagined it. Cindric, Gragson, and Chastain faced trouble, while drivers like Sieg and Haley ended up having big nights when it looked as if they would have subpar evenings. While the first race at Texas Motor Speedway in July was rather calm, the added pressure of the playoffs could cause someone to crack under the pressure. Or worse, take out other drivers with them. It’s happened before. Could it happen to a playoff driver again?

Three races remain in the 2020 season, with two remaining in the Round of 8. The O’Reilly Auto Parts 300 at Texas Motor Speedway is scheduled for Saturday, October 24 at 4:30 pm ET. NBC Sports Network will televise the event, while PRN will cover the race on the radio.

The wreck that took out Noah Gragson and, for all intents and purposes, Austin Cindric was just a racing deal, but Gragson has been the catalyst for way to many racing deals. I like a driver that’s aggressive, but there’s smart aggressive and dumb aggressive. Noah still has a lot to learn.

Briscoe really stunk up the show. That’s what he’s supposed to do. Kudos to the #98 team.

Why are Truck Champions (Hill & Moffitt) aloud to race in Xfinity Playoffs but not Cup regulars?