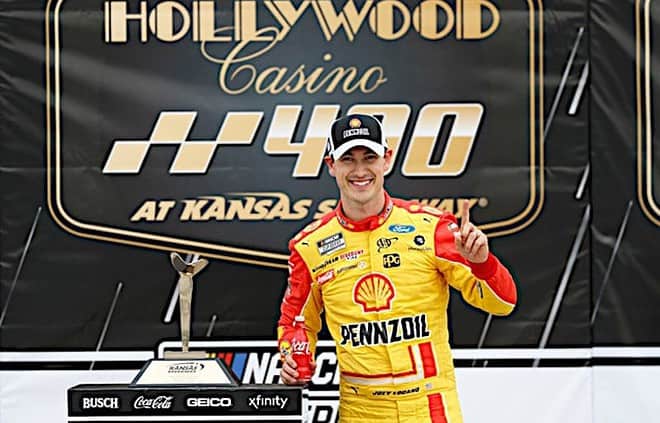 We’re getting deep into the playoffs now. All three of NASCAR’s national series started the Round of 8 last weekend at Kansas Speedway. Cup and Truck races each had different things going for them. The Trucks got a rare over-the-air broadcast while the Cup race displayed the current rules package, for better or worse.

Sunday’s race will likely be remembered best for the battle for the win between Joey Logano and Kevin Harvick. It stood out to me for a bunch of reasons, so let’s just start there.

Logano managed to beat Harvick off the pit lane during the final caution of the race. From the restart with 42 laps to go, Harvick’s goal was to get the lead back.

What viewers got coverage-wise here is much more along the lines of what you would get on one of those Hot Pass broadcasts that NBCSN has aired at Homestead in recent years. Personally, I haven’t seen any of those since I’ve been at Homestead for Frontstretch the last five years.

Viewers got a strong idea of what Team Penske and Logano were going to do to keep Harvick at bay. Since both drivers had in-car cameras, viewers got a good idea of what each move did and how slower traffic affected each driver. If you wanted to really get in-depth here, this was your broadcast.

Problem is, it was the most hyper-focused portion of a race broadcast that I can recall ever seeing that didn’t involve the late Ayrton Senna in Brazil. Aside from a quick look at Jimmie Johnson and Ryan Preece hitting the wall a couple of laps after the restart, that was all you got for 42 laps. There’s more going on out there than that. With only so many people allowed to go to these races these days and limited activation, the race broadcasts are the main way that sponsors can get anything out of the money they’re spending. Focusing to that level on two drivers (and sometimes Alex Bowman, who might as well have been the letter Y in the listing of vowels) is really to the detriment of everyone else.

Outside of the final segment, viewers got a broadcast that in general was very much designed around the playoff contenders. With only eight of them at this point of the year, there’s only so much you can do. You have to spread it out.

It is possible to cover a race and be inclusive in how you do it. Viewers don’t necessarily want a three-hour broadcast based around no more than eight cars.

Having the booth on-site is already paying dividends. They can point out things that you simply cannot do back in Charlotte. You can only see what your cameras see, and there are less of them these days. You could argue that it was a bigger deal at Charlotte with all the shenanigans going on there, but every bit helps.

Post-race coverage was fairly substantial since the race was quite a bit quicker than the July event was. Viewers got a good number of driver interviews on both NBC and NBCSN prior to the broadcast signing off at 6:30 p.m.

I go on and on about inclusiveness in these columns. It’s nothing new for me. Problem is, it’s never been more critical than it is now given the current circumstances and NBC is going out of its way to not provide that. That’s not good. It has to change. You’re hurting the sport by doing that.

I suppose you can blame the Major League Baseball playoffs for the schedule shift that was announced mere days before the race weekend got underway in Kansas. Due to the Atlanta Braves-Los Angeles Dodgers series ultimately going seven games, the ARCA race was moved up from 10 p.m. to 6 p.m. and moved from FOX Sports 2 to FOX Sports 1.

In addition, the Truck race was moved from Friday night to Saturday afternoon. Stewart Friesen missed the race because he committed to the Speed Showcase 200 at Port Royal Speedway to chase after $53,000 to win (he finished second and failed to reach paydirt). The move also allowed a last-minute change that saw the race air on FOX. Excellent.

A chance to put the series in front of a larger audience. That is if the individual affiliates chose to pick up the race. The vast majority did so, far more than with the Pro Invitational broadcasts earlier this year. I spent hours prior to the race trying to figure out if anyone was not going to air it. I only came up with two affiliates that pre-empted it based on TV listings.

One was KHMT FOX 4 out of Billings, Mont. They chose to air the 1995 NCAA Division I-AA Football Championship between Montana and Marshall instead of the game, yet still aired NASCAR RaceDay – NGROTS Edition. That was a head-scratcher. The other was KPEJ FOX 24 out of Odessa-Midland, Tex., which chose to air a movie instead of the race.

NASCAR RaceDay – NGROTS Edition started 15 minutes late due to the West Virginia-Kansas game going long. My understanding is that it was regional coverage since other affiliates that I looked up when checking to see if anyone was pre-empting the race were airing other games. I don’t know if the other ones went long.

Once RaceDay started, there wasn’t much time to do anything. They made note of the debut of Hailie Deegan, discussed a couple of topics and made their picks. That was it, basically. I feel like it would have been quite different had the football game not gone long.

As for Deegan, Ford Performance effectively announced her Truck campaign for 2021 during the stage one break in a short video and a cut to the rear of her truck, which read “#TruckinInto2021.” Literally five minutes after that aired, the official press release from Ford Performance was sent to my inbox.

Early on, she didn’t get all that much coverage. Then came the aforementioned announcement. From that point on, she got more and more coverage. For what it’s worth, I thought that she did well Saturday. For the most part, she kept herself out of the trouble (the exception being when she ran in the back of Dawson Cram while trying to avoid the Tyler Ankrum–Tanner Gray–Raphael Lessard wreck). 16th isn’t terrible for a debut. Let’s see what she took from her first Truck race and see what happens going forward.

Speaking of that wreck, Ankrum stated during his post-crash interview with Alan Cavanna that “Ralphie’s been out of control all day.” Viewers didn’t see much of Lessard prior to the crash. Therefore, we didn’t have much of a frame of reference for what Ankrum was talking about.

Overall, viewers got a pretty good race. It was dominated by GMS Racing, but they’re not exactly the kind of team to instill team orders and not allow their drivers to race each other. This is a team partially run by Spencer Gallagher, a man who proclaimed in victory lane after his one victory in the Xfinity Series that he was “going to party like it’s 1999!”

Viewers ended up with an excellent duel for the win between Brett Moffitt and Zane Smith. Unfortunately, it ended in tears as contact sent Smith into the paved runoff and eventually around. Smith still managed to finish 11th, but I doubt the Gallaghers were all that pleased about that.

Post-race coverage was relatively brief since the race ended right at the end of the two-hour time slot. Viewers got a couple of interviews (including with Deegan) and a check of the points standings before leaving Kansas for live PBA Bowling.

Overall, viewers got some decent racing. Those who tuned in since the race was on FOX instead of FS1 likely were satisfied with their decision. Going forward, how FS1 is going to cover Deegan will be something I have to cover with a fair amount of detail. She got a decent amount of coverage Saturday, likely more than most other drivers that finish 16th on debut. Are they going to fawn over Deegan or treat her like any other up-and-coming driver?

Next week is another NASCAR tripleheader, this time at Texas Motor Speedway. Meanwhile, Formula 1 makes its first visit to Portugal since 1996. This time, it’ll be at the Algarve International Circuit in Portimao. TV listings are in the TV tab above.

For next week’s edition of Couch Potato Tuesday here on Frontstretch, we’ll cover the Cup and Xfinity races from Texas. The Critic’s Annex in the Frontstretch Newsletter will cover Saturday night’s Kansas Lottery 300 for the Xfinity Series.

Phil Allaway has three primary roles at Frontstretch. He's the manager of the site's FREE e-mail newsletter that publishes Monday-Friday and occasionally on weekends. He keeps TV broadcasters honest with weekly editions of Couch Potato Tuesday and serves as the site's Sports Car racing editor. Outside of Frontstretch, Phil is the press officer for Lebanon Valley Speedway in West Lebanon, N.Y. He covers all the action on the high-banked dirt track from regular DIRTcar Modified racing to occasional visits from touring series such as Tony Stewart's Arctic Cat All Star Circuit of Champions.
Previous 5 Points to Ponder: Opportunity Knocks
Next 2020 NASCAR Silly Season: Making Sense Of Manic Monday