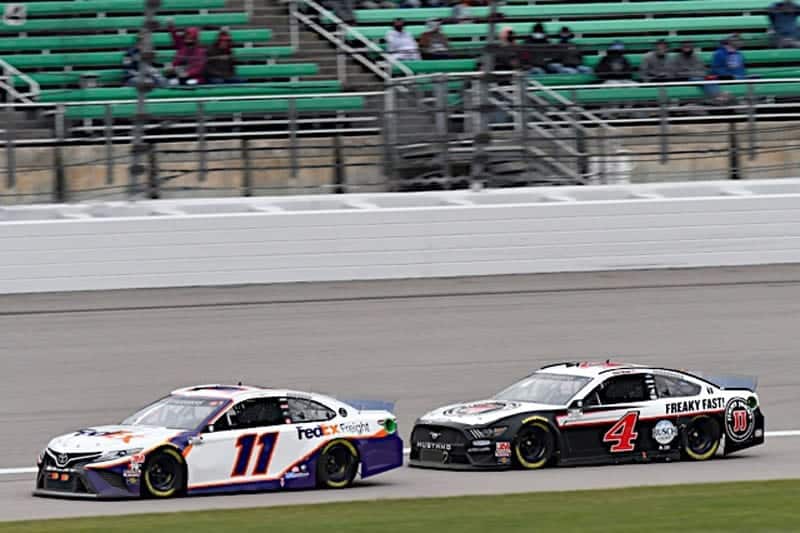 Who… should you be talking about after the Hollywood Casino 400?

Joey Logano might not have had the best car at Kansas Speedway, but he took the advantage of track position in Sunday’s (Oct. 18) Hollywood Casino 400. Logano used lapped traffic and clean air to his advantage to lock himself into the NASCAR Cup Series Championship 4 in three weeks. Logano held off a hard-charging Kevin Harvick, lap after lap, with Harvick ready to pounce on any opportunity.

However, Logano won the race because he didn’t make any mistakes. It’s his first win since March, before the COVID-19 pandemic hit, and guess where that came? Phoenix Raceway. Yeah, that Phoenix, where the title race is going to be. Logano hasn’t been in the championship conversation much, but he inserted himself Sunday.

He might be out of title contention, yet reigning champion Kyle Busch still fought hard on Sunday. Busch led a handful of laps, scored a few stage points, and finished a respectable fifth, the top non-title contender on the day. There is nothing Busch would love more than to spoil the party for those who would like to take his place at the top with a win. Once again, he performed just well enough to keep hope alive he’ll snag a victory before the season is out.

What… was the hidden gem in the Hollywood Casino 400?

Whether or not stage racing has any real effect on the outcome of most races on ovals is up for debate. That said, it has given drivers something to race for early in events. On Sunday, the two top title contenders put on a show for the single playoff point the stage win would dole out.

Denny Hamlin had the lead, Harvick wanted it, and the pair reminded everyone why they’ve been the best this year as they tried to get it. The battle was as well-contested as the one for the win. In many ways, it was symbolic of what the 2020 season has been: the year of Harvick and Hamlin dueling it out, week after week.

Those laps should also be a preview of what’s to come at Phoenix. If they aren’t, it will certainly seem like somehow, 2020 cheated race fans out of one final round between two heavyweights who stood far above the rest.

Where… were the other key players at the end of the Hollywood Casino 400?

Pole sitter Chase Elliott won stage one and led a total of 47 laps. However, he couldn’t quite find the magic from a week ago at the Charlotte Motor Speedway ROVAL. Elliott had a good car, just not a great one when he needed it in the closing laps. He fell just short of a top-five result and settled into sixth with five laps remaining. Elliott now leaves Kansas below the cutline for the Championship 4 at Phoenix but remains within striking distance.

Cup point leader Harvick had the fastest car for much of the race, including the second half and especially in the closing laps.  What he didn’t have when it mattered was track position. Despite making run after run at Logano, clearly with more speed, Logano was able to take advantage of clean air. Time and again, he blocked every move and deftly maneuvered his line up front. It wasn’t that Logano had the best car; he had the best air. Harvick had to settle for second, although he still made a statement he’s one of the drivers to beat at Phoenix.

Summer Kansas race winner Hamlin took stage two and looked like he’d challenge Harvick for the win. He might have been a threat to Logano at the end, but a bout with the outside wall and the trip to pit road it forced proved too much for Hamlin to overcome. He did get back onto the lead lap and raced back up to 15th, but like Harvick, Hamlin made a statement he’s still a driver to reckon with.

Rookie of the Year Cole Custer has done what a rookie should be doing for most of this year by running solid races and learning. He even added a little icing to the cake with his win at Kentucky Speedway earlier this year. While expectations of young drivers have skyrocketed in recent years, Custer continues to have a very good season. He finished 14th on Sunday and remains in position for a top-15 points finish.

When… was the moment of truth in the Hollywood Casino 400?

Was it a good race, or was it a terrible race? Opinions from fans were divided after the checkered flag. On one hand, there were some good battles, particularly the Hamlin-Harvick duel. On the other hand, that action might have been even better if a faster car could actually make a pass on the leader in clean air.

There were comers and goers, an authentic, uncontrived race with passing to be had throughout the field. That included some four-wide action and plenty of jostling for position. But at the front, where it mattered the most, Harvick couldn’t pass down the stretch.

It was Schrödinger’s Race; both exciting and a letdown. We saw a fierce battle for the win but were denied a real fight to the checkers. Logano didn’t run away, and Harvick couldn’t get a real run. However, if he had been able to make the move, Harvick would likely have opened up a lead on Logano plus a hard-charging Alex Bowman to make the ending much less interesting.

Such is the nature of the beast.

This could be the week where the final big questions are answered in NASCAR Silly Season. Kyle Larson has officially applied for reinstatement after his roughly six-month suspension. That would clear the way for him to sign on with a top-tier organization for 2021. He’s been heavily rumored to be headed to Hendrick Motorsports and the now-open No. 88. But could he buck that talk and slide into the newly vacated No. 14 at Stewart-Haas Racing instead?

While it’s likely NASCAR Xfinity Series standout Chase Briscoe who will get that call, it seems as though that would have been announced immediately after Clint Bowyer declared his exit. Consider Tony Stewart is more likely than Rick Hendrick to let Larson continue his extracurricular sprint car racing uninhibited. Also, 2021 is a tricky season for rookie candidates because they will have to learn a new Cup car twice. As soon as they get adjusted next season, the next-generation car will debut in 2022. Team Penske has delayed moving up Austin Cindric, in part, for that reason.

With Aric Almirola’s contract up next year, giving Briscoe another year in Xfinity and setting up a strong rookie battle in 2022 could make sense. It would also clear the way for a late bid for Larson at the same time.

Meanwhile, Erik Jones is reportedly in talks with Richard Petty Motorsports to replace Bubba Wallace. Should Jones sign at RPM and Briscoe get promoted, with Larson taking the Hendrick ride, that wraps up the biggest question marks for 2021.

If one of those pieces doesn’t fit, it will open new parts of the puzzle. But I look for the finishing touches to be put on next season this week.

How… does Logano’s win change the playoff picture?

Logano was on somewhat shaky ground for the championship, without a win since before the pandemic changed the rules and with little real momentum to speak of. Now, he can spend two weeks preparing for a second title run, and he’s the most recent Phoenix winner. That makes him more of a threat than he looks at first glance.

On the other hand, it’s still hard to imagine Logano being able to take on Harvick, Hamlin plus teammate Brad Keselowski and coming out on top if all is equal. He just hasn’t shown the strength. If those are the Championship 4, he’s still an underdog, though an underdog with that Phoenix victory as the ace up his sleeve.

But what if those aren’t the four running for the title? Should two other playoff drivers win at Texas Motor Speedway and Martinsville Speedway, either Hamlin or Harvick would be shut out. If that happens, Logano’s stock goes up somewhat against Chase Elliott or Martin Truex Jr., who have both been inconsistent this season. He’d be a clear favorite over Kurt Busch or Bowman, in theory leaving him in a better spot.

Where… was Keselowski’s pit crew yesterday? He lost spots every single time he pitted. That won’t win a championship.

Here’s a question? How come NASCAR doesn’t stop the interview and make the interviewee adjust his mask above his nose? But they can fine a work shop for not following pandemic guidelines.