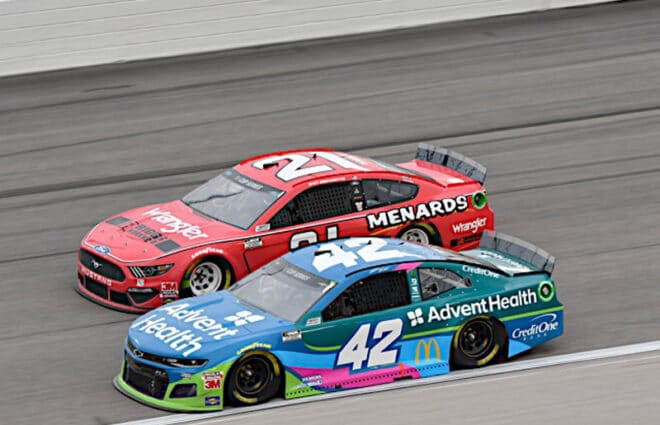 Back in the spring of 2020, as the COVID-19 pandemic began to heat up, Chip Ganassi Racing had a mess on its hands.  While participating in an iRacing event on Easter Sunday, Kyle Larson uttered a racial slur over what he thought was a private communication line.  Unfortunately for him, the line wasn’t private.  Within the next 24 hours, Larson’s major sponsors had denounced him and he was suspended by NASCAR.  The following day, CGR fired him.

Larson’s run of six seasons and four races with CGR often felt like a microcosm of the whole organization’s performance.  A number of times, he appeared on the doorstep of rising from an occasional winner to one of NASCAR’s biggest stars.  Yet, for as much potential as Larson showed, he struggled to close races and earn consistently great results.  His daredevil style and admirable car control earned him a lot of praise. But the No. 42 team never came close to a championship while Larson was driving.

That has been the story of CGR since Larson moved to the Cup Series in 2014.  After a flurry of mergers and personnel turnover early in the decade, a leaner and meaner Ganassi team with Larson and a revitalized Jamie McMurray began to pull the organization out of the doldrums.  Both drivers became regular postseason participants and, for awhile, it looked as if CGR might be recapturing its magic from the early 2000s.  Back then, Sterling Marlin nearly captured the 2002 title before a neck injury at Kansas Speedway shortened his season that fall.

However, like Larson himself, the team was unable to consistently challenge the truly elite organizations of NASCAR. Recall Larson’s 2017 season and how his playoff run ended.  After winning four races in the regular season, he looked like one of the top-tier favorites to win the championship.  But when the No. 42 blew a motor at Kansas, he was eliminated in the Round of 12.  CGR’s best chance to win a title in over a decade went up in smoke.

Fast forward to this year and Larson’s moment of ignorance put the whole team in a serious bind.  For two weeks, speculation ran rampant about who would replace him until Ganassi revealed Matt Kenseth would take over the No. 42.  Bringing Kenseth on was a surprise, but it made sense on paper.  Kenseth has a long-standing reputation as a good team builder and someone who could smooth over any lingering sponsor tensions.  Pairing him with former teammate and old buddy Kurt Busch was a great move as well.  Busch, who replaced McMurray in 2019, now had a chance to become CGR’s top title threat.

In short, Chip Ganassi Racing was set up to have a great year in 2020, even after Larson’s ouster.  Instead, with three races to go, it is clear that not even the sublime talents of Busch and Kenseth can fix CGR’s issues.  The organization has completely wasted all the potential it had for a great year.

Busch, to his credit, has enjoyed a good playoff run.  Few would have expected the No. 1 team to advance to the Round of 8.  But, just like Larson three years ago, a blown engine at Kansas will probably take Busch out of title contention.  Busch does have the luxury of two races left in the Round of 8 to earn a win and automatically advance to the final round of the playoffs.

However, it is hard to see him getting another chance.  While Busch played the ending of the Cup Series race at Las Vegas Motor Speedway brilliantly a few weeks ago, a strategy play by crew chief Matt McCall was what got him to the front of the pack in the first place.  Note also that the No. 1 team tried a similar strategy at Richmond Raceway two weeks earlier that completely backfired. In fact, it probably cost Busch a top-10 finish.  With only 142 laps led this season, it almost feels like Busch was able to win in spite of his team, not because of them.

As for Kenseth, his 2020 comeback has been an absolute mess.  It feels as if something has gone wrong with the No. 42 team every single week, often simple mistakes that a professional race team should not constantly make.  From slow pit stops, to loose wheels, to ill-handling cars, to inexplicable mechanical failures, Kenseth has rarely had a chance to compete this year without his team getting in the way.  The most baffling miscue of the season came in Sunday’s race when Kenseth veered into Erik Jones for no apparent reason, wrecking both cars.  A simple “not clear” from the No. 42’s spotter could have easily prevented the whole thing.

Kenseth has made his share of errors this year, too, and the lack of practice time may have hampered his comeback after years of sitting on the sidelines. Yet there is ample evidence to suggest the struggles of the No. 42 this year are not his fault.  Remember that Kenseth nearly won at Indianapolis Motor Speedway in July, the one time this year where he actually had a fast car.  At other tracks, namely Darlington Raceway, Bristol Motor Speedway and Pocono Raceway, Kenseth was able to put up decent results.  If the driver is the problem with the No. 42, why are all of Kenseth’s best results this season at difficult tracks where patience and experience matter most?

It seems odd that a driver with a track record of making teams better could struggle so much unless the team around him has some serious flaws to address.  When Kenseth went back to Roush Fenway Racing in 2018, that organization was clearly worse off than CGR is this year.  Yet by the end of the season, he was looking much more competitive.

In 2020, Kenseth has run about twice as many races as he did with RFR two years ago, but the cars haven’t gotten any faster.  How is it that the 2003 Cup champion, before crashing on Sunday, was struggling to run in the top 25 at one of his best tracks?  (He’s won twice in his career at Kansas). Has a lack of practice time really hurt the No. 42 team that much?

Suffice it to say Sunday’s race was the low point of the year for CGR, even including the Larson incident.  The team will now move forward with Ross Chastain in 2021 and have Busch for at least one more season.  In a few years, CGR will have two younger drivers and the Busch/Kenseth combo will be a distant memory.

It’s a shame because given the importance of veteran experience in the Cup Series, Kenseth and Busch could have been the ones to finally take CGR to the next level.  But judging by its performance this year, the No. 42 team seemingly threw in the towel about five seconds after Larson keyed up his microphone.  Hopefully, what little chance Busch still has at the championship doesn’t go to waste as well.

Bryan began writing for Frontstretch in 2016. He has penned Up to Speed for the past three years. A lifelong fan of racing, Bryan is a published author and aspiring motorsports historian. He is a native of Columbus, Ohio and currently resides in Southwest Florida.
Previous The Big 6: Questions Answered After the 2020 Hollywood Casino 400
Next Thinkin’ Out Loud: 2020 Hollywood Casino 400 at Kansas