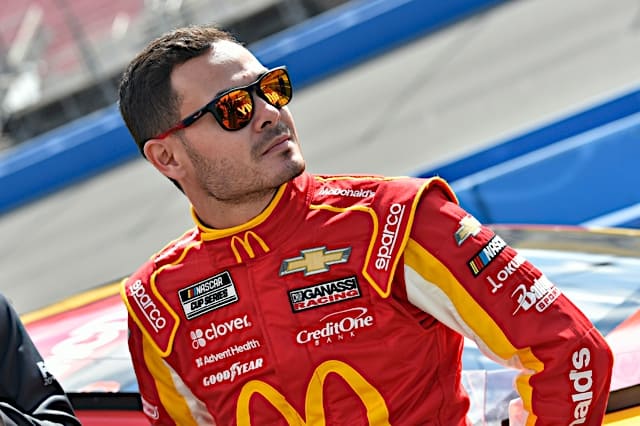 October 19, 2020 was Manic Monday for NASCAR Silly Season. In the course of 12 hours, four major driver announcements connected most of the final puzzle pieces in the 2021 Cup Series garage. Rarely do we see so much news drop in such a short period of time.

Let’s take a closer look at each move and what it means for everyone involved.

Haley, contending for the NASCAR Xfinity Series championship, was rumored to a few different Cup Series teams. After all, let’s not forget, this 21-year-old is already a Cup winner. That’s something hotshot prospects like Bubba Wallace, Matt DiBenedetto, Christopher Bell and Tyler Reddick can’t say.

Haley’s victory with undermanned Spire Motorsports at Daytona International Speedway last July is the biggest upset in NASCAR this century. It’s not even close; that organization hasn’t so much as sniffed a top-10 finish since. Haley was running just his third Cup race and has a grand total of five starts in the series.

The young talent could have signed with Spire and drove around in 35th for a year until the NextGen car comes in 2022. That’s when the team, expanding to two cars next season, supposedly plans to spend serious money to compete.

Haley didn’t want to take that risk. Sticking with Kaulig means another shot at a NXS title without some of this year’s top contenders. He could have an explosive 2021 similar to Chase Briscoe’s nine wins (more on him in a minute) and raise his stock for other available Cup rides.

There’s a benefit, too, to sticking with what you know rather than learning a Cup car… only to relearn it all over again with a brand new chassis the following year. There’s also a good chance now Haley will move up with Kaulig, who’s made it clear his plans include a full-time Cup Series team in 2022.

WHO LOSES OUT: A prospect in NASCAR’s lower series who could have moved up into one of the best independent NXS rides on the circuit. Kaulig’s done it the right way, going from five top-10 finishes as a single-car team in 2016 to a three-car powerhouse with five wins in 2020. Who fills Kaulig’s second car, vacated by Ross Chastain at the end of the season, will depend on if AJ Allmendinger decides to go full-time in 2021. The goal is to make the third car full-time as well.

GRADING THIS MOVE: B+. Kaulig’s a fresh face NASCAR badly needs with an aging group of top-tier Cup owners. Haley’s the promising talent that could take him there.

It’s surprising this news took eight days to break after Bowyer’s retirement announcement at Charlotte Motor Speedway’s ROVAL last weekend. Some were beginning to wonder if Briscoe would get the promotion after all despite those nine Xfinity wins, the most for a series regular since Sam Ard in 1983.

In the end, Ford and Stewart-Haas Racing recognized that Briscoe earned this opportunity. He’ll forever be known for calling his shot before the season, saying eight wins were needed for that Cup promotion.

“I feel like this is my make-or-break year,” Briscoe told The Athletic back in February. “If I go win eight or so races, then I feel like it shows I’m ready for Sunday. If I only win one or two races, I’m probably out the door and not racing anymore.”

Well, Briscoe went out and won nine. He did it with a single-car team and after winning just one race each of his previous two years in the series. There’s still three races left to add to that total and a potential championship to win before 2020 is over.

The reward is Tony Stewart’s old No. 14 Cup Ford, a perennial playoff contender that has a history of winning races. Briscoe’s new teammate, Kevin Harvick, has nine wins of his own at the sport’s top level and is a favorite to win the 2020 title.

There will be challenges, though. Briscoe is attempting the very thing Haley and fellow NXS rival Austin Cindric won’t do: learning a Cup car in 2021 before unlearning it in 2022 with the NextGen chassis. He doesn’t even have a single Cup start on his resume. And Bowyer, with just two top-five finishes in 2020, is arguably leaving the team in slightly worse shape than, say, Kurt Busch left the No. 41.

But the upside for Briscoe is substantial. With Harvick, at age 45, likely racing just three more seasons, could this be his heir apparent?

WHO WINS: Stewart-Haas Racing. In the course of two years, it went from no 20-something drivers to two of them, signed up for the long-term, in Briscoe and Custer. They got younger quickly with talent capable of winning.

WHO LOSES: Kyle Larson. This signing closes the door, it seems, on any potential partnership with Larson and SHR for 2021. Tony Stewart has made it clear how badly he wanted to do a deal; no one would have been more accommodating with Larson’s dirt schedule. On paper, this felt like a better fit but the timing apparently just wasn’t right.

GRADE: A-. Briscoe is the real deal. There’s a learning curve here… but it should be worth it.

Larson’s reinstatement, effective January 1, 2021, is the last hurdle remaining for a return to the Cup Series. It completes a six-month rehabilitation from a racial slur uttered in public that shattered his life, caused a NASCAR suspension and got him fired at Chip Ganassi Racing.

Time will tell whether the 28-year-old has learned a lesson. Early indications are that he’s done the apology tour right, completing required NASCAR sensitivity training while penning an essay explaining his journey. The Urban Youth Racing School in Philadelphia, where Larson spent much of his time this summer, has sung his praises along with others, like NASCAR Diversity guru Max Siegel. The narrative and the court of popular opinion seems to have shifted toward a second chance.

But he won’t get off scot-free. Reinstatement terms included speaking engagements over the next three years where Larson will share his story and what he’s learned with up-and-coming racers. Mentorship will also continue at UYRS, Rev Racing and other diversity initiatives where this mistake could turn into a teaching moment.

Where do we go from here? Unlike other drivers Monday, no ride was paired with Larson’s announcement. But you don’t need Scooby Doo and the Mystery Machine to figure this one out. Just a single top-tier ride remains open for next season: the No. 88 of Hendrick Motorsports. Alex Bowman is moving to the No. 48, replacing the retiring Jimmie Johnson, which opens up a car that’s based largely on manufacturer support.

Will the very car company that dumped Larson, Chevrolet, take him back with open arms? Just take a look at what they said to CBS Sports’ Matthew Mayer.

Statement from a Chevrolet spokesperson regarding Kyle Larson:

“Chevrolet fully supports NASCAR’s efforts to provide an inclusive environment for all race fans. Since Kyle Larson has met the criteria set forth for his return to the series, we support NASCAR’s decision.”

“Since Kyle Larson has met the criteria set forth for his return to the series, we support NASCAR’s decision.” Feels like tensions are pretty cooled off. Money and talent will do that.

WHO WINS: Larson. I’m of the mindset that people deserve a second chance and, as I wrote in April, this best-case recovery could become a best-case scenario for him. The irony is people felt Larson was headed to HMS, the top candidate to replace Johnson before this incident blew up that deal.

I never felt HMS would be on the table after that considering its reputation for clean-cut, drama-free drivers without baggage. But I was wrong. If that deal gets done, Larson’s checkered past would make him the most aggressive hire for the organization since Tim Richmond in the mid-1980s.

WHO LOSES: SHR, for reasons described above. But let’s not forget the World of Outlaws. Another year banned from NASCAR could have given that series a superstar with pull. As memories of the issue faded, Larson could have packed stands in a post-COVID era while bringing dirt racing back to national prominence.

GRADE: INCOMPLETE. I’ll pair that with a “S”… as in, “should have never happened in the first place.”

Jones capped this quartet of announcements with his decision to pair up with RPM next season. He’ll replace Bubba Wallace in the No. 43 Chevrolet for 2021 after three seasons with Joe Gibbs Racing.

It’s the equivalent of switching from the Hilton over to a souped-up Motel 6. To make matters worse, Wallace didn’t leave the light on for Jones. Gone will be multi-million dollar sponsorships like DoorDash, the Cash App and more which will move to Wallace’s new digs with Toyota and Michael Jordan.

It’s a tough pill for Jones to swallow. He narrowly missed the NASCAR playoffs in 2020 and continues to have decent chemistry with his No. 20 Toyota team down the stretch (five top-10 finishes in seven races). His new No. 43 team, by comparison, has racked up five top-10 finishes over an entire season.

That said, Jones is motivated and he’s pairing with an organization that’s made steady improvement. Their association with Richard Childress Racing has paid dividends; RCR won at Texas Motor Speedway with Austin Dillon and came close to a second with promising rookie Tyler Reddick. Another year with the same car, paired with limited rule changes, should keep the good times rolling.

The question will simply be how much money remains and whether it’s enough to keep Jones competitive enough to be a playoff contender.

WHO WON: RPM. Jones was the best talent option that fell to them when the game of musical chairs shut Jones out of several rides he was up for: Chip Ganassi Racing and Hendrick Motorsports, among others. There’s a reason Joe Gibbs Racing plucked Jones as a top prospect four years ago. He’s got what it takes.

WHO LOST: Ty Dillon. This ride seemed a good landing spot for Childress’ grandson after his current team, Germain Racing, announced it’s folding at the end of 2020. Now, it seems Dillon is destined for a step back into the Xfinity Series unless he’s willing to run 30th or worse every week with a backmarker program.

GRADE: A for RPM. D+ for Jones. How quickly a prospect can fall these days where patience in NASCAR is not a virtue.

The author of Bowles-Eye View (Mondays) and Did You Notice? (Wednesdays) Tom spends his time overseeing Frontstretch’s 30 staff members as its majority owner. Based in Philadelphia, Bowles is a two-time Emmy winner in NASCAR television and has worked in racing production with FOX, TNT, and ESPN while appearing on-air for SIRIUS XM Radio and FOX Sports 1's former show, the Crowd Goes Wild.
@NASCARBowles
Previous Couch Potato Tuesday: NBC Made the Hollywood Casino 400 the Joey & Kevin Show
Next Beside the Rising Tide: An Open Letter to Michael Jordan