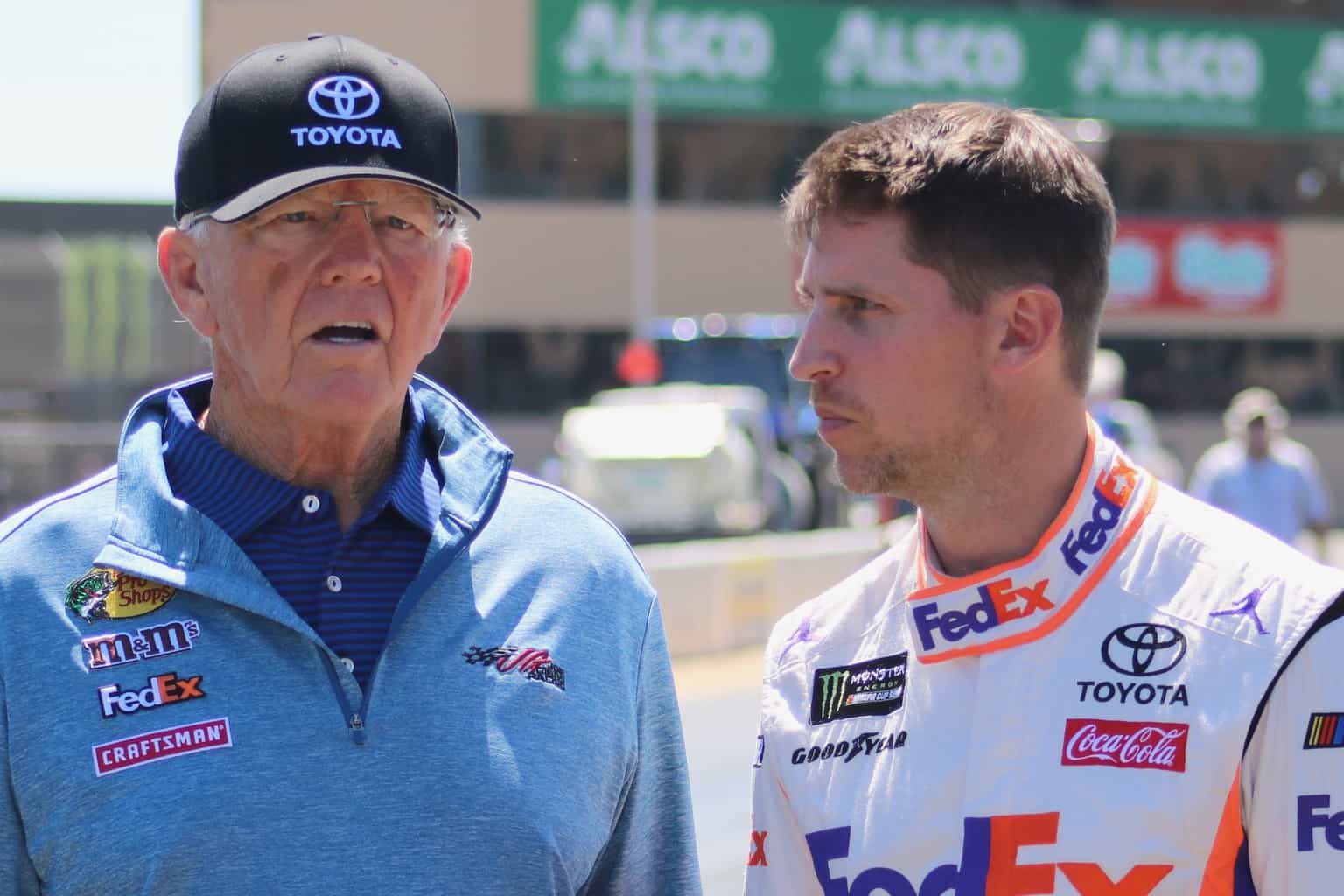 Firstly, welcome to the sport of NASCAR racing as a team owner. I am genuinely thrilled to have a person of your stature and instant name recognition decide to throw your lot in with us. I understand you’ve been a fan of stock car racing since your childhood. I never knew that about you. Before I make the first of likely a string of gaffes in this column, let me admit right up front I have never been a big fan of basketball.

Don’t take that personally. I don’t care much for any stick-and-ball sport. When the TV says there are five minutes left to play in a game and the event drags on another half-hour or more due to timeouts, fouls and official reviews I get bored. Baseball is even worse. There’s no limit to how long a game can drag on though there’s a limit how long I can stay awake watching it. No peanuts or Cracker Jacks in this old guy’s pantry.

Of course, NASCAR has been testing my patience a lot lately with this damned stage racing. They cause what amounts to NASCAR’s high-horsepower version of timeouts that destroy the natural ebb and flow of the event. Knowing when at least two yellow flags are going to fly (three if there’s a scheduled competition caution, which there almost always is as of late) also alters how races play out… and not in a good way.

So getting back to the topic at hand (I have a special challenge in this department. My sister calls it non-linear thinking. My brother-in-law just says I fell out of the top of stupid tree and hit every branch on the way down.) Focus, Matt, focus.

While I watched very few basketball games you played, I have a generally positive attitude about you as a person. I believe most people do whether they are fans of hoops or not. I know corporate America has embraced you unreservedly and has since the days you were winning titles with the Chicago Bulls. I was managing a tire store in that era and I recall several years when a brand new pair of Air Jordan sneakers was a must-have fashion statement for a lot of my employees. They’d come in late on a Saturday because they’d slept in a mall parking lot the previous evening hoping to grab up a pair of those unobtainable sneaks when Foot Locker opened. Once again, I got to admit I never had a pair. White sneakers working in a tire store just doesn’t work, plus I needed steel tips for protection. I had my pair of Timberland Iditarods, which were also quite trendy in that era and very expensive, but they kept my feet warm and dry. That’s half the battle working in an establishment where the garage doors open and close 14 hours a day and sometimes your breath freezes on your mustache.

So anyway, welcome to the sport of NASCAR racing and thanks for deciding to participate in our reindeer games. I know this deal came together awfully quickly, so it’s only natural that some details aren’t settled yet. For instance, what’s the name of the team? My guess is that NASCAR would prefer the team name not include any mention of the surname Hamlin. They’ve always been a bit jumpy about a driver competing for one team and owning a different one. You pretty much had to be Dale Earnhardt to get away with that. Do you have any cars in the shop yet? Hellfire, do you have a shop yet? I hear the Mooresville area is lovely. If you do have cars, are they brand spanking new ones or castaways out of Joe Gibbs Racing’s stables?

Your timing is a bit awkward, making your entrance in 2021 with some aspects of the new cars and new schedule being phased in. My guess is that your team will be running Toyotas. That’s a little awkward in that I believe your very first big endorsement deal was with the Chicagoland Chevrolet dealers. Oops. You might want to seek speedy delivery of that new Corvette if they promised you one. Have you even picked a car number yet? May I humbly suggest the No. 34? That’s the car number typically run by Wendell Scott, a pioneering Black driver/team owner from back in the early 1960s. How about a sponsor? I’m hearing it will be McDonald’s and Coke, which are pretty much joined at the hip anyway. Both have long histories with NASCAR and can support a high-dollar marketing program like this new team of yours. Care to confirm or deny those rumors?

So you have a bit of catching up to do, but I am confident you and your people can handle things. It’s only recently I read something you said about the venture that worried me a good deal. Yahoo Sports quoted you as saying, “My biggest conversation to Denny was, ‘Look, I don’t want to get in there to just go around the races and just go around and around and around and finish up 18th, 19th, 20th, 30th…’ I want to win. I want to be put in a position for the best chance for us to win. That’s my competitive nature. That’s always been who I am.”

Let’s keep our expectations realistic here. Even your buddy Joe Gibbs (also wealthy and famous from another sport) didn’t win a Cup race in his first season despite having a future Cup champion at the helm. Of course, Gibbs’ team did win the first race of his sophomore season, and that win was about as big as they come: Dale Jarrett won the 1993 Daytona 500 driving a JGR-prepped Chevy. Over the years, other Cup teams that started with great expectations failed to win a single event before pulling the plug.

Think this ownership deal is easy? You might want to seek out and speak to some who failed. Let’s take Geoffrey Bodine as an example. He bought the assets of the No. 7 team after the tragic death of Alan Kulwicki in April 1993. Keep in mind that team was the reigning championship outfit from 1992. Bodine bought the team and began driving for it at Dover in the fall of 1993. Sure, Alan had barely beaten Bill Elliott for the 1992 title, but it was, in fact, a championship team still led by the crew chief whose brilliant strategy during the 1992 season finale at Atlanta Motor Speedway clinched the championship. Bodine won three Cup races as an owner/driver in 1994; Pocono Raceway, Michigan International Speedway and North Wilkesboro Speedway. He won again at Sonoma Raceway in 1996 and that was it for the No. 7 team. They were purchased by the end of 1998.

No less an authority than the King, Richard Petty once famously said there’s no easier way to make a small fortune in racing than to start with a large one. Truer words have never been spoken. You want to have a skilled calligraphist write those words on a piece of parchment, frame that document and put it on your nightstand so that it’s the first thing you see every morning upon waking. You can assume as you try to get this venture going you’re going to be writing a bunch of checks so large they’ll make even your head spin.

Going into your first season with unrealistic expectations will only lead to much frustration. I can only speak for myself, but when I get frustrated, it tends to lead me to get angry. And as we all know, anger is no friend of accomplishment.

Who knows? I could be wrong. It happens occasionally. I have references. Don’t confront me with my failures as I have not forgotten them. Maybe your new team with Bubba Wallace will win the first five races of the 2021 season, though I highly doubt it. Here’s the thing. To the best of my knowledge (and again, I don’t follow the sport), in basketball every game one team will win while another will lose. (There’s no ties, right?) That’s what, a 50-50 shot? But in stock car racing, every week just one driver and team will win while 39 others will lose. That’s less than a 3% chance, all other things being equal. And in stock car racing, rarely are all other things equal.

Everything I know of importance in life I learned from either the Bible or 1980s and 1990s FM radio. (The Books of the Boss, The Book of the Dead, the Book of Bob Seger, the Book of Tom Petty, etc.) Chief among those lessons was, ”Even the losers get lucky sometimes.”

Most of all, I’d love to see you keep your expectations in check and enjoy the process as it unfolds. Contemporary stock car racing is just too damned expensive and time-consuming for it to become nothing more than a headache and a heartache for a team owner. Overwhelming stress is the sign a massive garage sale offering racecars, tools, equipment and the hauler for a dime on the dollar is imminent. Stick with it and maybe you’ll one day join the top tier of team owners in the garage.

But the waiting is, in fact, the hardest part.

BOWLES: The incredible progress of NASCAR Diversity in 2020… in just six months

Nice articles and a lot of wisdom too.

Only this statement seems a bit, for lack of a better word, idiotic… “when the TV says there are five minutes left to play in a game and the event drags on another half-hour or more due to timeouts, fouls and official reviews I get bored.”

I’ve seen lots of NASCAR races where there were 3 laps left for an hour thanks to the GWC rule. Watch out throwing those rocks.

I’ve had a day to come up with a better word, instead of idiotic let’s say short-sighted.

Thanks for nascarsplaining the challenges of starting a new team

Great piece. I’m all for anyone who tries whether politely or impolitely to slap that arrogant smug smirk off of Jordan’s face. I expect he’ll barely last 3 years with Wallace driving for him before he sells the team.

I loved the article,right down the line with my thinking.Im waiting for Erik Jones to give the 43 a run or to before i make a decision whether Bubba will ever win a race