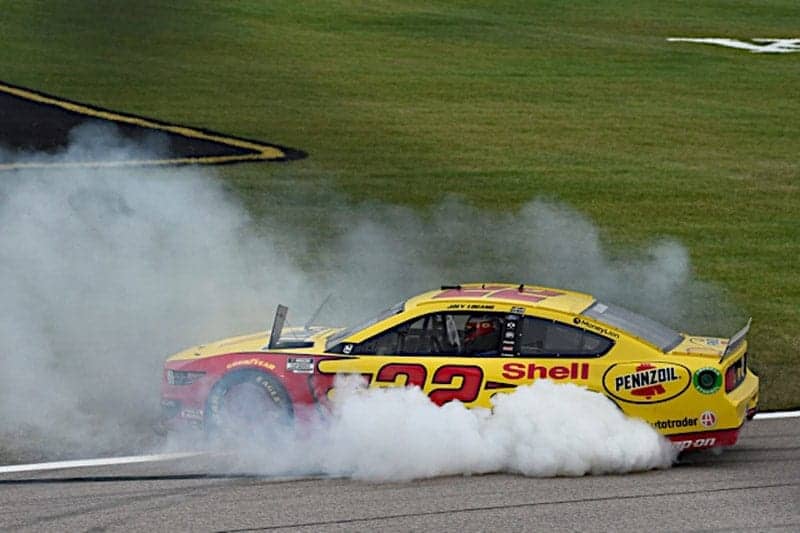 Following Joey Logano’s win on Sunday (Oct. 18) at Kansas Speedway, he now will focus on the championship race at Phoenix Raceway in just a few weeks.
This will be the second time in the last three seasons that Logano will be part of the Championship 4 and his fourth time overall. The last time he was included in that group, he won the title. Many have said this has a 2018 feel to Logano’s season when he won it all, so the question here would be: How does this season compare to that?
Is Logano more of a threat now than he was at Homestead-Miami Speedway two years ago? What similarities do you see in his performance from then? After winning at Phoenix back in March, what chance do you give him against the likes of Kevin Harvick and Denny Hamlin (assuming they make it there)?
Chase Elliott has had a brilliant first five seasons of his Cup career. He has accomplished a lot just in the last three years since he captured his first win at Watkins Glen International. He has shown everyone that he can win on any type of track, whether it was being king of the road courses, scoring the All-Star Race win at Bristol Motor Speedway or winning at Talladega Superspeedway in 2019. With 2020 looking like one of his strongest years yet, he has an excellent chance to make it to the championship race in Phoenix. If he does and wins the title, he will be the among the youngest drivers to do so in the history of the sport.
Where would Elliott stack up against the all-time greats to start his career? It’s too early to talk about all-time greatness, but what would the start of his career mean for the rest of it? Could he be better than his dad, Bill Elliott?

Q: What similarities do you see in Joey Logano’s 2020 season versus his 2018 championship season? Russell M. Portland, OR

A: While he was more competitive in 2018 versus now (13 top-fives finishes then, to 10 now, 26 top 10s compared to 18), Logano still has many similarities in 2020 to his championship year. The only statistic that is about the same are the wins, which are what matter most. Other than that, 2018 takes the cake.
However, if you have watched the No. 22 team this season, it’s been in position to win some races, but things just seem to sometimes go wrong. Team Penske overall has been extremely strong all year, with all three cars qualifying for the playoffs, in addition to its satellite team, Wood Brothers Racing.
Prior to the COVID-19 pandemic, Logano seemed to be unstoppable to start the year. Winning two of the first four races was impressive, both of which he seemed to have among the best cars there. It truly looked like it could be his best year yet. But when the return to racing happened in mid-May, something just did not click in the same way.
Even while advancing to the championship race at Phoenix, Logano is currently tied for his least amount of top fives in his career at Team Penske and his second fewest amount of top 10s. His worst year came in 2017 when he had only 10 top-five efforts and 17 top 10s. He is currently at 10 top fives and 18 top 10s through 33 races, so the statistics look more similar to that year that he missed the playoffs than they did when he won the title.
We know the format rewards winning, and that is what Logano has done three times now this season, including his biggest one this past weekend. As long as you win when you need to, you can be mediocre throughout the course of the season. Some like that, many do not, but that is the current landscape of NASCAR racing.
With three races remaining, do not expect Logano to cool off. Momentum will be key heading to Phoenix in three weeks, and he will certainly build that at Texas Motor Speedway and Martinsville Speedway. The statistics do not mean much with the playoff format, but if he runs like he did at Phoenix in March when they get back there, he may be very tough to beat. Could he become a two-time champion at only 30 years old? Sure, it very well could happen.
Q: If Chase Elliott wins the title this season, how would you rate the start of his first five years compared to the all-time greats? Larry L., Bakersfield, CA
A: Statistics show that Elliott is having one of the best starts to a career ever. While he did not win in 2016 or 2017, having nine wins at this point is super impressive. There was a time back in the middle of 2018 before he won Watkins Glen that people believed he was cursed and was never going to win.
Once he captured that first win though, he has been ultra consistent ever since. While he does not have a trip to the Championship 4 yet in his career, he has come super close every year, as this is his fourth time advancing to the Round of 8. This could be the year though that NASCAR’s most popular driver makes a run for the championship race, as he’s among the quickest cars weekly.
Hendrick Motorsports as a whole has not had a driver in the Championship 4 since Jimmie Johnson back in 2016 when he won his record-tying seventh title. This same No. 9 team had a berth the year before in Jeff Gordon’s final season when they were the No. 24 team, but ultimately came up short to Kyle Busch.
Elliott is already proving that he could have a special career, especially at such a young age of only 24. A lot of the best drivers in NASCAR history had not even begun their Cup careers at that age, yet he already will have five years under his belt once this season is over.
To say he will be an all-time great is jumping the gun way too much, but if we look at his career so far, it is possible he will reach that status in the far distant future. Even if he does not win the title this year, there is plenty of time left to do so. His father, Bill, only captured one title in his career, but many believe, including myself, that Chase can be a multi-time champion in this sport.
This season has proven what kind of driver he is and that the No. 9 team can win basically anywhere the circuit goes (despite 66.6% of its wins this season coming on road courses). Everyone knows Elliott is the man to beat at road courses, but he also has wins on short tracks and intermediates and one on a superspeedway.
As for this year, Elliott has a great chance to compete for the championship at Phoenix, one of his best tracks on the circuit. If he makes it, he will most definitely be a threat. If you had to rank young drivers in the sport right now, I do not see any reason in the world why Elliott would not be at the top of the list. He is the best driver age 25 or under currently and will only get better with more experience.
Sign up for the Frontstretch Newsletter