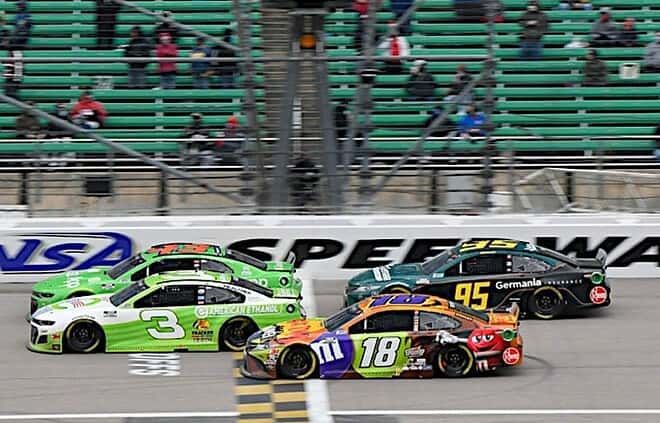 What was it about Sunday’s (Oct. 18) race that left people with strong feelings, both good and bad? Was it the fact that Joey Logano, a driver who came into the weekend with just one win, is now running for the championship? Is it the fact that for the last 40 laps of the Hollywood Casino 400 Kevin Harvick tried to chase down Logano but, because of the way the air flowed between his car and Logano’s, he was barely able to get alongside Logano, let alone pass him?

Whatever the reason, suddenly the buzz about NASCAR’s 550 HP package that is used for most of the 1.5-mile tracks and above had changed. Fans on social media began to wonder if this package was the one NASCAR should move forward with on 1.5-mile tracks.

This package was introduced at the start of 2019, and while some will argue that this package was never loved from the beginning, there was a clear indication that the package was generally accepted by the fan base. NASCAR’s Executive Vice President Steve O’Donnell has released data stating that, according to their research, 80% of the fan base likes the 550 HP package.

Those numbers certainly weren’t true if you were scanning social media after Sunday’s race. With NASCAR’s new car being delayed until 2022, we’ll have this package for one more year, and that got us thinking.

Is it time for NASCAR to change the 550 HP package? We pitched this question to our writers, and Mark Kristl and Vito Pugliese volunteered to offer their takes and discuss what they think NASCAR should do moving forward.

There’s No Sense in a One-Year Change

I agree that this package is not good. But making alterations to it for only one year, especially after teams financially suffered due to the COVID-19 pandemic, makes no sense. NASCAR has helped a lot of teams recover from the economic blow; changing a package and adding costs negates all the hard work the series has done.

Right now, teams aren’t practicing or qualifying, and NASCAR currently plans to keep that format for some races in 2021. Teams have put in a lot of work to gather setup data with no practice sessions. If NASCAR changes the 550 HP package after just one year, they’ll have wasted time and money.

This year has been a struggle for many teams. Take Germain Racing and Leavine Family Racing, both of which will shut down at the end of the season due to lack of sponsorship, or the incoming teams that have already started prepping for next year. Adding extra costs by changing the package makes the problem of NASCAR’s expenses worse, and new teams will have yet another thing to learn.

And while we criticize this package, there are instances where it has not been an utter failure. On the intermediate race tracks, this package has made the racing better, especially early in runs. A new package will also have its ups and downs depending on the type of track.

Instead of making changes to the package, costing teams money and complicating races for crew chiefs, NASCAR could look to other options to improve the quality of racing: changing the schedule, alter race length, eliminate PJ1, etc. All of those options could be implemented next year.

The NextGen car isn’t far off, and it looks to solve the problems we’re having. Why change this package for one year when something brand new – and possibly better  – is coming in 2022? – Mark Kristl

This weekend’s race at Kansas Speedway was another playoff race where Joey Logano was a story line leaving the event. No, he didn’t get into it with Matt Kenseth again, but he did make the No. 22 too wide for Kevin Harvick to pass in the closing laps. It was another race where blocking took precedent over passing, which makes me ask – is this power level sustainable in the long term for the pinnacle of North American stock car racing? I don’t think so.

NASCAR has been reducing power for five years, eventually bringing it down to the 550 HP package for one-mile or longer tracks. We’ve seen a slew of just-OK finishes that both the power problem and some aerodynamic problems have been unable to solve.

Several years ago, NASCAR determined the problem with the inability to pass was the fact that corner speeds were too high. It tried many configurations: high drag/high horsepower, low drag/high horsepower and ultimately where we are today, low horsepower and reduced downforce. What has resulted has been an uninspiring result, producing frantic passing for five laps after a restart, and then cars running wide open, barely breathing it in the corners. Corner speeds are up, and with four engine suppliers powering the field, the horsepower equation has been equalized and rendered nearly bulletproof, to the point where attrition has become an afterthought.

I understand the decision to pause on any major horsepower wars at the moment. NASCAR did its damndest to piece together a season after a pandemic that nobody could have possibly predicted. So, if the upcoming platform has to be 550 HP, why isn’t the engine being used a crate engine from each of the manufactures that is representative of a production offering? Why worry so much about regulating race cars when you can just give them the machinery its stock counterpart will leave the lot with?

Anybody with a 650 FICO score can walk out of a Ford, Chevrolet, or Dodge dealership with a 650-800 horsepower car today – and has been able to for the last five years. Fiat Chrysler is more than happy to shove 700-horsepower engines in their trucks and SUVs for that matter. Even the more pedestrian version of the street going NASCAR inspirations are tickling 500 horsepower with a 36,000 mile warranty. Throw some basic speed parts at it, and you’ve got an actual STOCK production engine racing series to market around. I’m sure Toyota could figure something out with their 13-year old truck engine, and still meet the pedestrian power ratings that are being laid down.

With a move towards shorter tracks and road courses, it feels like NASCAR is moving more towards a series that can sustain what stock cars are actually laying down today. – Vito Pugliese

Clayton has been writing NASCAR for the last seven years and has followed the sport for as long as he can remember. He's a Jersey boy with dreams of hoping one day to take his style south and adding a different kind of perspective to auto racing.
@cgcaldwell89
Previous From Louisville with Love, Part I: Ben Rhodes Talks Playoffs, 2 Weeks with Junior Joiner & Kentucky Travels
Next Romain Grosjean, Kevin Magnussen Leaving Haas F1 Team After 2020