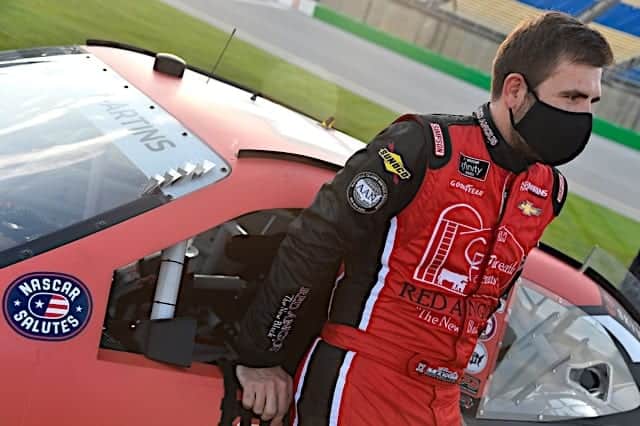 Around this time last year, Tommy Joe Martins found himself in a predicament: he had funding but nowhere to go.

At the time, he was competing part-time for Carl Long at MBM Motorsports in the NASCAR Xfinity Series, making the swap from BJ McLeod Motorsports over the summer. Martins was told MBM was scaling back from three full-time cars to two for the 2020 season and the team wouldn’t be able to have him on board – the team ended up running three entries, one being a start-and-park – and he needed to find a ride.

Instead of bringing his money to another team, Martins decided to revamp Martins Motorsports, his family-run operation, spearheaded by the Mississippi native and his father Craig.

Flashback to 2014. Martins Motorsports competed in 11 Xfinity races with a best finish of 14th at Talladega Superspeedway. All of the other finishes were 30th or worse, and adding to the madness, Martins failed to qualify for six events.

Since then, the team dipped its toes into the Gander RV & Outdoors Truck Series, running the full 2016 schedule. As a driver, Martins finished 22nd in the season-long points standings.

Starting the team back up this season was going to be a tough hill to climb with just four full-time employees and four chassis at the beginning of the season. Nonetheless, Martins threw out a lofty goal, hoping to finish in the top 20 of the championship standings, both as a driver and owner.

But surely there would be disturbances along the way, and that began right off the bat when the team didn’t qualify for the season opener at Daytona International Speedway.

“Monetarily, that’s the biggest paying race of the year,” Martins recently told Frontstretch. “It wasn’t just missing out on the biggest pay day of the year at Daytona, but also potentially – and it did effect us – missing some extra money and extra races down the road because we got so far down in the points. We really had to dig our way out of it.

By missing Daytona, Martins’ first race of the season was the following week at Las Vegas Motor Speedway. There he had an engine failure, finishing a disappointing 32nd. The next race at Auto Club Speedway, the team picked up its first top-20 finish of the season, placing 18th after catching fire in practice earlier in the weekend.

The train was starting to get on the tracks until Martins had a battery issue at Phoenix Raceway, relegating him to 28th, six laps off the pace. That led to tense moments for the driver/owner.

“You start questioning what you’ve done when you’re in that moment,” Martins said. “It’s hard for me to express what it’s like to be an owner and a driver in a really tense situation like that. I’ve done a pretty bad job of it at times because I’m aware of the finances and how much it takes to go into it. When you’re having those kind of mistakes, you want to say it doesn’t affect you as a driver, but it’s absolutely affected me at times this year.

“I want to get back to being a racecar driver first, and just trying to compete and do the best we can.”

Six days after the 200-lap event at Phoenix, the race weekend at Atlanta Motor Speedway was postponed due to the ongoing COVID-19 pandemic. Three days after that (March 16), NASCAR announced it would follow CDC (Center for Disease Control and Prevention) guidelines, halting the sport for eight weeks.

That led to a tough decision for Martins.

“We had to lay everyone off, and we weren’t the only [team],” Martins added. “With no income coming in, we primarily run off the prize money, like a lot of these teams. In a way it was a reset and I would like to say that really helped us, but it clearly didn’t. It probably was what we needed, but I don’t think we responded to it very well. When we lay everybody off it’s hard to get any better.”

Regardless, 75 days after its last race at Phoenix, the Xfinity Series visited Darlington Raceway for a Thursday matinee (May 21) to restart the 2020 campaign. Engine issues halted the No. 44 team, crossing the finish line in 26th. But the next race on Memorial Day at Charlotte Motor Speedway four days later, the team showed real speed, running inside the top 10 until a lap 197 restart when Noah Gragson got loose underneath Harrison Burton and Brandon Jones, triggering a five-car pileup in which Martins took the biggest hit into the inside wall.

“It was devastating in a lot of ways,” Martins said. “It wasn’t just losing a car and basically wiping out $50,000 in damage to a racecar, but when you only have a team of four people now they have to build another car during the year, now that’s almost impossible.”

The team scored its second top-20 finish of the season in the second race of a doubleheader weekend at Homestead-Miami Speedway. Martins backed that up with his first top-15 finish of the season at Talladega, only to have three consecutive DNFs at Pocono Raceway, the Indianapolis Motor Speedway road course and Kentucky Speedway.

Those finishes, too, were devastating.

But beginning at Texas Motor Speedway, the No. 44 car went on a streak of four consecutive top-20 results, including a season-best run of 13th at the Daytona road course. In that same timeframe, Martins welcomed NASCAR veterans Buddy Sisco and Frank Kerr to take over the crew chief role and day-to-day operations of setting up his hot rod. All the while, Martins was disappointed to relieve Danny Johnson of his duties after the 17th race of the season.

“It was probably better to spend the money and get great people than to keep losing money and not having enough people,” Martins said of the move. “[Sisco and Kerr] turned things around from a reliability standpoint. […] Up to that point of the year, it was really tough.”

Kerr had been sidelined since the first weekend of the season at Daytona when he sat atop the pit box for Ross Chastain at Niece Motorsports in the Truck Series. Since then, Kerr “shattered” his leg in early June, falling off a ladder onto concrete from approximately 13 feet in the air.

Then this opportunity arose.

“All you’ve got to do is work on processes, teaching people how to do things right and figured I’d go talk to them,” Kerr said of what he was told of the opportunity. “We’ve changed the cars a lot since I’ve got here, an unbelievable amount really, just trying to get them on the right path.”

Since Sisco and Kerr came on board, Martins has shot five positions up in the driver standings, currently ranked 20th. Competing in 13 of 30 races together this season, the No. 44 team has scored 42 more points in four fewer starts apart (238 to 196).

The recent surge is what the No. 44 team needed, now sitting 22nd in the owner’s standings. It’s only 62 points outside the top 20, currently nailed down by the No. 4 car from JD Motorsports.

The team considers a top-20 finish a successful day, especially in a competitively deep mid-pack lineup in Xfinity.

This past weekend at Kansas, the team had one of those “great” days, finishing 14th, a career-best for Martins on an intermediate track. This season has also been the first of Martins’ career in which he can utilize the freshness of sticker tires on a consistent basis.

With eight top-15 finishes in 30 races, Martins, the owner and driver, believes it’s been a respectable first season filled with missed opportunities.

“I would say it’s like a B-,” he stated. “I just feel like we really started off tough. […] Statistically this is the best year I’ve ever had in NASCAR. But I look at it and go, ‘Man, that stat of [eight] top 15s could probably be almost doubled if we were able to finish some races earlier this year.'”

Solid numbers for not having a done deal until late December. Back then, Martins wasn’t sure if it would be a mistake to start up the team, solely because of how much money it takes to run a competitive car. Sure, he was getting the opportunity to drive full-time, but it hits the pockets deep.

Ten months later, he says the team is in a comfortable position.

“I think we’re in a better spot than I thought we’d be in,” Martins said. “I think I personally would be happier racing for someone else – this is Tommy Joe Martins the driver where you don’t have to worry about anything, you just show up and drive the car.

The No. 44 team will return to Xfinity in 2021, hoping to improve on its starting point this season. Kerr believes the team needs to have all its duck in a row come Daytona in February.

“We need to have more inventory in cars and pieces,” he said of 2021. “You can do it all with less people if you have more parts. If you have a few more cars built up and ready, if you tear one up, you’re not thrashing to get one turned around and head back to the racetrack. We need to have more cars, more parts and improve on motors a little bit over the winter, maybe add a person and that would definitely help.”

But before thinking about 2021, Martins wants to simply end the 2020 season strong.