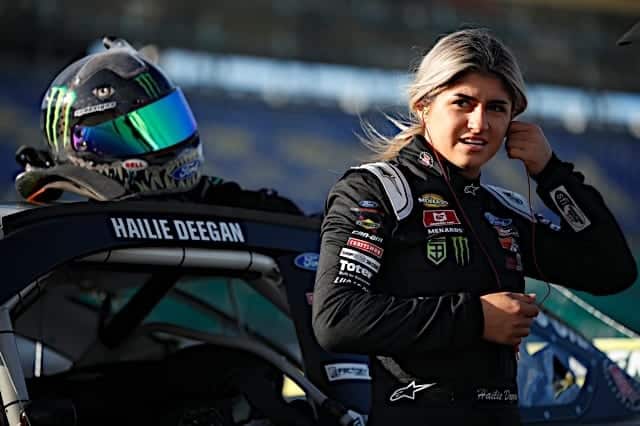 In this week’s edition of the Frontstretch Podcast, Dustin Albino and Mike Neff discuss their continued frustration with the 550-horsepower NASCAR Cup Series package. In Sunday’s Cup race at Kansas Speedway, Kevin Harvick trailed Joey Logano for over 40 laps and was never able to pass for the lead, though clearly having the quicker racecar.

The duo chats about the new way of racing: blocking, as Logano did a masterful job and clinched his spot in the Championship 4 race at Phoenix Raceway.

Meanwhile, Chase Briscoe dominated the Xfinity Series race, securing his spot for Phoenix. He continued to have a winning week, as he was announced the driver of the No. 14 car for Stewart-Haas Racing in 2021. The duo also digs into the violent wreck that occurred, as Justin Allgaier turned Anthony Alfredo while racing on the apron. How avoidable was the incident?

In the Gander RV & Outdoors Truck Series, Brett Moffitt picked up his first win of the season, punching his ticket to the championship race at Phoenix. At the same time, many eyes were on Hailie Deegan, who made her series debut.

Silly season is in full swing, as Kyle Larson has been reinstated by NASCAR effective Jan. 1, 2021, and is linked to Hendrick Motorsports. Erik Jones will pilot the No. 43 Chevrolet at Richard Petty Motorsports, and Justin Haley will return for a third full-time Xfinity season with Kaulig Racing.

Finally, Deegan joins the show to relive lessons learned from her first Truck start, being a Ford Performance development driver and having the final say in her career.

OK guys if you want to do Hailie a favor don’t beat us over the head with her by writing 5 (or even 2) articles about her every week. Fans hate when you do that and that hate transfers to the driver. So do everyone a favor and stop casting the spotlight on her just because of her gender. When she does something notable besides just showing up (a top 10, a win, a pole, a notable wreck, etc.), then by all means write 5 articles about her that week. For the record my view of Haillie right now is positive but it won’t be if you keep shoving her down my throat every day.