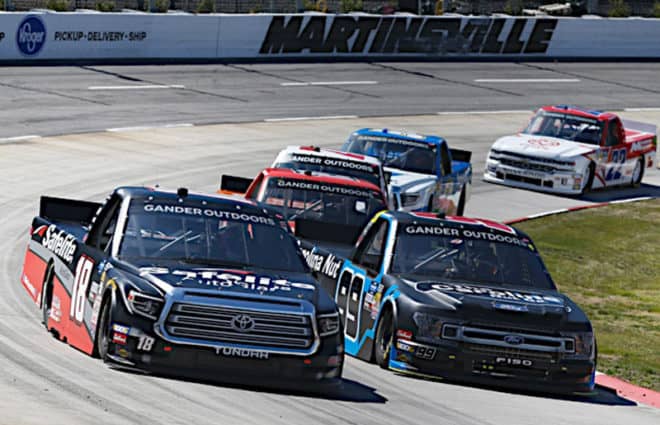 The penultimate NASCAR Gander RV & Outdoors Truck Series race of the year will take place at Martinsville Speedway, and 38 drivers will compete in the NASCAR Hall of Fame 200, barring any entry list changes.

NASCAR Xfinity Series playoff driver Brandon Jones will make his fourth start of the year in the No. 51 Kyle Busch Motorsports Toyota. He won earlier this year at Pocono Raceway.

Sam Mayer will his fifth start of the season driving the No. 24 GMS Racing Chevrolet. He notched his first career Truck Series victory in his most recent start at Bristol Motor Speedway.

Spencer Davis returns for his 12th start of the season. He will wheel his No. 11 Toyota in his second career start at Martinsville.

The Nos. 00 and 33 of Reaume Brothers Racing are listed as drivers TBA.

The final race of the Truck Series Round of 8 will take place on Friday, October 30 at 8 p.m. ET with TV coverage provided by Fox Sports 1.

Mark joined Frontstretch at the beginning of the 2019 NASCAR season. He is an Eagle Scout & a proud University of Dayton alum. He also writes about NASCAR for Beyond the Flag.
@MarkKristl
Previous Denny Hamlin, Michael Jordan Team Named 23XI Racing, Bubba Wallace to Drive No. 23
Next Entry List: 2020 Draft Top 250