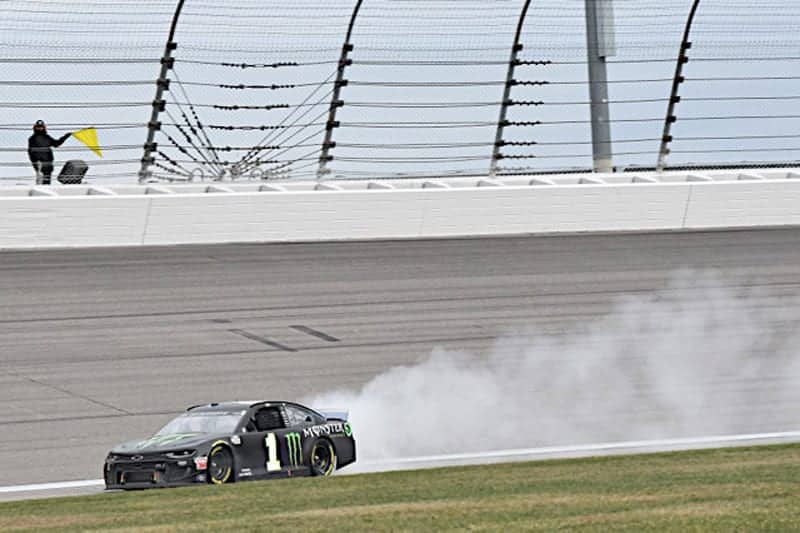 The clock may have struck midnight for Kurt Busch, the Cinderella of the 2020 NASCAR Cup Series playoffs. The 2004 champion is now 73 points below the Championship 4 cutline after experiencing a blown engine this past weekend at Kansas Speedway.

But was it simply just misfortune, or was there more to it than that?

Chip Ganassi Racing switched to using Hendrick Motorsports engines following the 2012 season. Prior to that, the team had Ernie Elliott build its motors from 2001-08 before getting engines from Earnhardt-Childress Racing following the switch from Dodge to Chevrolet and the merge with Dale Earnhardt Inc.

CGR had 28 blown motors during its Elliott era, but equipment also wasn’t as durable then as it is now, and parts failed more regularly. Jimmie Johnson, for example, has dropped out of 14 races due to engine troubles during his Cup career. Nine of those occurred between 2002-08. This shows that Hendrick’s engines were more durable than Elliott’s back then and that they are even more durable today.

Ganassi’s team then had seven engine failures during its four years with ECR before moving to Hendrick. In the first two years with HMS power, Ganassi didn’t have any issues. The Nos. 1 and 42 didn’t make the playoffs those years, either.

But since 2015, CGR has had seven engine failures. All seven have occurred during the last 10 races of a season. Meanwhile, Johnson hasn’t had a single blown Hendrick motor in his last five seasons.

The one in 2015 didn’t have much of an impact. It happened at Talladega Superspeedway, three races after Jamie McMurray had already failed to advance to the Round of 12. Plus, that postseason was also when Johnson’s last engine failure occurred.

The following year, though, McMurray entered the Round of 12 cutoff race at Dover International Speedway just five points below the cutline. But engine trouble in that race knocked him out of the playoffs. Johnson and Chase Elliott, who were also racing for a Round of 12 spot with a Hendrick engine, had no such issues and moved on. That instance could be chalked up to coincidence, and the Hendrick duo was likely to hold their standing above McMurray anyways.

The 2017 playoffs is where it gets a little more shady. McMurray and Kyle Larson both advanced their CGR cars into the Round of 12 over Hendrick’s Kasey Kahne. McMurray crashed out in two of the next three races to eliminate himself, but Larson was sitting pretty for the Round of 8, 29 points over the cutline heading into the cutoff race of Kansas Speedway. But Larson’s engine failed at Kansas, allowing Johnson to make it into the Round of 8 over him.

McMurray missed the playoffs the following year, and Larson was eliminated after the Round of 12. But Larson exited the fall Martinsville Speedway race, the first Round of 8, with an engine failure. So if he had advanced to that round of the playoffs, an engine problem likely would’ve knocked him out again.

In 2019, Busch, after taking over the No. 1, had a quick exit from the playoffs. Larson made it all the way to the Round of 8 this time, but didn’t perform well enough to make the Championship 4. But had he, he probably wouldn’t have won the championship, because the engine let go at the championship race at Homestead-Miami Speedway. Granted, Hendrick’s William Byron also had an engine fail in that race and Elliott had engine troubles earlier in the 2019 playoffs.

Fast forward to now, and the most recent Ganassi engine problem has put Busch in a points hole so big he’ll likely have to win one of the next two races to advance. This has led to theories and conspiracies saying that Hendrick is intentionally giving Ganassi faulty motors in the playoffs to increase the odds of an HMS driver winning the championship.

Is that the case? Probably not. I’m sure the guys at the CGR shop look over every inch of the engines they get from Hendrick. If these engines were built to fail, don’t you think they would find whatever the problem was before the race?

Ganassi is likely getting worse engines than the Hendrick cars because HMS isn’t going to give away the cream of the crop to a competitor. But the Hendrick engine shop does want the engines to do well for CGR because it wants to keep its customer happy so they’ll keep buying.

It isn’t good business to trade customers for a slightly better shot at a championship. Hendrick has only won one title since Ganassi started having the engine troubles in the playoffs, and that was in 2016 when Johnson only won it because Carl Edwards and Joey Logano took each other out. The team hasn’t made it back to the Championship 4 since, so Ganassi’s problems obviously aren’t benefitting it much.

It more likely has something to do with the way the CGR shop is tuning the engines or setting up the transmissions in its cars. With it being the postseason, it might be trying to get a little extra performance out of the cars, sacrificing durability in the process.

But it’s much more fun to say that Hendrick is sabotaging Ganassi in the playoffs. Why let the facts get in the way of a good conspiracy theory?

This whole scenario wouldn’t even exist if the top couple teams didn’t build the engines for majority of the field, if everyone was buying their engines from an outside source against whom they weren’t competing. That has happened now in the Gander RV & Outdoors Truck Series and ARCA Menards Series with the Ilmor spec engines.

The only problem with Ilmor is that it is pretty much a monopoly. Teams should have at least a few options for outside vendors. Engine vendor competition would lower the cost of the engines and keep the vendors striving to keep making their products better. Something like that could cause mix-ups in the running order, or maybe one engine supplier is faster one week and a different one the next.

Regardless, as NASCAR moves into the NextGen car in 2022, hopefully the business model for engines in the Cup Series will be shaken up. That way, if another Ganassi engine is blown in the playoffs of years to come, no one can even think about blaming a competing team.

Hendrick has always been a snake remember when he played sick so he would not have to go to prison,

The only man history to gain 50lbs dUsing chemo

Nope…CARL DOVE DOWN ON JOEY TAKING HIM OUT! Sorry…..YOUTUBE IS YOUR FRIEND. Love the disinformation always flying around regarding Logano. No way JIMMIE earned that one…but it fit the NASCAR built up narrative of 7 TIME weeks before the damn race even started. Cousin did go and apologize to Toad. So chomp on that..what does that tell yah?

your mother
Reply to  kb

Might be more useful if you could stay on topic when commenting, and don’t write like you are jacked up on meth.

oh my gosh…..someone been watching too much politics this week?

“It more likely has something to do with the way the CGR shop is tuning the engines or setting up the transmissions in its cars. With it being the postseason, it might be trying to get a little extra performance out of the cars, sacrificing durability in the process.”

So you have basically admitted that this article was fiction.
Trying to get a job with one of the 24 hour news channels?

I never understood the theory in depending on your competitors for equipment. Now add Childress to the list next year of depending on Hendrick for engines.

Bill B
Reply to  Anne-Marie

The theory is you save money by not having to develop your own engine program and hire a bunch of expensive technicians to design, build and maintain them. If you are a 3rd tier team and want to get to the 2nd tier, it makes more sense to lease proven engines from top tier team. Now, if you want to be a 1st tier team then you probably need to bite the bullet and build engines. At least in the past, now the model is different as noted below….

As for Chevy, I’ve been wondering how long it was going to take before they woke up and adopted the model both Ford and Toyota have been using for the last decade. All their engines are made by one shop. It makes no sense for Chevy to have to support/fund two competing engine building shops. They can pool that money, gain economies of scale and cut costs by only having one. BTW, you do realize that both Penske and SHR run Roush-Yates engines and both have had success, so this could benefit both Ganassi and Childress. It’s also important to realize that the engine is only one component that makes a team successful.

A lot of people are seeing black helicopters circling over them.

It is interesting that Chevrolet Racing has recently made the motor programs for ECR & HMS join their R&D together. I think it is the first step into having Chevy do what TRD does for Gibbs and Roush-Yates does for the Ford teams, which will be one-stop shopping for Chevy Cup, Xfinity & Truck engines in the near future.

As for the blown Hendrick engines at Ganassi, I think it was just a coincidence. Why would Chevy allow Hendrick to sabotage one of their 3 remaining cars in the semi-finals? Chevy has been on a long dry spell when it comes to championships, you’d think they’d want to maximize their chances to reverse that slump.

RE: Chevy has been on a long dry spell when it comes to championships

After watching Johnson win 7 in 10 years, not long enough.

Aren’t all Truck engines built in the same munitions plant?

It’s been far too long since a new engine builder came along. You would think that Gene Haas would venture into engine building, what with his CNC equipment and all…