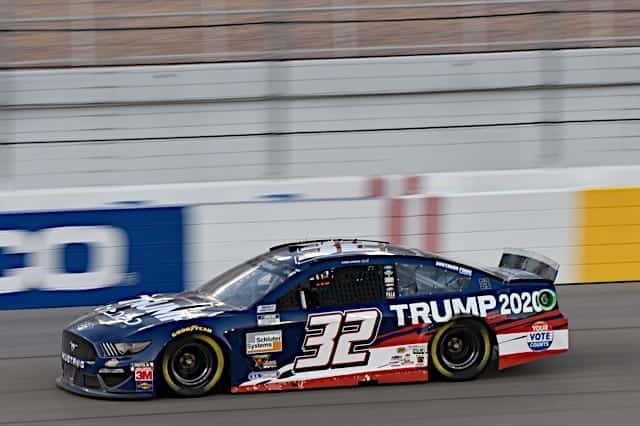 Go FAS Racing will not run full time in the NASCAR Cup Series next year, the team announced Thursday (October 22).

After seven seasons of full-time competition with its No. 32 car, the team will only compete part time next year.

“It has been a lot of fun over the years but with the evolution of life, your priorities change,” team owner Archie St. Hillaire said in a statement. “With my son [and GM of Go FAS] Mason moving on to start his own business in a different industry and myself getting ready to spend time with my daughter having my first grandchild, I feel its time to reevaluate the next chapter of my life. It definitely has been great working with Ford and all of our great marketing partners over the last 10 years and we look forward to continuing with them on a smaller scale going forward

The charter used by the team will be taken by charter co-owner Joe Falk, who will in turn reportedly partner with Matt Tifft and BJ McLeod, Catchfence reported. An official announcement has not yet been made.

According to team members, Go Fas Racing told them it has sold its charter to Matt Tifft/BJ McLeod. Go Fas will run select races next year. Go Fas working with teams to land employees jobs. Tifft declined to comment to me this morning when asked about it. St Hilaire comments: https://t.co/y0lKWRiqtr

McLeod runs three full-time NASCAR Xfinity Series teams and fielded a part-time entry in the Cup Series for the first time this year. Tifft was a regular competitor in NASCAR, including for Cup Series Rookie of the Year before health issues sidelined him as a driver.

“Joe Falk of Circle Sport will continue to own half of the charter we currently run and we will be transferring our ownership in our half of the charter at the end of the season to Joe’s new partner who will be announced in the coming days,” St. Hilaire told Catchfence. “We will continue our partnership with the Wood Brothers Racing team on our other charter moving forward into the future. We look forward to the 2021 season.

“I can’t say enough about how NASCAR has built and maintained their business model during the current pandemic and how exciting the schedule looks for 2021,” he continued. “We will keep four to five cars and anticipate running five to six races in 2021 at tracks we enjoy and make financial sense.”

GFR also will continue to lease its other charter to Wood Brothers Racing, which will field Matt DiBenedetto in the No. 21 in 2021 before Austin Cindric succeeds him in 2022.

Corey LaJoie has driven for GFR for two years. He currently has one top-10 finish this year, an eighth-place showing in the Daytona 500. LaJoie also earned the best-ever finish for the organization with his sixth-place result in the 2019 Coke Zero Sugar 400 at Daytona International Speedway.

Earlier this year, LaJoie and the team agreed to part ways after this season; LaJoie has not announced his plans for next year.